During the bi-annual fashion week shows, it´s not uncommon to feel disconnected from nature when dashing past Paris´ Eiffel Tower or Milan´s Duomo. However, spectators at Mary Katrantzou’s Spring/Summer 2020 were given the chance to take in the cobalt hues of the Aegean Sea with the most spectacular vistas. From 200 ft above sea level and perched amongst the 16 Doric columns of the Temple Of Poseidon, Katronzaou presented her seasonal offerings from the pinnacle of Greece´s Cape Sounion.

Fast forward several thousand years and instead of women in ancient finery, presenting offerings to Poseidon’s tempestuous trident, models floated beneath the temple’s colonnades in captivating and painstakingly crafted creations (barely fit for mere mortals.) Greek born Katrantzou was the first ever designer to have permission to showcase within a landmark monument from the ´Golden Age Of Athens.´ Katrantzou’s testament to modern magnificence commemorated her home city alongside the 30th anniversary of Elpida – Association of Friends of Children with Cancer. 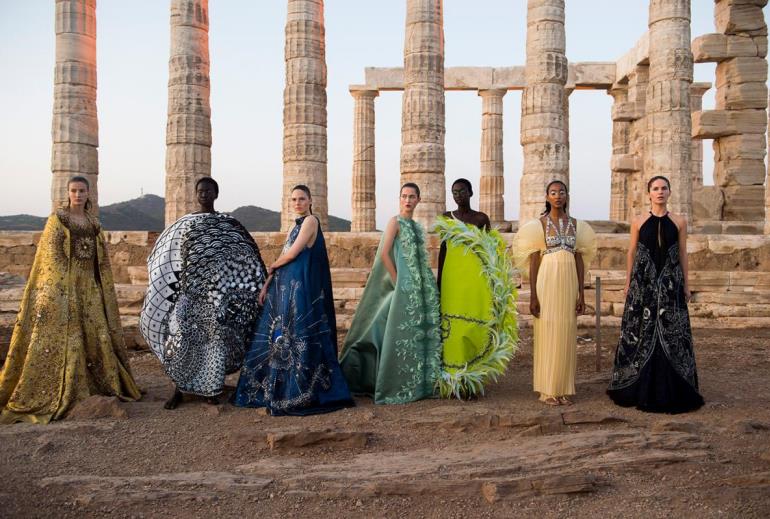 Our pieces have a couture level of craftsmanship, in which we reference Athens’ Golden Age. Our caped dress was hand beaded with lines of numbers, in an allusion to Archimedes’ Pi, and a delicately fringed gown which was embellished with Aristotle’s tenet ‘Everything happens for a reason.’ This season, dresses were festooned with beaded constellations of the night sky, fantasy world maps, ruffled fronds of silk, 3D florals and swirls of feathers. Delphic pleats cascade across the shoulders, and silhouettes come in straight columns, as layered lampshades or as bright, floating orbs. – Mary Katrantzou 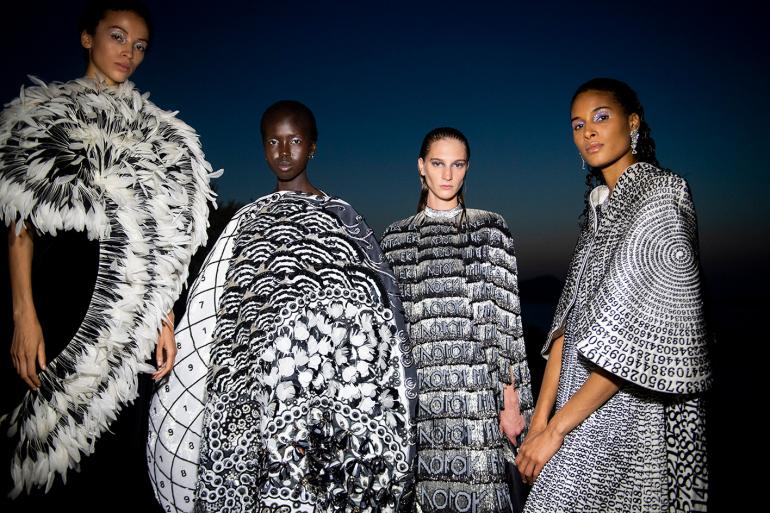 In the course of her creative process, Katrantzou discovered that Sotirios Voulgaris, the founder of Bulgari, was born in the Epirus region of Greece before settling in Rome. As an acknowledgement to this, their high jewellery and heritage collections were showcased, featuring new pieces embellished with details of ancient Greek coins and paying homage to the house’s Monete collection.

Being schooled in Hellenic history, Katrantzou explained that ¨during Athen’s Golden Age, Plato’s philosophical tenets took the form of written dialogues or speeches, theatrical performances played out over the course of eight hours and the unknown architect behind The Temple of Poseidon defined classical architecture using the Doric order.¨ The show payed an impeccable adulation to the marriage of ancient culture and remarkable craftsmanship – leaving spectators wondering if they had finally arrived at the Elysian Fields. 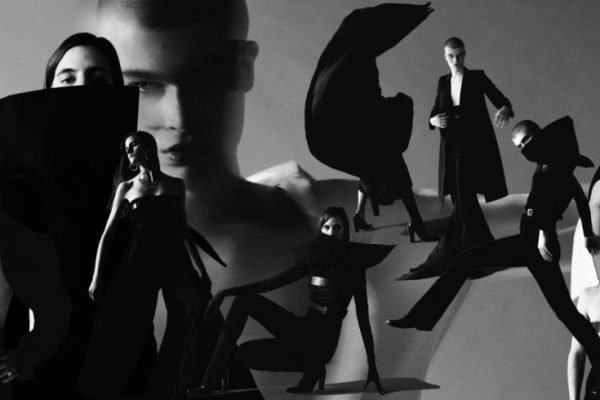