Right now, if there’s one thing the world needs, it’s amusement and comfort – even if it’s restricted to your daily lockdown look. Perhaps with this notion in mind, Alexis Mabille endeavoured to fulfil a collection that was plentiful in cinematic influences which married more accommodating silhouettes with striking colours. Contrasts such as chartreuse and a coq-de-roche coral appeared like they could have been snatched from the history pages of the Second Empire. With a clash of such titans, there comes no surprise that Mabille bestowed the name ‘Voluptas’ upon her latest spring / summer ’21 Haute Couture collection, in homage to the daughter of the gods Eros and Psyche. 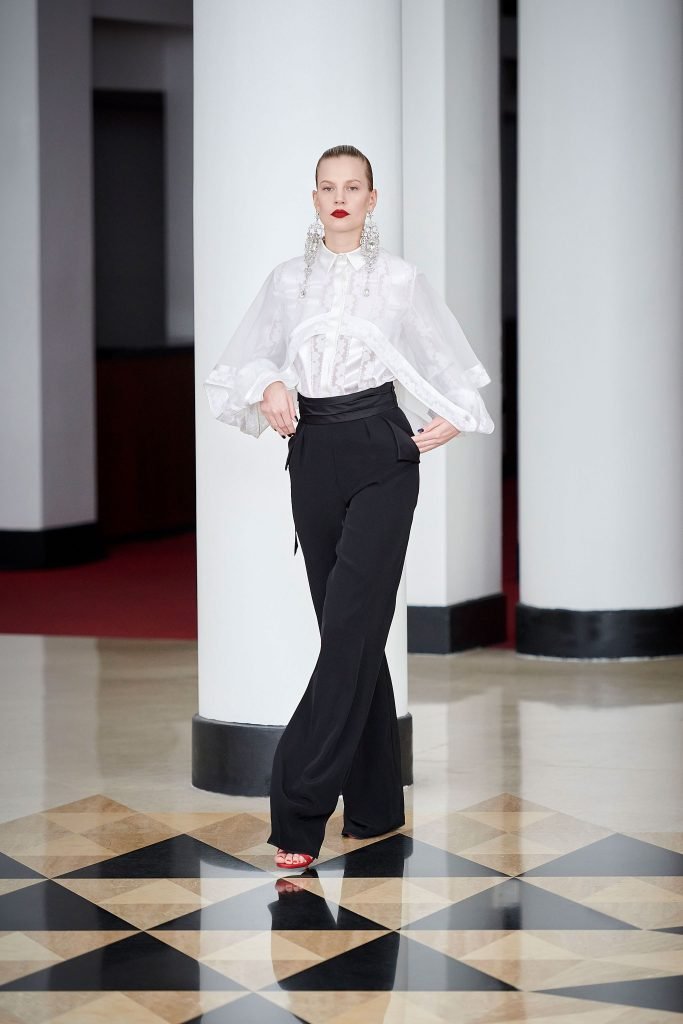 A dramatic remake of the ‘Le Smoking’ aesthetic saw the designer transpose a chiffon and satin white scarf blouse over elegant black crepe trousers. Then, there was the classical long black dress which somewhat broke protocol thanks to its stylised heart neckline – a detail which the designer justified as “flou, and at the same time built for a powerful woman.” The surprise appearance of some Second Empire theatre-land razzle dazzle was also in attendance through the form of an elongated midnight blue sheath, which was delicately embroidered in three shades of gold, to intensify the impression of exaggerated reliefs within its Arabesque details.

‘Mabille has an enduring interest with American costume designer Adrian – so there was no surprise to see several negligée inspired pieces such as a full length shirt dress in pleated gold lamé with feature mesh yoke and a golden princess crepe robe with exposed shoulders.’ – Charles Daniel McDonald

The collection featured memorable moments, such as a formal style skirt with batwing sleeve top in changeant grey taffeta and a curve skimming midnight blue jersey sequined trench. The notion of formality gave way to fantasy thanks to the mirage flower print skirt which was adorned with three layers of crystal flecked tulle in gradient shades to create a sublime, hazy watercolour effect aesthetic.

Mabille has an enduring interest with American costume designer Adrian – so there was no surprise to see several negligée inspired pieces such as a full length shirt dress in pleated gold lamé with a feature mesh yoke and a golden princess crepe robe with exposed shoulders. These looks were immediately reminiscent of the ‘Golden Age of Hollywood‘ and its protagonists such as Greta Garbo. 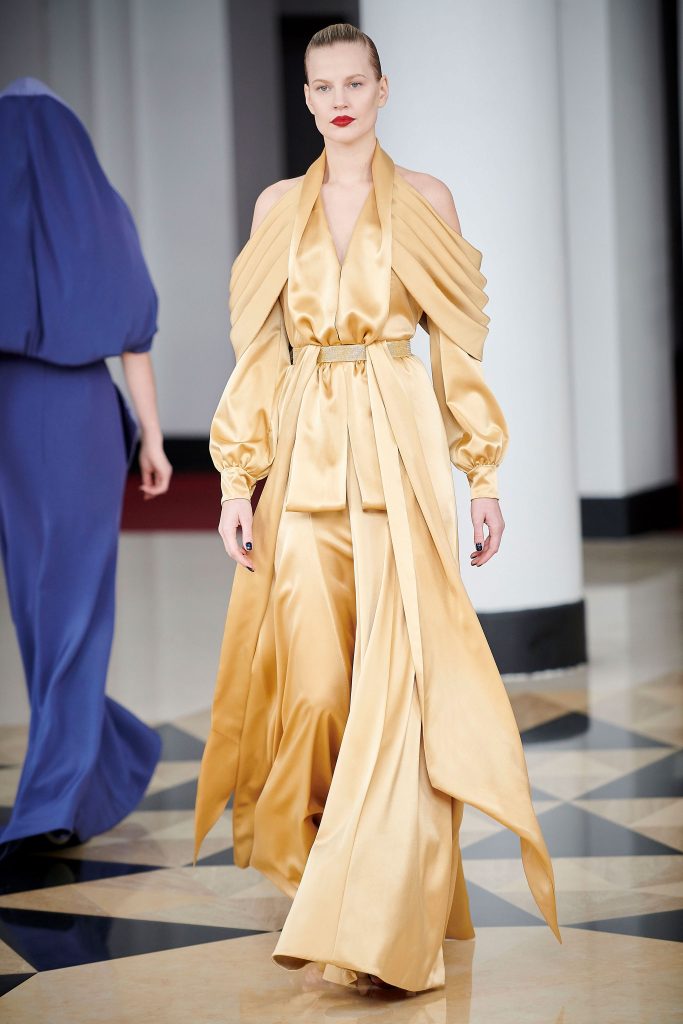 The Influence Of The Golden Era

Several of the dresses, such as the full length white nylon lace and gunmetal sequenced outfit appeared to have been assembled without seams – thanks to the application of the Cordonnet technique. The collection also featured a striking pearlescent fishnet bustier dress which was composed of a sport-luxe type technical material. Though many pieces could have appeared elementary in their look, they belie hundreds of hours of artisanal crafts to achieve harmony, but in the most natural Haute Couture like way.