ANTIONIO BANDERAS FROM FILM TO FASHION 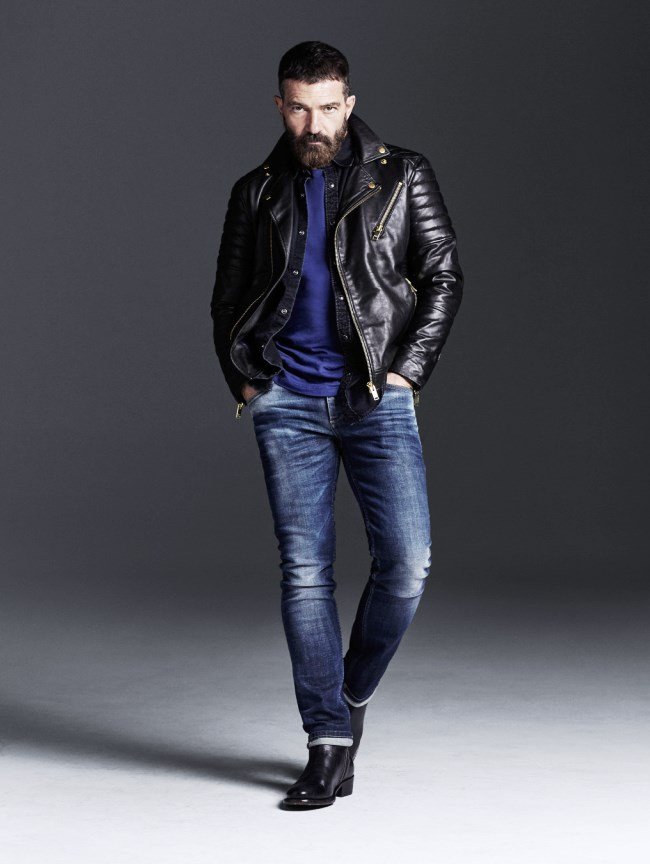 Prolific Spanish actor, model and film producer Antonio Banderas has recently been enjoying success in the studio, but this time it wasn´t the film kind, but the fashion type. The Malagueño screen idol has just completed a course in fashion design at London´s Central Saint Martins before going straight onto present his first mens collection with Scandinavian high-street label, Selected.

The Spanish screen star joined Selected´s head designer Daniel Struzinski to present the autumn/winter 2016 collection at a launch event in London´s Rosewood hotel, where the first of his two part collection was showcased to the public and international fashion press. 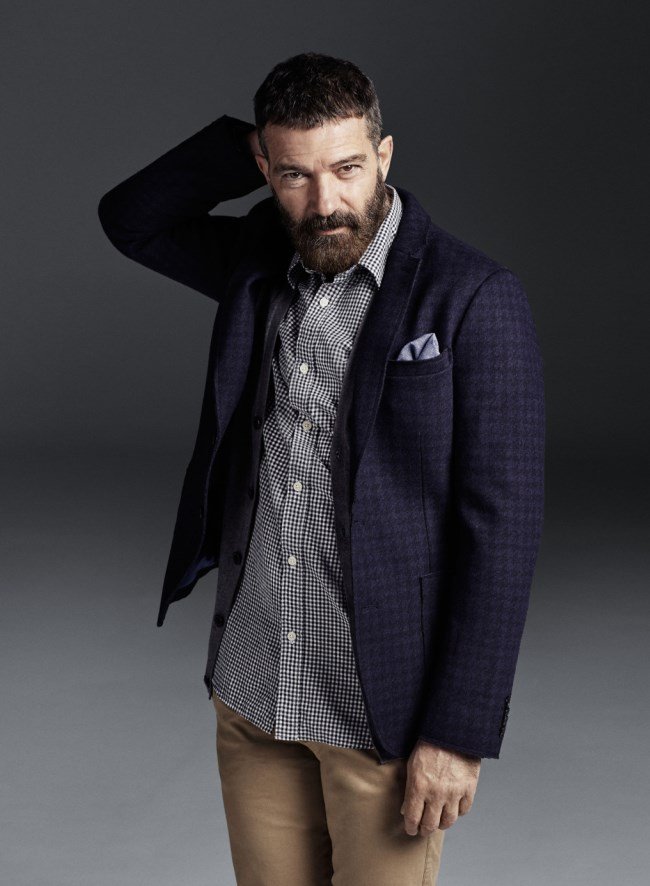 On the concept of Banderas, the collection is divided in three phases that reflect his life; heritage, indigo and identity. “In a way they are me and my way of life,” quoted the actor, who was kitted out in the signature biker jacket and ripped jeans from his collection. Clearly thrilled with his efforts, he spoke passionately about his venture with Selected and even took a little bow at the end of his presentation.

“In the morning, I wear jeans, something comfortable, sneakers, a T-shirt and maybe a leather jacket and I go out. If I have meetings, I want to go a little bit more elegant so I wear chinos, a blazer to have a meeting with the producer, or a cocktail. At night I have to go on the red carpet, so I’d like to use a tuxedo obviously or a black suit.” – Antonio Banderas

Head designer Daniel said the namesake collection was designed specifically to “catch Antonio in his element” and was intended to act as a lifestyle orientated collection for the everyday man. The collections full title is Antonio Banderas Design by Selected Homme and it is a comprehensive 30 piece range which features key wardrobe staples such as black motorcycle jackets, a leather bomber jacket, wool-blend blazers, overcoats, jeans, trousers, chinos, shirts, cashmere knit cardigans and last but not least a vest. The collection is also reasonably priced with amounts ranging from 18 pounds for a T-shirt up to 330 pounds for the black biker jacket. The collection will be available to buy on their official website at Selected.com as well as affiliate retailers from August. 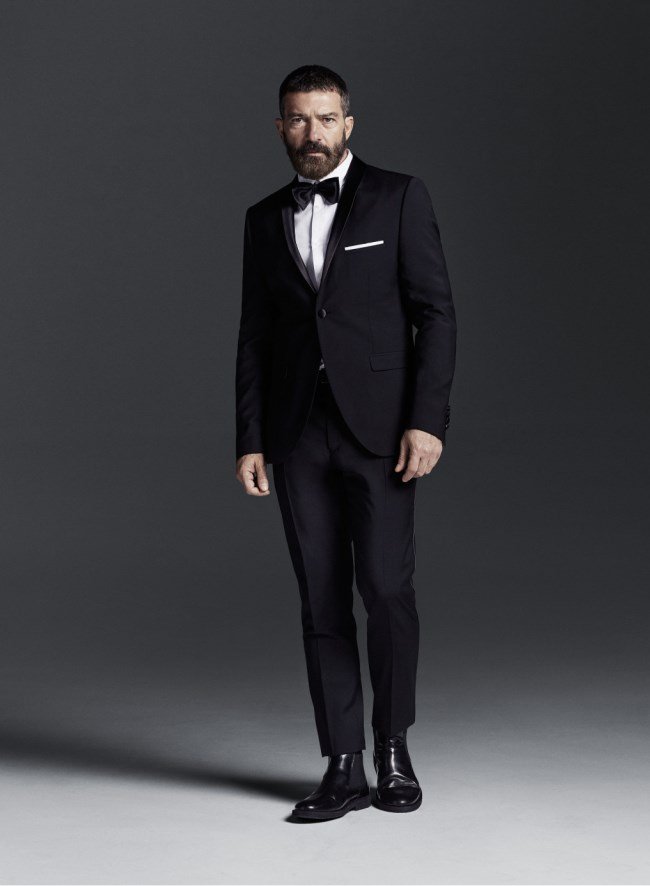 The signature shade of Banderas collection pays homage to his native Spain. Ocean blue is worked into the linings of jackets and outerwear and even the traditional collars of the polo shirts are given a coastal European edge with a reworked, collarless version (which we hear is one of his favourite pieces). For prints, Antonio took inspiration from his name and created a small flag motif to fulfil his desire for a “simple logo that wasn’t flamboyant.” Taking inspiration also from 80´s Versace, the actor went onto provide embellished gold metal details into his biker jacket.

“Probably one of the happiest times of my life was the Eighties, and I remember Versace putting gold with leather. I had this in mind, so we wanted to add the gold colour, it’s those little details. I love motorcycles, I ride motorcycles, so we wanted to have a jacket that I can use and people with bikes can use for that purpose.” – Antonio Banderas

Intentional of the fact that he didn´t have the necessary skills to create a first line collection straight away (and didn´t want a brand to use his name for the sake of it), he signed up to the degree course at London´s Central Saint Martin’s college so he could appreciate the learning process of fashion and”design from an honest point of view,” from his current base in Surrey, where he’s recently purchased a home. 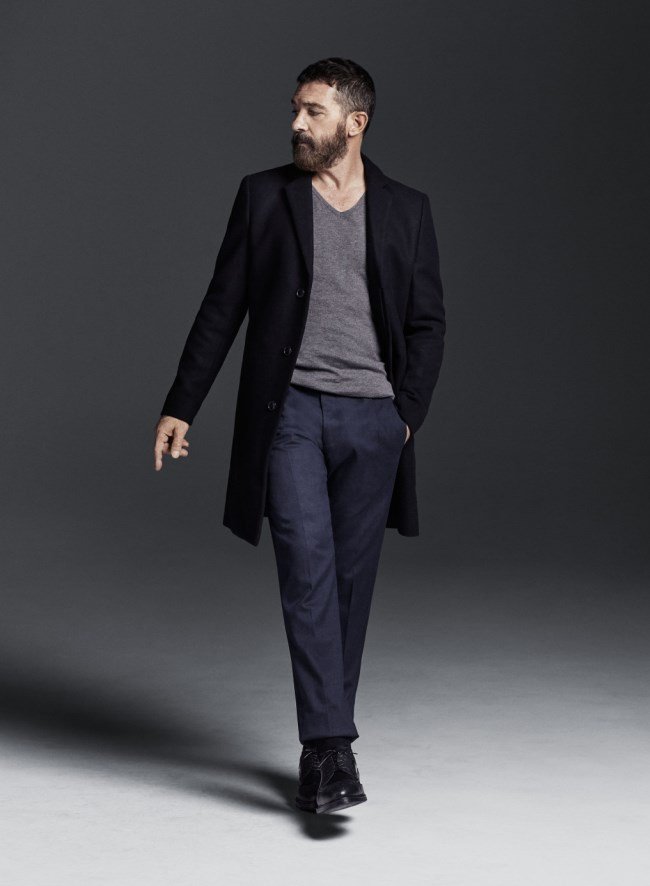 Not phased by the task in hand, Antonio’s solution was to stay focused but deferential. “The best thing that you can do is to stay humble first and study. I’m 55 years old. So to step in to a university like this you have to convince the professors that you are serious with what you want to do. I don’t know how I did it, but they got convinced. So I’ve been attending university in a very special way. I can’t go like every other person, and just go for the three years of studies. I have to extend that to probably four or five years because I have to attend to my professional turf. I just finished a movie in Italy, I’m going to do another movie in Chile, so I continue to move in my professional world. But I want to explore this universe, so what we do is capsules of very intensive work for four or five weeks that we insert when I have free time.”

Last August, Banderas started on his fashion journey by taking a short course in bespoke tailoring at Central Saint Martin’s where he worked alongside the British designer Daniel Fletcher, who though that Antonio was “a really lovely guy, and everyone got along really well.” In addition to this, Antonio was noted for working hard to develop his eye for detail and passion for knowledge, Fletcher noted that “he did everything, so it’s not like he came along and expected people to do things for him. I’d go and ask if he needed help, and he was like “No, no!” He did everything himself ” he commented, adding that Central Saint Martin’s has since asked him to return to work alongside Banderas and give him some additional guidance as his collection grows in size, complexity and probably popularity.