Madrid´s palatial Thyssen-Bornemisza museum is currently playing host to the internationally renowned exhibition entitled ´Balenciaga and Spanish Painting.´ The concept of the exhibition was to give yet more credence to the creative superiority of the great couturier’s work, whist enhancing the juxtaposition of the myriad of client commission works that are currently displayed within the museum.

The curator of the collection, Eloy Martinez de la Pera has a proven track record of bringing unique presentations to the museum; securing fine works of art from like minded establishments such as the Prado and Museum of Fine Art Bilbao. A persuasive tongue also managed to glean gems from private collections, other museums and the families of noble Spanish clients. Since Balenciaga’s passing in 1972, a legend has been reinforced about his uncompromising demands for quality. This has meant that the custodians of his creations have of late, been somewhat wary to let their precious creative jewels out of their sight – so the amassing of the collection is somewhat of a coup. 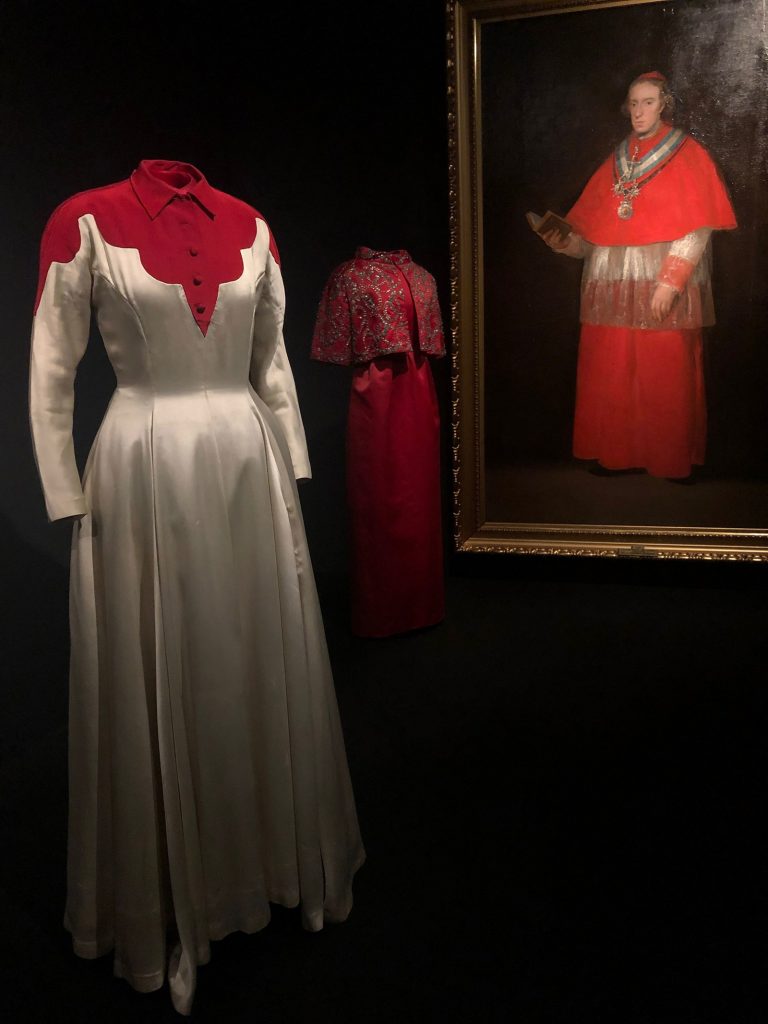 The Influence Of Art On Fashion

Balenciaga was born in 1892 in the small fishing village of Getaria, located on the Basque coastal area. The somnolent village contained small terraced houses in which the typical family lived on the lower floors. Balenciaga’s mother worked as a seamstress for the affluent Marchioness of Casa Torres; who was well connected and enjoyed dressing in the finest Parisienne fashions. At this time, the young Balenciaga was full of admiration for the style of the Marchioness and told would tell her on a regular basis. He commented that he could make equally fine garments, so she provided him with the necessary fabrics. One week later, she received a garment so glorious, she felt compelled to wear it to mass.

¨The subsequent fondness for his work led the Marchioness to encourage Balenciaga to work as an apprentice for a English style tailor in San Sebastian. This helped both cement his reputation and give financial aid to his family after the death of his father. The location of this tailor also had the benefit of being within the circle of the Spanish Royal Family, where introductions were sought to add to his increasing notoriety, finding himself increasingly in demand with many visits to the nearby Palacio Aldamar.¨ – Eloy Martinez De La Pera

Balenciaga found himself increasingly exposed to fine art and culture. This is also reflected in the exhibition with the Thyssen-Bornemisza having collated some of the finest paintings that once graced the walls of the Casa Torres before having been subsequently donated to the Prado later on. It seems only fitting that these pictures should be displayed within the first room of the exhibition, forming a ´royal guard prequel´ to the main event. Such pictures as Velazquez’s Apostles Head, Goya’s Cardinal Luis Maria de Borbon y Vallabriga and Murillo’s The Immaculate Conception appear in all their glory within this space. 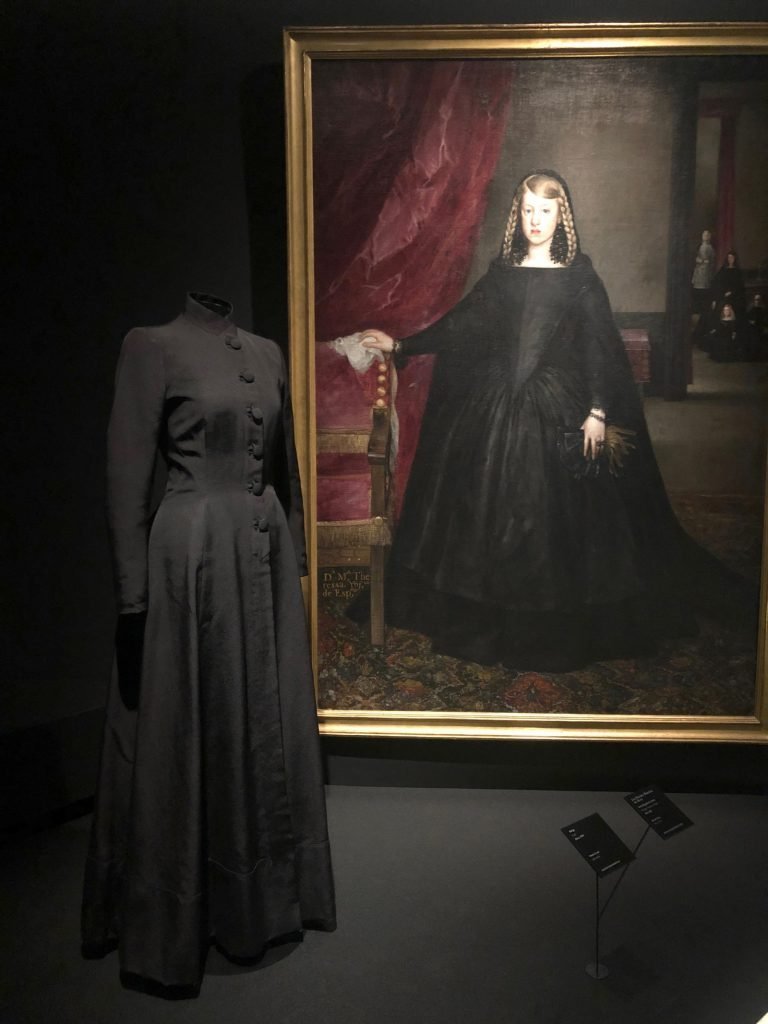 Balenciaga – ´The Master Of Us All´

Balenciaga sought refuge from the Spanish civil war and re-established his couture business in Paris, a city whose fashionable inhabitants had all been aware of his genius. On many occasions before, it was said that he had bought, copied and adapted such Parisienne styles for his own Spanish clients. Famously referred to by Christian Dior as “the master of us all”, established designers swooned to court him and at the time Vogue fashion editor Diana Vreeland claimed that Balenciaga “brought the style of Spain into the lives of everyone who wore his designs.”

Possibly one of the reasons Balenciaga created such a powerful sense of admiration with other designers is the truth to his heritage – the uninitiated his loyalty to country is reflected in the Spanish influence throughout his work. What is now seen somewhat unfairly as ´package holiday clichés´, Balenciaga used bold, vibrant colours, images of Flamenco Dancers, fisherman and bull rings to adorn his cutting edge designs. Loose fitting blouses, full skirts and ball gowns all reflected the power of the Spanish influence that was eagerly copied across to other fashion centres in Europe as designers saw no shame in imaging and applying their own cultural enviroments.

Perhaps the greatest accolade to be paid was from famous fashion portrait and war photographer Cecil Beaton, who referred to Balenciaga as ¨he is fashions Picasso; dour, Spanish and acetic. His touch has the rugged peasant-like sureness of great artists.¨ For this reason, clients had still been religiously visiting his atelier in their flocks up to the late 1960’s. This flurry of twilight age work is reflected in his crinolined and bustier ball gowns and a wedding gown which was proudly designed for the controversial General Franco’s eldest grand daughter and features as a key part of the exhibition. 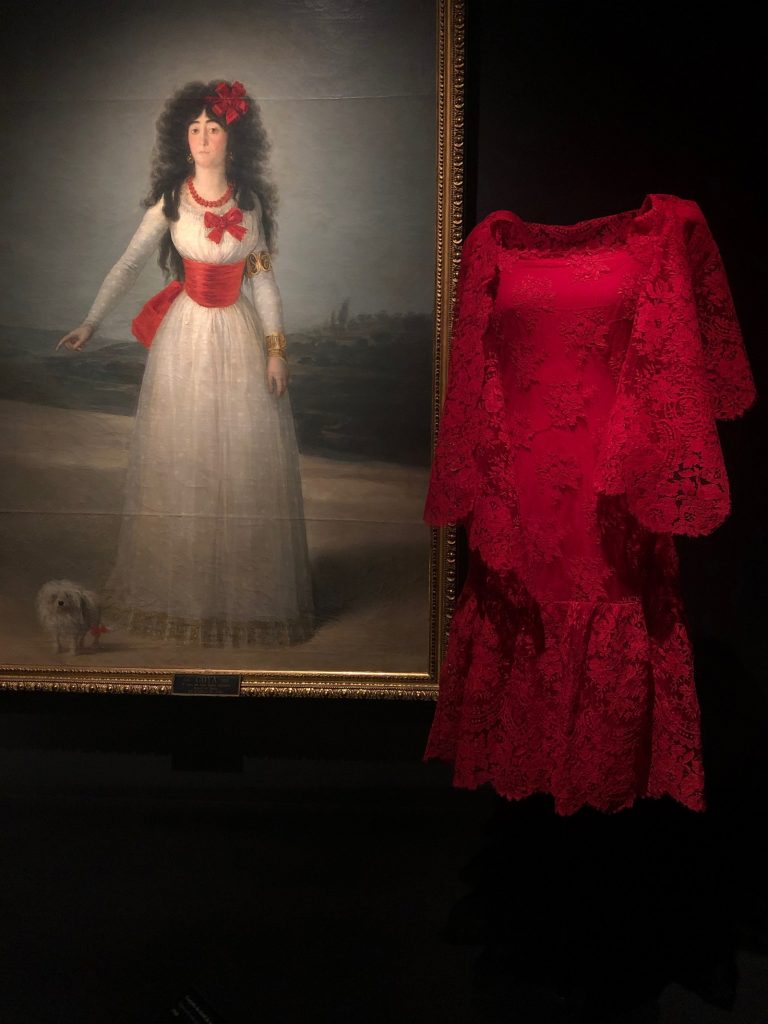 The dark walls of the display rooms serve only to enhance the majesty of their contents, where crimson velvet creations jostle with brown and ivory drop waist evening gowns. The clever placement of  a Toreador bolero sits comfortably next to Carbo’s magnificent painting of a 1915 Julia wearing a very similar garment. It’s also worth looking out for the exhibition catalogue which will no doubt rapidly become a collectors item in the years to come – thanks to its high quality pages and striking photography by Barcelona´s Jon Cazenave.

´Balenciaga and Spanish Painting ´ is a rare and unique exhibition which is intended to grace a rare and unique museum. Its fusion of cloth and oils by some of the finest artists that spanned the centuries sit impeccably alongside groundbreaking pieces of couture which were visualised and worn by the great and the good of a bygone era. Such a marriage of  alternative yet highly desirable collection pieces may never be seen again within a public collection.