When foreign visitors take a guided tour of the Château de Chenonceau, one of the jewels of France’s Loire Valley, they are often intrigued by the interlocking Cs that appear throughout the castle. The initials are those of Catherine de’ Medici, the former queen of France whose portrait hangs above an elaborate carved stone chimney bookended by lions. But to 21st-century eyes, they look remarkably similar to the Chanel logo.

Also known as the Ladies’ Château, Chenonceau has a history marked by a succession of powerful women, of which the Renaissance rulers, in particular, inspired the label’s founder, Gabrielle “Coco” Chanel. That the French fashion house chose to stage its Métiers d’Art collection there is therefore something of a full-circle moment. Are destination shows back? If you ask Chanel, which took out the Château de Chenonceau for this year’s Métiers d’art show, the answer is a resounding yes. In the Loire Valley, Virginie Viard paid homage to the powerful women who have inhabited the castle since the Renaissance.

The show took place in the Château de Chenonceau 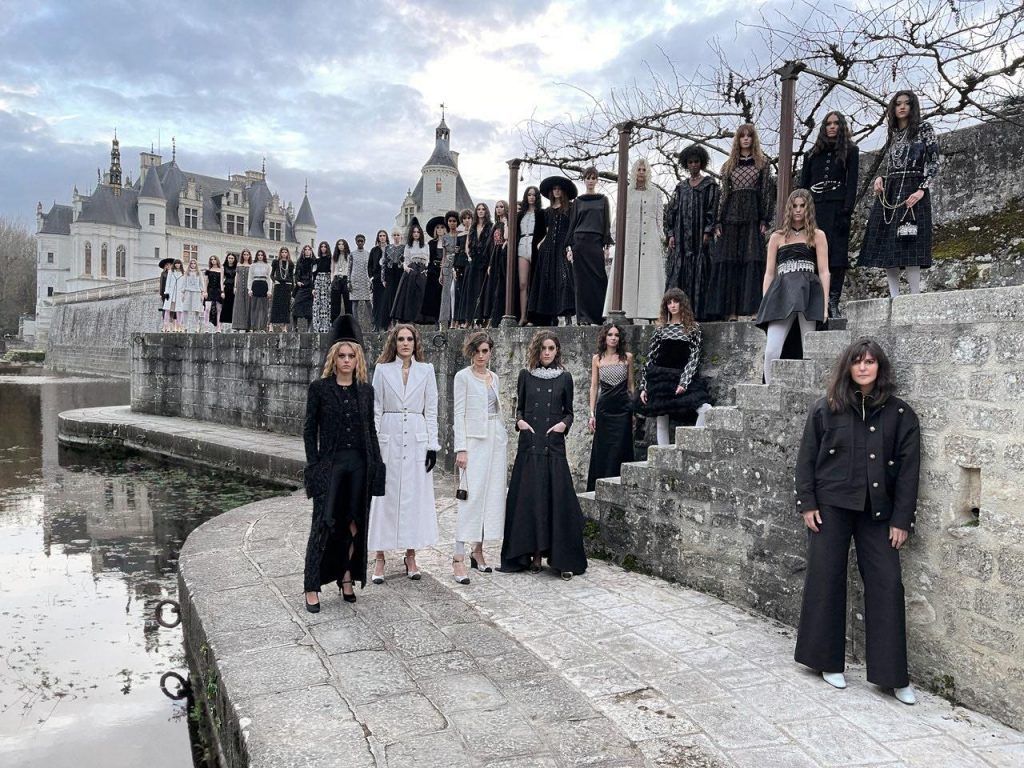 If the recent season of The Crown made you wonder how you’d fare when put to the “Balmoral Test”, imagine how you’d dress for Château de Chenonceau. It was the challenge Virginie Viard set herself for this year’s Métiers d’art collection, which also marked Chanel’s return to destination shows after a series of Paris presentations. Staged without an audience – save for Kristen Stewart, who had the whole place to herself – models were captured on film wafting down the bridge gallery of the medieval bastion in the Loire Valley like the ladies of a noble court, floating through time and space. “It’s between the past of Chanel, and today, and tomorrow, through Virginie’s vision,” Bruno Pavlovsky, the president of fashion at Chanel, said on video call. 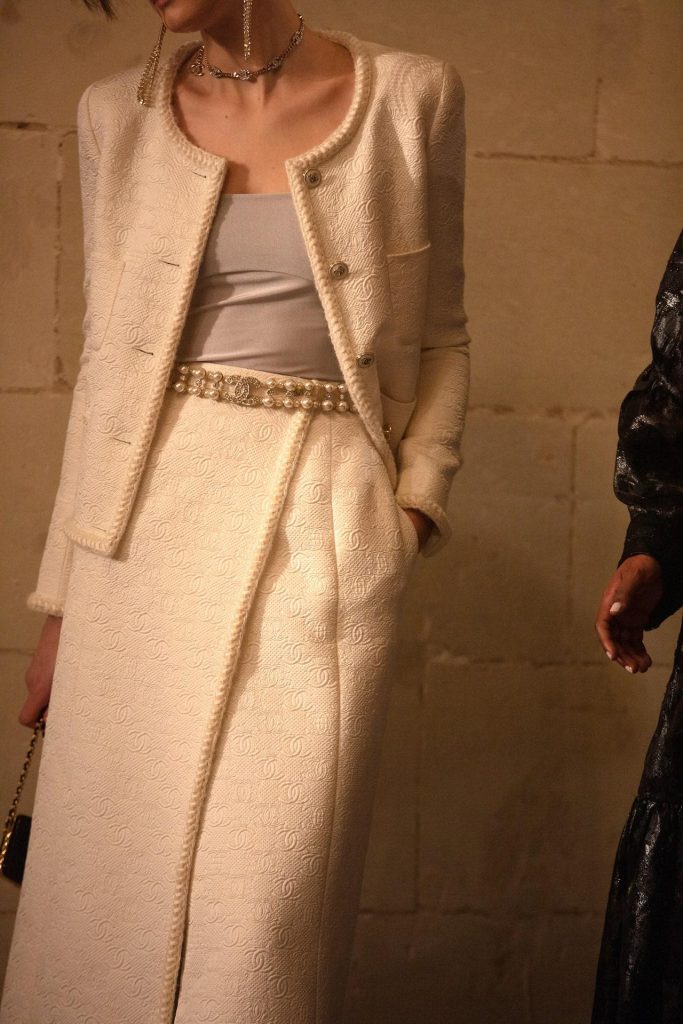 The Influence Of Nobility

There was a certain – no doubt intentional – irony to the choice of location. Following a year spent confined to our personal spaces, a castle signifies the ultimate upgrade when “working from home”. It’s a reality that has spawned the marketing trend of “comfort-wear”: the idea that we innately dress down and more comfortably when we don’t have to be seen in public. That notion wouldn’t have flown in the day of Catherine de’ Medici and Diane de Poitiers, two of many powerful and politically ambitious women who inhabited Château de Chenonceau since it was erected in 1522. Known as the Château des Dames – the Ladies’ Castle – this made it the perfect setting for ViCoco ard’s new female-led era of Chanel, which – by the way – shows no intention of dressing down. “She is a woman designing for women. We see that in the collections, and we see that in the boutiques with our customers. There is something very special there that only a woman can give a woman,” Pavlovsky said.

The collection featured indirect nods to the Renaissance 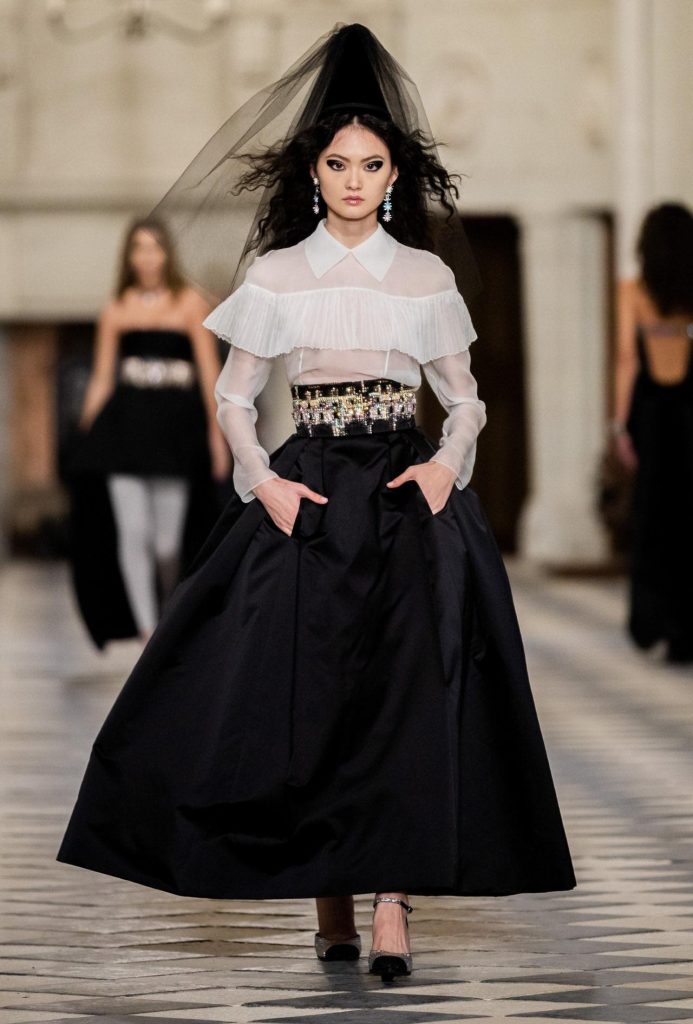 Influence Of The Renaissance Era

In an article from 1936, Coco Chanel wrote about her affinity for Renaissance women. “I have always been struck by a strange feeling of sympathy and admiration towards the women who lived from François Ier to Louis XIII, perhaps because I find them all to be great, with a magnificent simplicity and a majesty imbued with onerous duties.” It would have been easy for Viard to go all in on the reference, but nearly two years into the job, it’s clear that she doesn’t approach a theme as directly as her teacher, Karl Lagerfeld, sometimes did. Rather, her Métiers d’art collection paid gentle nods to the Renaissance wardrobe and brought it into the present. Cut into her silhouette was the memory of the era’s rigorous edges, strapless shoulders, floor-length skirts, bell sleeves, and ruffled gloves. She paid homage to some of the trademarks of the era in a veiled cone hat, latticework on dresses, a leather jacket quilted with pearls, and knitwear that resembled the chainmail of armour. Those pieces – painstakingly constructed – were a treat for the artisans to whom the Métiers d’art line is devoted.

It was an optimistic look to the future 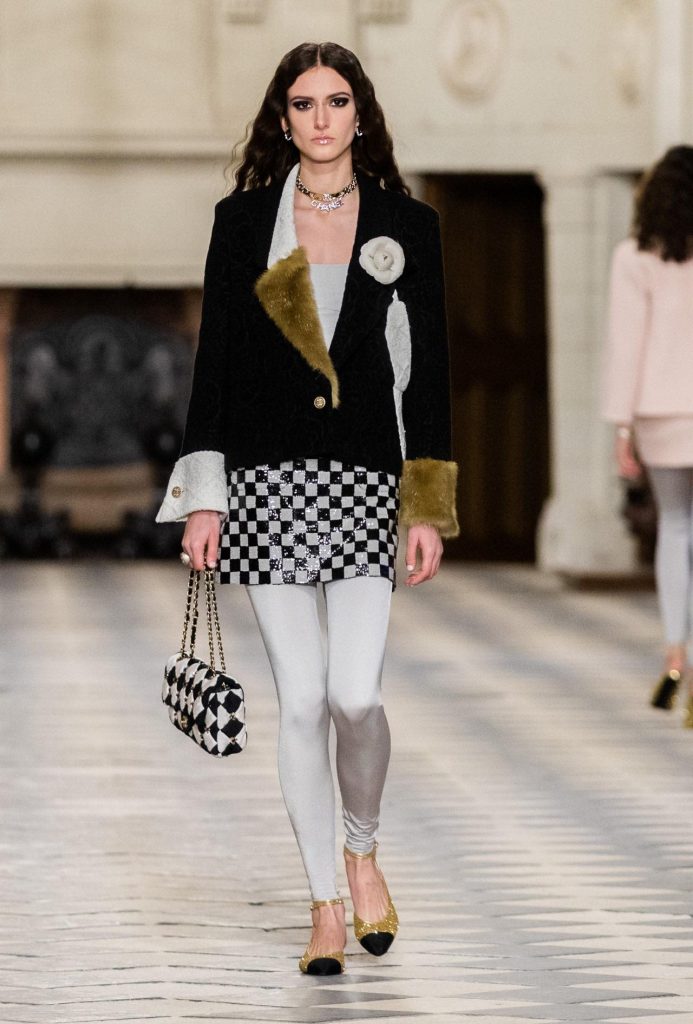 “It is a castle on a human scale. And Catherine de’ Medici’s emblem was a monogram composed of two intertwined Cs, just like that of Chanel,” Viard said, noting the similarities between the fashions of the Renaissance and Coco Chanel’s lace ruffs, as well as the spirit of her jewellery. “Deep down, this place is a part of Chanel’s history,” she said. For all its parallels to history, the show was geared towards the forward-thinking and optimistic, matching the global zeitgeist that’s manifested this December as Covid-19 vaccines are rolled out, a better-behaved president is about to enter the White House, and a brighter future is on the horizon. Viard channelled that outlook in kicky chequered miniskirts (a nod to the chateau’s floors) that felt ever so rock ‘n’ roll next to the designer’s 1980s shoulders and shiny leggings.

The show signified a return to destination shows 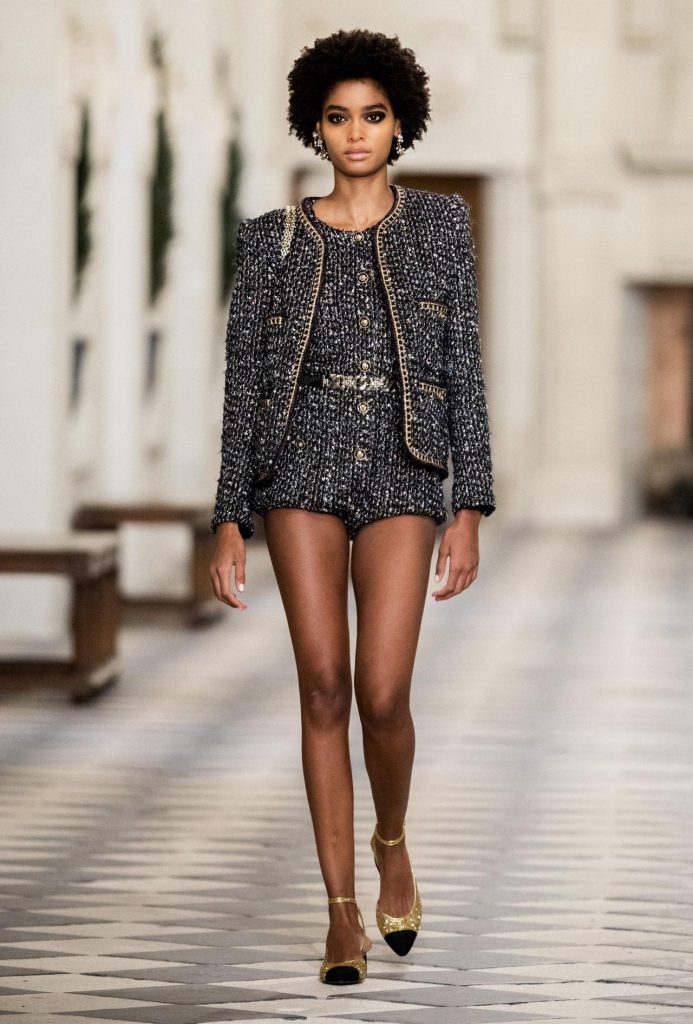 “We could have had a large number of guests in the Château de Chenonceau,” Pavlovsky said, referring to Chanel’s initial plans for the show. “That was the first objective: to come back to the experience and the emotion of these shows. We have no choice this time so we’ll do it differently. We can do many things now, but they will never replace that emotion.” They did a pretty excellent job on plan B: on the morning of the show, guests received a book with photographs of Chenonceau by Juergen Teller, a printed essay on Chanel and the castle by scholar Fanny Arama, and a booklet with preview shots from the collection. Since the early days of the pandemic, Chanel has been resolute in its intentions to keep staging its six annual runway shows.

This show heralded the return of the destination experiences we’ve known from previous Métiers d’art and Cruise collections: “I can confirm that we will return to travelling,” Pavlovsky said. “It’s part of the Chanel DNA to be able to go where it makes sense for the brand to be. It’s the vision of the brand, it’s the vision of Virginie, and I think it’s quite good to be inspired by the world we live in.”