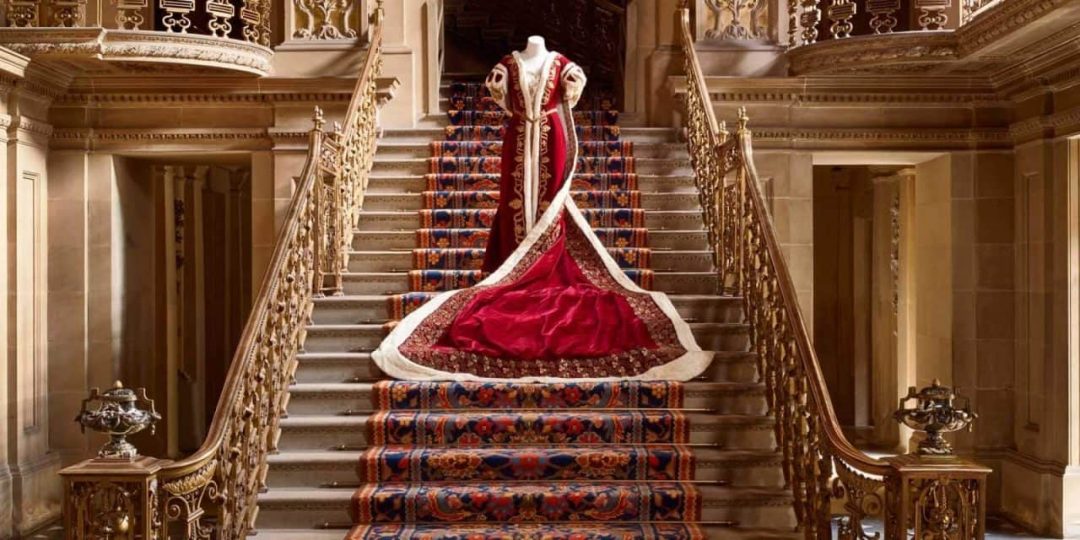 Now is the right time to witness a richly decorated snapshot of British aristocratic fashion. Acting as host and omniscient narrator, the majestic Chatsworth House, sits nestled within Derbyshire´s Peak District and effectuates as the formal residence to the Duke and Duchess of Devonshire. The houses opulent surroundings recently shot to fame thanks to its feature within the film adaptation of Jane Austen´s Pride and Prejudice. The current fashion exhibition, entitled ‘House Style: Five Centuries Of Fashion At Chatsworth’ features a series of rooms brimming with stylish exhibits and memoirs, where you can expect to see everything from wedding gowns, Coronation robes and tiaras along with whimsical examples of 19th century fancy dress outfits that compliment and chart the homes 500 year history since it became occupied by the Cavendish Family way back in 1549.

Over the centuries, practically all of the great and good have at some point marched through Chatsworth´s magnificent corridors – thanks to seasonal one-off balls having been held all throughout its noble history. In 1897, the then  8th Duke of Devonshire hosted a occasion that became known in aristocratic circles as ‘The Party Of The Century’  and one of the highlights of this exhibition is that six of the actual dresses worn by the guests-of-the-moment at that time are fantastically flaunted within the galleries imposing facades. Back in the day, Chatsworth was one property that knew how to throw a party, with many famous socialites from across the world cutting a dandy trail across its marble clad ballroom. Everyone from the Mitford sisters and even Fred Astaire’s dancing partner and sister Adele Astaire were known to have made a sharp aristocratic waltz across the main drawing room.

¨ In House Style we hope to bring these compelling and fascinating people and the very different worlds they inhabited to life, through the clothes and the jewels that they wore ” – Hamish Bowles

Thanks to its pedigree and history, Chatsworth was always a fashion magnet for those in the know and in the circle. The 5th Duchess of Devonshire, Georgina Cavandish, became a leading style icon and inspiration in her day  thanks to her passion for more fashion-forward and Avant Garde accessories, which she vehemently wore to be ´ahead of her time´. However, her overtly stylish lifestyle was literally without a price and as a result, she suffered crippling debts with ill heath taking its toll in her later years.

The idea for the exhibition came about by happenstance several years ago. Lady Burlington (who is married to the next Cavendish in-line) was searching around the many store rooms for suitable fabrics to make a christening gown for her son. Overwhelmed by the sheer amount and quality of clothing that had been amassed, a call was made to the infamous curator and Editor at Large for American Vogue Magazine, Hamish Bowles, who directly received an invitation to inspect the Herculean amount that had been amassed within the building; upon which discovering, he then suggested that same experience should be available to be enjoyed by the general public and patrons alike.

Bowles then went onto carefully curate the exhibition in tandem with Creative Directors Patrick Kinmonth and Antonio Monfreda, the brains behind such successes as the Mario Testino Princess Diana photographic exhibition of 2005 and the outlandish Metropolitan Museum ‘s 2004 ‘Dangerous Liaisons: Fashion and Furniture in the 18th Century’ offerings.

House Style has over 100 items of special interest on display. From the gown worn at the Coronation of George VI and Queen Elizabeth right through to shoes and jewellery, straight from the families deepest vintage vaults. There is no great surprise that Gucci is also involved in the sponsorship of this event, in the form of a beautifully crafted video that is filmed in and around Chatsworth House and its grounds, starring none other than Vanessa Redgrave.

In addition to the archives, Gucci also has two dresses on show which were exclusively designed by current Creative Director Alessandro Michele for the exhibition. The most breathtaking aspect of the retrospective has to be the 30 evening gowns which were designed by some of the leading international lights in the history of Haute Couture -expect to see names such as Balmain, Chanel, Dior and Westwood amongst its bounty. Thanks to a vast collection and imaginative curation, Chatsworth´s apparelistic heritage is now as rich as its architectural one, so be prepared to come here with great expectations.