What happens when you take four distinguishing women, one ancient castle and a world of foreboding mystic forces which are let loose within? Well, instead of the synopsis for a classic horror movie, it would transpire that you will end up with the autumn/winter collection from French couturier, Paco Rabanne; which is showcased in the style of a short film, under the direction of Julien Dossena.

Indulging his passion for French fantasy films, Dossena sets the mood for Rabanne´s lastest collection by affording us an ¨eerily sensuous romp around a mysterious yet immaculately decorated mansion, set within the new wave era¨. In no particular order, his juxtaposing inspirations ranged from Baroque, countryside, cowboys, dance, dandies, grunge, the grittiness of acid jazz and the tenderness of friendship. It comes as no surprise to see that the coven of inquisitive women act as the protagonists throughout the film; encompassing the essence of the Paco Rabanne women, who emulates the glamour-meets-bourgeois Parisian codes of the brand. 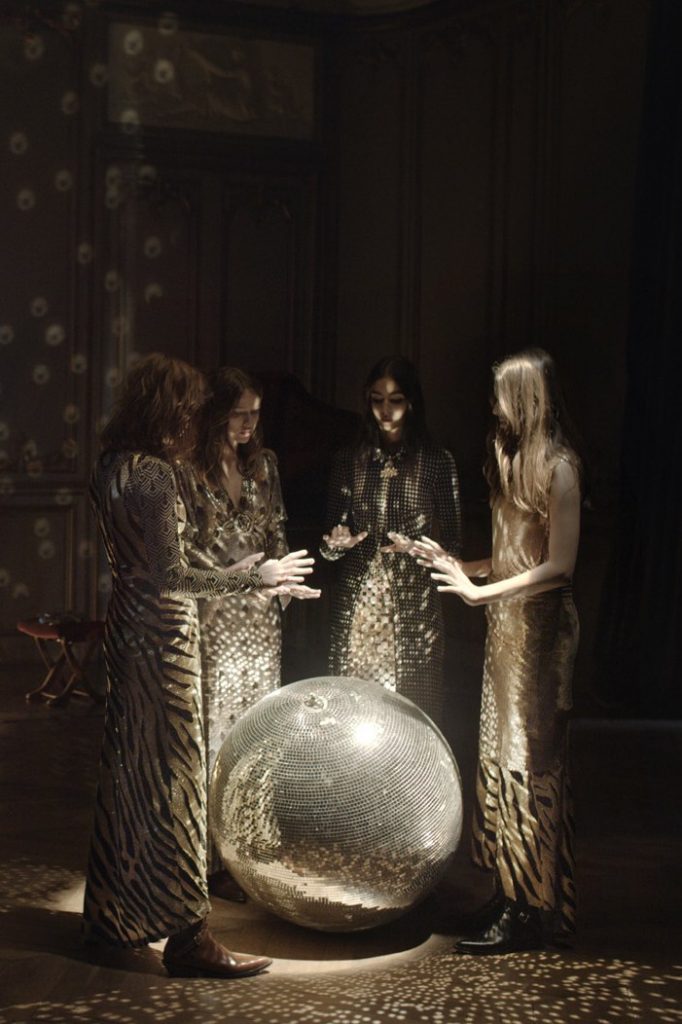 “I imagine multiple situations and incarnations from these references,” Dossena explains of how he envisaged the two-minute film and his attitude to holistic contemporary fashion design. “It is both quite abstract and practical at the same time.” The directors creative team, for the short film, titled ´The Apparition´; was written and directed by Raphael Gianelli-Meriano with a supporting talent base cast featuring Fishbach, Christa Théret, Nilaya Bal and Nora Attal. “We wanted to talk about the feeling of sisterhood. The power of womanhood is strong and mysterious, eternal as well, and mystic in that sense.”

Within the transmission, light quickly turns to dark (thanks to the skills of cinematographer Martin de Chabaneix), leaving plenty of scope for outfit changes (stylist Marie-Amélie Sauvé) within the “time loop”. The most bewitching visuals of evening looks comes at the film’s climax as the women “gather around the light” – a cleverly placed disco ball that scatters Paco Rabanne’s signature metal palettes across the mesh dresses, just in time for a “nightly ritual”. “I could live here for eternity” is the narrator’s closing statement, and it’s not difficult to imagine floating around a Gothic estate in glistening chain-mail.

Whilst never having experienced an arcane force, Dossena still believes “people can sometimes be transcended by mystic belief”. When it comes to the founder of the namesake brand, however, he has no hesitations. “Paco Rabanne himself is a mystic esoteric writer,” he testified that “the film is a wink to the founder.” But, will this seductive snapshot into Dossena’s world translate into an increase in trade? Well, only time will tell – but for the moment, his evocative imagery cuts through the somewhat predictable visuals that are saturating the ready to wear market.