Many psychologists claim that the most consuming human fear of all is seeing ones self, be it by surprise in a bathroom mirror or within the reflection of a dark window. Our existential dread is always lurking in the wings.

Within the new cinematic releases for Autumn, you can familiarise yourself with Jordan Peele’s Sophomore film, ´Us´, which plays upon the idea of our perfect body doubles – inhabiting some dark corner of the earth, and perhaps not so peacefully integrating alongside its other physical elements. For some 2000 years, the human race have established plenty of superstitions, with all of us as an all-encompassing race. Legend tells us that if we ever had the opportunity to see our Doppelgänger – we could either die, or at least go mad. Tradition and superstition takes this notion one step further, with common folklore habits such as covering up mirrors in a home to avoid unwanted energies being seen. The centuries old phrase ´know thyself´ wasn’t invented by a philosopher (although it was popularised by one). This was an inscription which was said to be placed at the entrance of the oracle at Delphi´s temple, as a potential warning about what we would learn inside.

To be haunted by oneself is such human a compulsion that we have stripped the others of the fear: Vampires don’t have reflections at all. – Charles Daniel McDonald 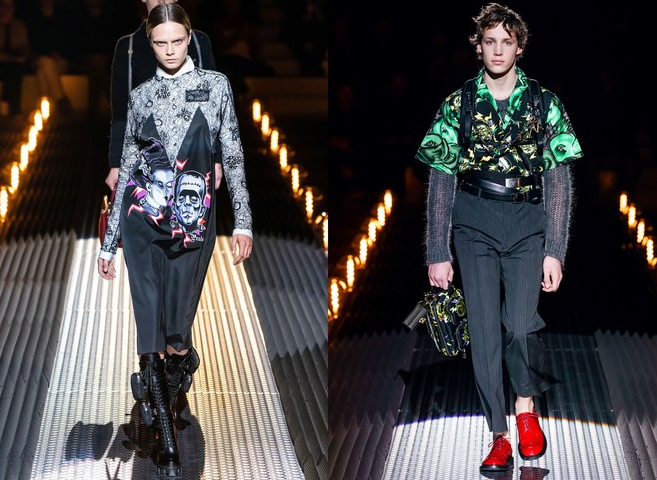 Jeanne Detallante’s illustrations of Frankenstein and his bride appeared in Prada’s womenswear and menswear collections for Fall/Winter 2019.

Essentially, attendance at a fashion show is to see nothing more than a fashionable and better looking version of yourself, a notion they call aspirationalism. To attend a full fashion month is to see these parades of potential ´you´, dozens of times a day. Attention and patience can be blurred leading to collections bleeding into each other – doubling up on models, silhouettes and ideas. Thanks to digital archiving and on-demand channels, attested collections are being revived with Frankensteinian ease. Past trends and loves being re-animated on the runways and brought back from the dead to appease the Millennials and Gen Z-ers and their hunger to be seen as grungy or glamorous. Let´s also not forget about the weekly scouting competitions which seek to pluck the next big face from obscurity to become ´the next Kate Moss or Naomi Campbell – serving up a variation of a theme and promising a edited doppelgänger of a recognised beauty. 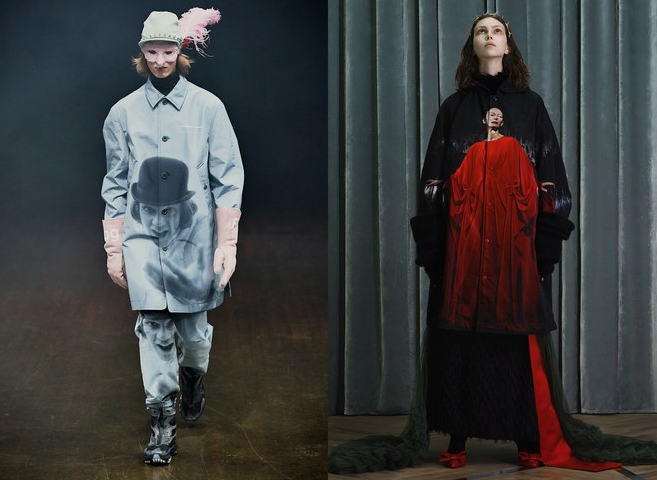 At Undercover, Jun Takahashi has made a habit of bringing scary movies to the runway. At left is his interpretation of A Clockwork Orange’s Alex DeLarge; at right, his take on Suspiria.

If this isn’t unearthly enough to make you think twice about your reflection and its aesthetic, there’s also the matter of the numerous trending references to fear, horror, and terror on this years Fall/Winter 2019 runways. At Balenciaga, models wore blood red contact lenses like cyborg contract killers. Demna Gvasalia’s own collection, Vetements, explored the frights of the dark web. Comme des Garçons’s Rei Kawakubo called her show “a gathering of shadows” and assembled her models in a ritualistic circle for the show’s close. Rick Owens asked the Instagram drag star Salvia to consult on an alien makeup look complete with black contact lenses that turned models’ eyes into infinity pools of ´inky nothingness.´ 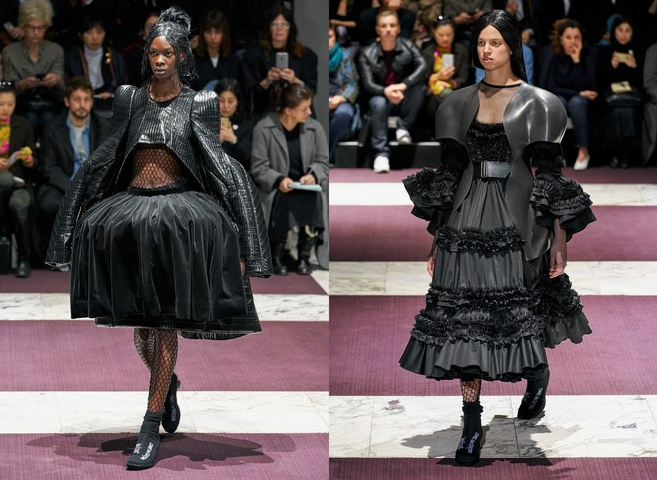 Comme des Garçons’s Fall 2019 show was called “a gathering of shadows,” touching on ideas of witchcraft and covens.

Even Miuccia Prada fell under the spell of horror stories, including Jeanne Detallante’s illustrations of Frankenstein and his bride, Elsa Lanchester, as a print in her most recent Fall/Winter 2019 men’s and women’s collections. After the menswear show in January, Prada explained that “mainly, I was interested in the understanding of humanity: weakness and the more delicate and naked aspects of humanity also. The rejected . . . the one who doesn’t have a career.” Mirroring her collections against the entourage of our current moment of social, political and military conflict. ¨Because fashion has to be light somehow, we borrowed the symbols of trashy horror movies; from Frankenstein to The Rocky Horror Picture Show and all those movies. Frankenstein is the ultimate example of the tormented monster with a big heart, who simply searches for love, misunderstood.” 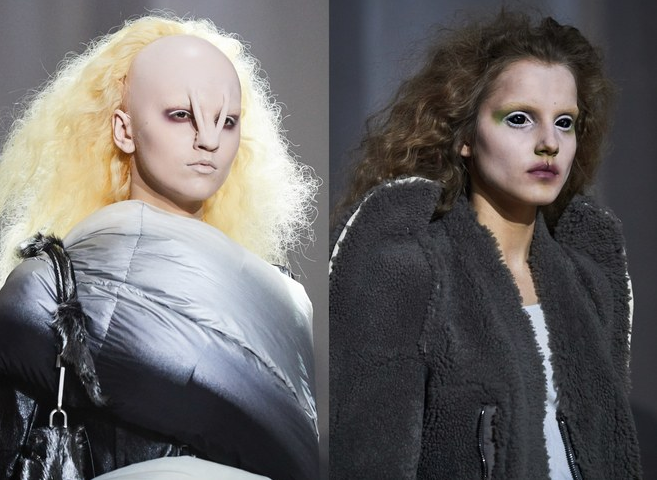 If Prada’s alternative love story is one of romantic redemption, then Jun Takahashi’s is one of sartorial shock. At Undercover, Takahashi has turned the women´s and men’s collections into morbose epics. His recent Fall/Winter 2019 menswear outing explored what life would be like if Edgar Allan Poe joined forces with A Clockwork Orange’s Alex DeLarge – a notion which is particuarly uncomfortable considering film’s portray of women and the female body. For his womenswear collection, he pulled inspiration from the 2018 Suspiria, Luca Guadignino’s remake of the Dario Argento original, which brought gothic gruesomeness to new extents. Tilda Swinton fulfills the character of Madame Blanc, the headmistress of horror at Berlin’s Tanz Dance Academy, in a flowing witchlike cloak. He´s also revisited terror inspired trips in the past with inspirations from 2001: A Space Odyssey’s Hal, The Shining’s Grady twins and other Kubrick-inspired inspirations. 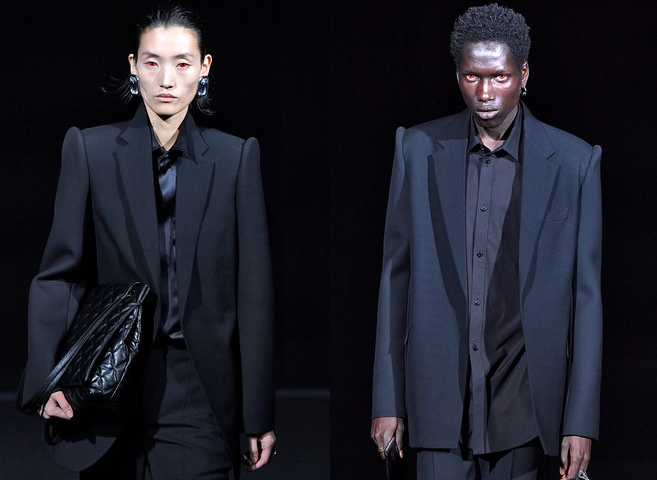 Why suddenly is all this sinister-scary style trending this season? Well, according to trend-prediction agencies such as WGSN, fashion is reacting to the ruckus of the times we live in, reflecting the Zeitgeist of the moment. But, is wearing your fear conquering it? Possibly not, as maybe there’s a more feminist notion concurrently at play. For centuries, women have been the protagonists and unwilling victims of nocturnal narratives, until Mary Shelley came about with a literal stake through the heart for the male saturated horror genre. Continuing on from this notion, this year’s most popular horror films have all attributed female heroines from box office hits such as Annihilation, Us and Hereditary. 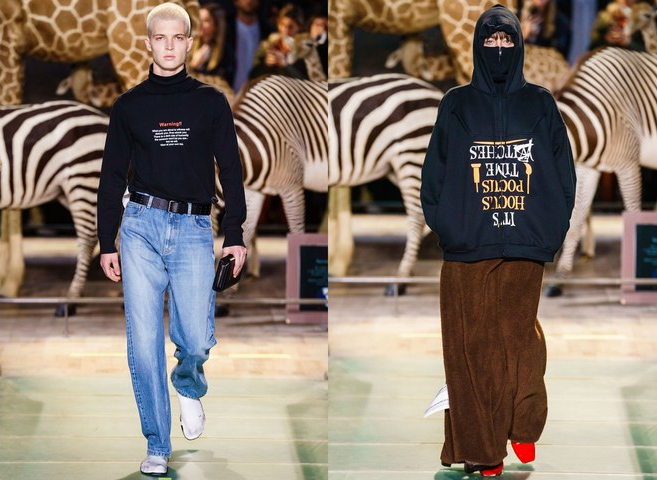 At Vetements, Demna Gvasalia explored the dark Web with shirts that read: “Warning! What you are about to witness will disturb you. Even shock you.”

So, is fashions obsession with horror down to the fact that it is an industry which constantly invites us to confront ourselves and our own existential dread? (A notion as to why Gigi Hadid was spotting reading Camus’s The Stranger, while her sister Bella is currently engrossed with Stephen King’s The Outsider.) For all of its ´of the moment´ and trendiness, fashion can often feel excused from time – or a champion for the disregard of it; constantly repeating and reanimating itself over and over again. It’s not an unfortunate quality – just like the people wearing the clothing, the fashion industry is constantly introspecting whether you care to note it or not. Know yourself and why you wear it.