Noted Mexican artist Frida Kahlo is the latest subject to be featured by Knightsbridge´s Victoria & Albert Museum this year, in a retrospective of her work entitled ‘Freda Kahlo: Making Herself Up.’ It’s been somewhat of a coup for London city as this is the first time any exhibition showcasing her most cherished possessions has been allowed outside of Mexico. The exhibition displays a broad range of the feminists personal possessions where a thoughtful selection of clothes, self-portraiture and photographs all help the casual observer and fan alike to gain a more personal and intimate  appreciation of the icon. Kahlo´s work first shone brightly when surrealist artist Andre’ Breton arranged for her very first exhibition at New York´s Julien Levy Gallery way back in 1938 and the rest, they say, is history.

With over 200 objects on display, many of which have been gleaned from both Mexico’s Museo Frida Kahlo and her home known as the ´La Casa Azul´ (which remained sealed until 2004 by her husband Diego Rivera following her untimely death in 1954). Such an array of intimate items give us a broader viewpoint of Kahlo not only as an artist and a cripple, but also as a woman. You can expectt to see personal letters, jewellery, garments  and necklaces that had been made by Kahlo herself and reflect the heritage of pre-Columbian Mexico, which was always a hallmark of her work. These exhibits, alongside decorative hand painted corsetry all add to the flavour of the artist and help to unravel the mythos of her art, which number just under 200 that were made over her short lifetime. 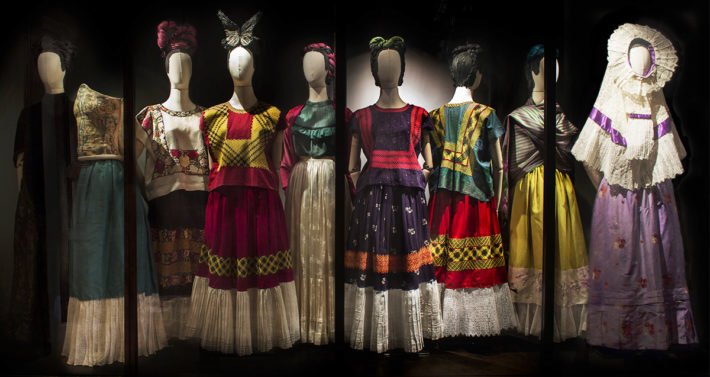 Frida´s Fashion As A Cultural Identity

These reflections of a life less ordinary are skillfully weaved with audio visual images of the artist and perhaps the most poignant exhibits are the various items of medical ephemera that highlighted across the long periods of illness following Kahlo´s serious bus crash at 18 years old. Entwined amongst these memories are the make-up items including Kahlo’s  eyebrow pencil ,’Ebony’ and her Revlon lipstick ,’Everything’s Rosy’ which both appear to be in mint condition, acting as a poignant reminder of her instantly recognizable mono-brow and ruby red lips  that became something of a self-portrait trademark.

“ Many believed her to be a a Surrealist, but she wasn’t. She never painted dreams, she painted her own reality. ” – Charles Daniel McDonald

Her immobilisation following the crash and long periods of enforced bed rest are thought to have helped galvanize Kahlo to explore self-portraiture using mirrors, which were attached to her bed. As such, these promoted a strong interest in exploring her own identity and that of her country; thoughts which are reflected in her personalisation of many spine braces and bodices with vivid color and inclusion of symbols relating to Mexico’s cultural identity. 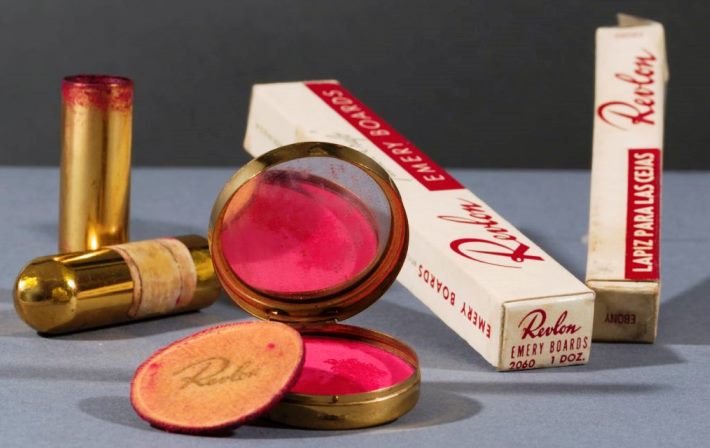 With the Tate Gallery having recently referred to her as one of the most important artists of the twentieth century, there is now a resurgence of interest in Kahlo’s work. She is now realised and well accepted as an artist who struggled through great personal and emotional sacrifice to produce her work and is the embodiment of a strong individual of her time who reflected an emerging feminist ethos out of the chaos that came to be known as the Mexican Renaissance. Just the ticket to empower the next generation of women of today.