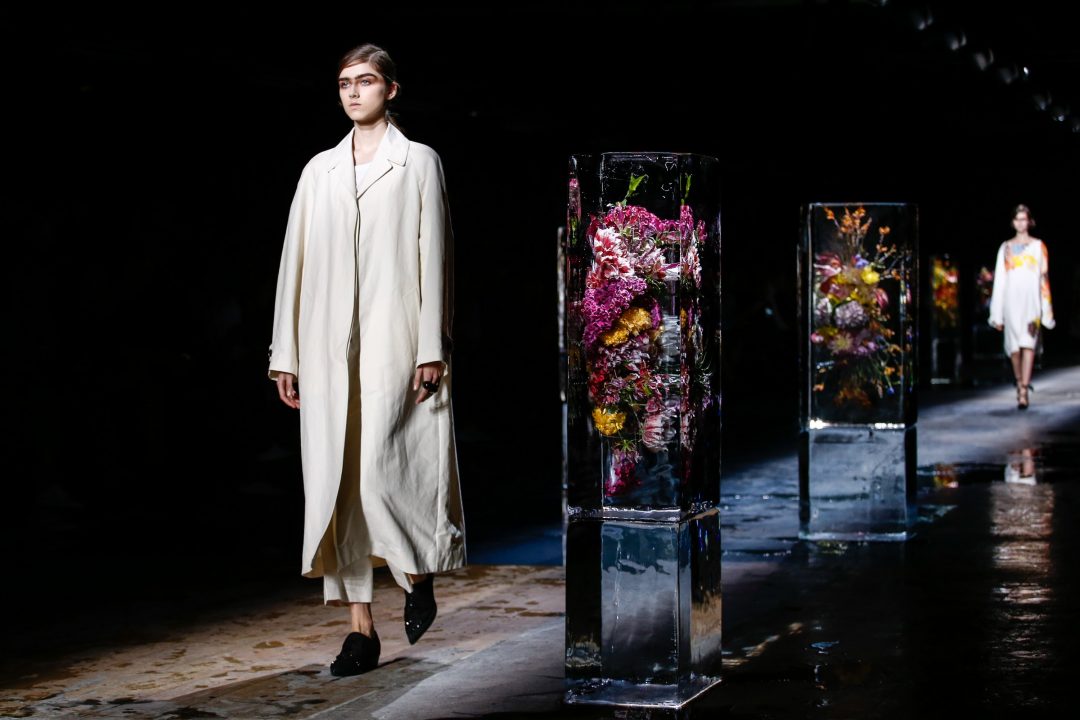 It may seem strange or at best, a little odd that as the thought of winter wear chic is rapidly approaching the fashion industry, we turn our thoughts albeit briefly, to the more fragrant times of past with a brief stroll through quite literally, the perfumed garden of fashion.

Take for example, the set design for Belgian wunderkind Dries Van Noten’s highly anticipated woman’s wear showcases – which at best are superb but the garments themselves here, only tell half of the story. His 2015 spring / summer ready to wear collection saw a model army strutting their style above a lush, green carpet which was designed by the renowned Alexander Kehayoglou with a pre-requisite collaboration featuring a dual display by renowned Japanese floral artist Azuma Makoto. This partnership gave a visually stunning interweaving of floral printed creations with a veritable guard of impressive sculptured works. 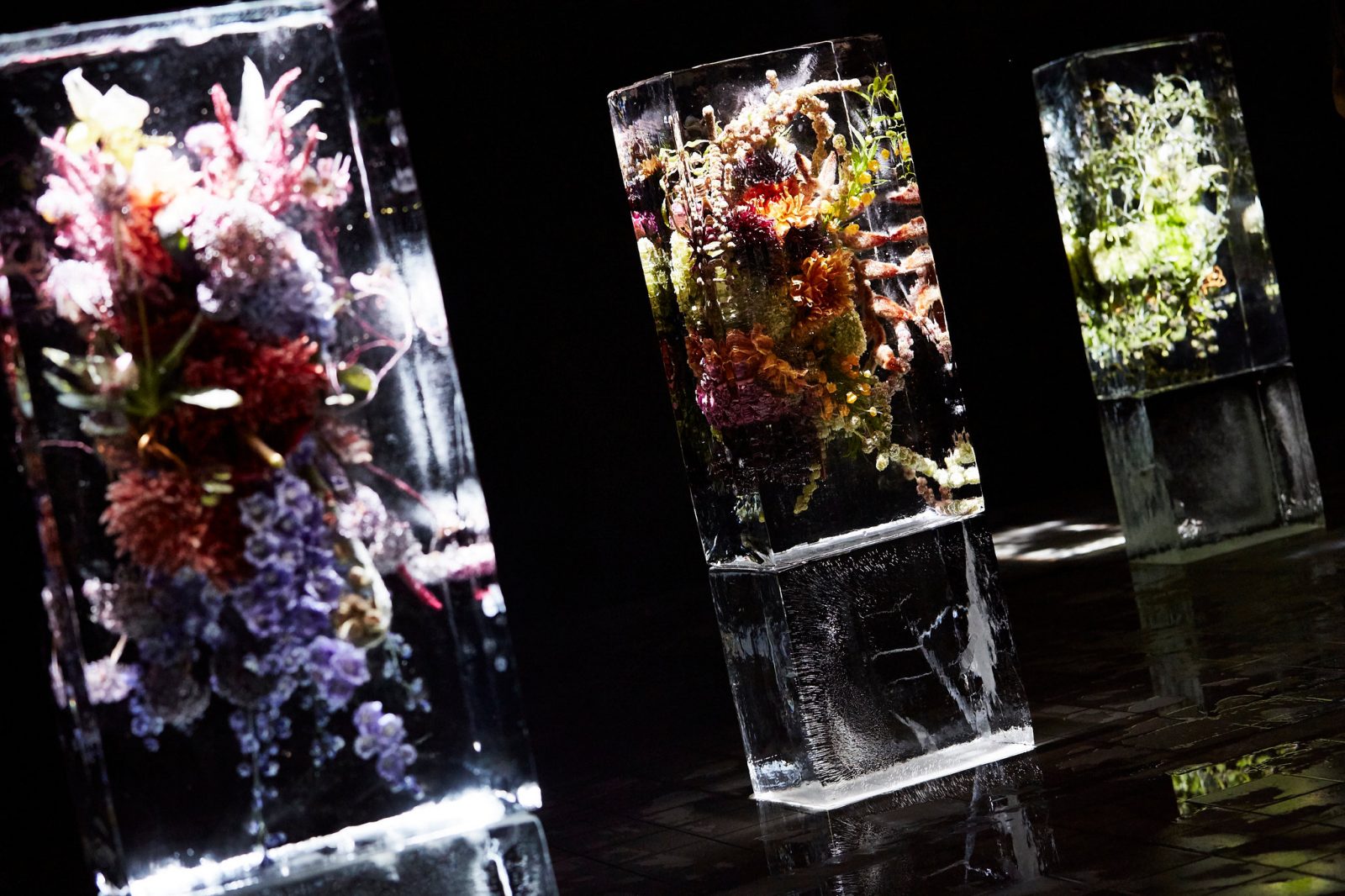 This ´consensus ad idem´ occurred initially at the launch of Van Noten´s 2014 ‘Inspirations’ exhibition which was conducted at Musee Les Arts Decoratifs where Azuma had created a floral installation. Van Noten requested him to repeat his wonderful ‘Iced Flowers’ work which had recently appeared in Tokyo with several enhancements and surprises along the way. Azuma began the innovative work of transforming almost 100 species of rare flora into 23 varying arrangements with the delicacy of hand and eye that only a skilled Japanese artisan could undertake, on this scale.

¨  Dries has a very large garden, and a great interest in flowers. He found me, and said he would like to work with me. Now he’s a friend; I really respect his creativity, and we have a great relationship. He’s just like me in the sense that flowers are not just beautiful to him – he looks at the whole picture, as they wilt, as they bloom. He sees the beauty in all of it.¨ – Azuma Makato

The concept was undertaken within a Belgian Ice House which saw carefully arranged flowers being virtually deep frozen in low temperature water – essentially deep freezing their freshness and texture before transferring the works directly from Belgium to Paris via refrigerated transportation for the show. Azuma was delighted in the end result which saw the flora frozen in time whilst dancing within the transparency of its light – citing the interaction with Dries as “Certain and Strong.” 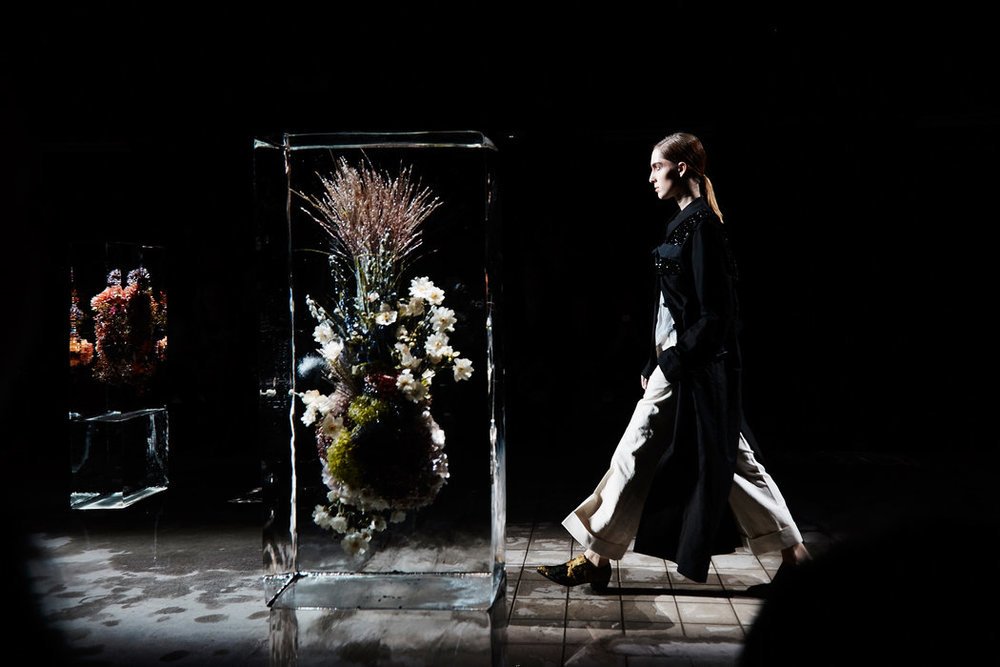 Frozen In Time – But Dancing In Light

This concept of ´frozen florals´ was not the first time that fashion designers had referenced such a notion. For his autumn/winter 2012 debut at Dior, Raf Simons sat guests between composite salons of vertically interconnected floral carpets in striking colours with all attendees being suitably captivated by the reported one million blooms that were used in the installations. It can be remembered that such overwhelming images of freshness and innovation are not tied to the house of Dior though; with Alber Elbaz using framed floral archways in his Lanvin launch and both Stella McCartney and Dries Van Noten continuing to drive such innovative visuals with work by Botanists Patric Blanc and celebrity florist Daniel Ost.

Below, we take a quick sweep around the International fashion garden plucking the best of the current crop from exponents of this blooming trend. 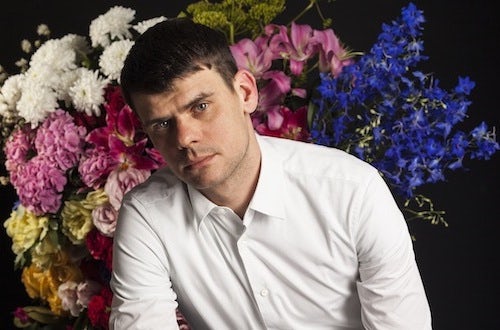 The Dior debut of Raf Simons was created by Paris floral expert Eric Chauvin and Antwerp based Mark Colle – the collaboration putting their business ‘Baltimore Bloemen’ well and truly on the map. Simons initially enlisted Colle to create six stunning plexiglass shrined bouquets for the Jil Saunder´s autumn winter collection in 2012 and the pair have never looked back. 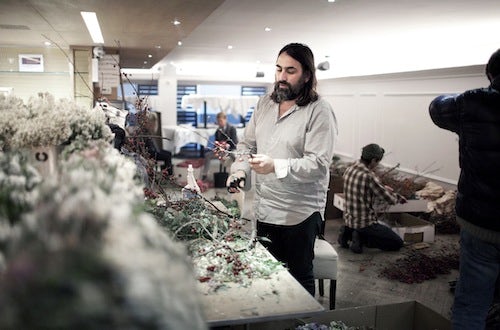 Having come into prominence on Sofia Coppola’s 2006 film ‘Marie Antoinette´, Normandy born Boutemy creations have appeared on the cover of American Vogue in collaboration with photographer Mario Testino and Lady Gaga. He is noted for his delicate arrangements of wild flowers and wheat stems, with floral doorways also being a trademark creation. Dries Van Noten is also a fan having commissioned Boutemy for the opening of his Paris store, because like Van Noten, Boutemy favours artful yet unstructured creativity in his work. 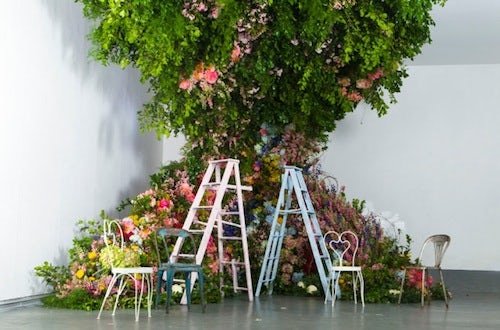 Wildly innovative with briefs ranging from ‘Indiana Jones’ at a Louis Vuitton Soho party to cloning the elegance of one of the Olsen Twins tasteful homes through floral interpretation. To Raquel, the floral brief is but one of the sum of the installation, with equal importance given to the structure of the vessel containing the flora. This can vary from vintage items of traditional construct to innovative state of the art materials depending on the reflective nature of the flora itself. 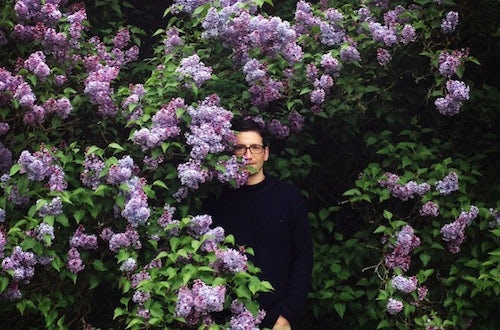 After working for 17 years as Atelier Director for both of France’s most treasured fashion labels, Rambert opened his namesake studio ´Rambert Rigaud Fleuriste en Herbe´ to specifically serve the fashion industry in his own unique style. Serving fashion houses as clients with Dior and Saint Laurent ( with both being regular patrons) alongside Carven, Cartier and London footwear brand Charlotte Olympia amongst his premium clientele.