Funny thing about troubling times: they either make fashion fiercely forward-focused, or self-protective and inward-looking. If the former was the case at the New York shows last week, where designers decided the time had come for true optimism, Britain’s Brexit-torn capital, perpetually pulled through a seemingly eternal EU break-up, expressed the latter at London Fashion Week. Through its five days of shows, the city’s fashion stars looked to the familiarity in which they find comfort. Christopher Kane presented a collection of recycled archive classics – star motifs, coloured liquid patches, neon lace, bolts and balls and a general CK sci-fi sentiment – justified in a timely message of “eco-sexuality” you might define as a fetish for environmental and climate consciousness. “I love science and nature. I talk about sex and human behaviour, so it just felt right,” Kane said.

Jonathan Anderson drew on similar notes in a JW Anderson collection centred on repositioning and repurposing an existing wardrobe, slashing up blouses, re-sculpting tailoring with ribbon and strings, and decorating purified silhouettes with the eternal rock of crystal. Do what you know, use what you have: in London this season there was no place like home. “I was looking back at the things I’ve done in the past five years that I’ve liked most and doing them more and more, and bigger and hopefully better,” Molly Goddard declared, similarly owning the gesture of self-referencing. She expressed it in the sizeable tulle constructions and ballooning silhouettes for which she’s known, painting a magnified parallel to the volumes that played out on the runways of her peers. 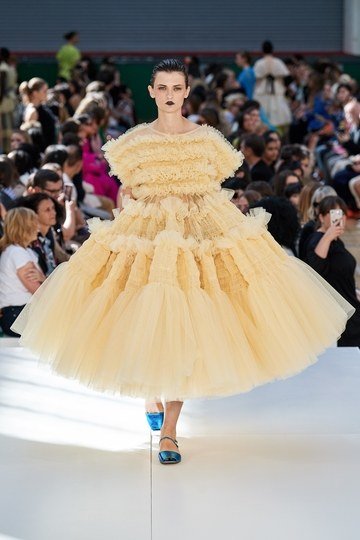 Erdem Moralioglu graced us with one of his trademark history lessons in a collection about Tina Modotti, who migrated from Italy to America in the early 20th century and embarked on a life that would see her through modelling, acting and photography before she became a communist activist and agent in 1920´s Mexico. Erdem finds comfort nowhere more than in the annals of the past, employing it as a conduit for his signature rich textiles but also the waistless silhouette that expanded throughout the London shows. Not least on the runway of the shape’s biggest proprietor, Simone Rocha, who underscored her own feeling of familiarity by referencing the wren boys of her Irish homeland, and the ruffles and tablecloths of the interiors of the village houses they seek out on St. Stephen’s Day.

David Koma went beyond the borders of Great Britain but applied the discoveries he’d made on the Kenyan Savanna to a distinctively Koma-esque collection characterised by his modernist retro-futurism. Michael Halpern revisited his hometown of New York , his constant reference in a collection that rekindled his childhood obsession with the Ziegfeld Follies through the lens of Barbra Streisand in Funny Girl (and the way she dressed in his go-to decade, the 1970´s). It made for a quintessential Halpern collection epitomised in a sack dress silhouette echoed at Emilia Wickstead, who found similar childhood inspiration in Little Women. A comforting classic in an age of upheaval? Mind you, if designers are burying their heads in the safety of the known it’s not because they’re ignorant to the horrors of current affairs. A no-deal Brexit could cost the British fashion industry up to £900 million. 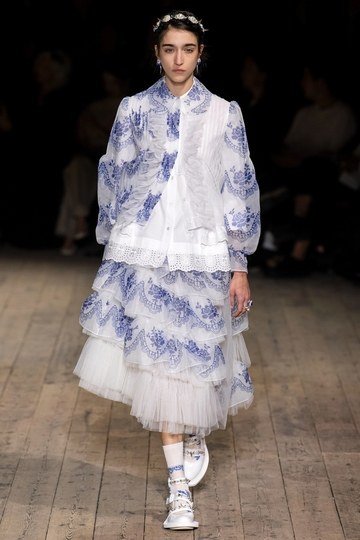 You could call the romanticism proposed by the London designers escapism, but they’re as acutely aware as anyone of the heart-breaking irony in that observation. Soon we won’t be able to escape, forever trapped in international passport queues, dreaming about the European Union to which we once belonged and which no one in the multi-national British fashion industry ever wanted to divorce. The written notes for Richard Quinn’s show – the newest instalment in his exploration of haute couture mused about “defending a dream-world of fashion from the nightmare of reality”. He closed it with a series of bridal gowns. Maybe it was his way of proposing a new hand in marriage to the Union. They do say love conquers all. Even the government? Not if you ask Richard Malone , an Irish citizen who came out for his bow wearing a t-shirt that read “Fuck Boris”. 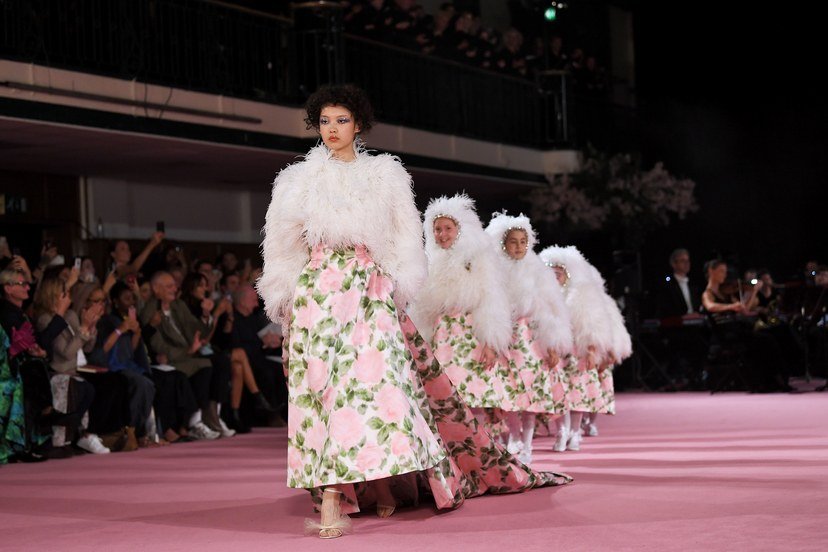 The Brexit-fuelled SOS continued at Matty Bovan, who created a highly utilitarian collection where “hospital colours” painted flight suits and compression suits, and all the components of the formal and proper wardrobes were turned on their head; often literally, in cinchers that migrated into skirts or crinoline structures that travelled north into top-heavy shapes. Bovan has written an appropriate dress code for a messed-up world balancing between Hope + Fear, the title of this collection, which spelled out the word “rescue” on garments. “It’s very much like standing on a precibus,” he said of the current climate; political, social, environmental and so on. “For how long are we doing this kind of show, being creative, being ourselves? Around the corner there could be very dark and very serious implications.”

At Burberry, Riccardo Tisci celebrated an outward-looking Victorian Britain through his Italian lens. “I’m obsessed with Victorian times,” he declared. “It was a moment of evolution in this country in many ways and it was a great aesthetic. By coincidence, Thomas Burberry started his company in Victorian times. So, I started working around that period: the very beginning of the company. I wanted to do a modern interpretation of Victorian style, so I took its most dramatic shapes and made them in jersey, which is what women and men want today.” The only collection which didn’t seem to join the self-referencing train, whether on a personal or national level, was paradoxically also the week’s best. In a delectable stream of louche 1970´s tailoring and glamorously easy flou, Victoria Beckham aced a new bourgeois heritage sense of sexy for her brand. 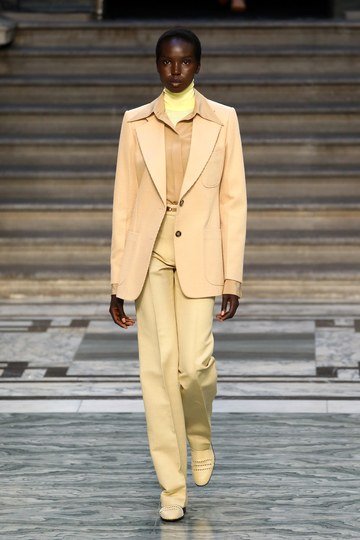 “Dresses are full but light: lots of ruffles everywhere, dancing around the girls when they’re moving,” she said. “The way they’re constructed, they look like they’re suspended. You just see a little body inside quite a massive and really light fabric, which I really like. It feels sexy, not in a tight or constricting or short way, but in a different kind of way.” In a Brexit lead-up to the inevitable, we could all do with feeling a little less constricted, and a little more broad-minded. 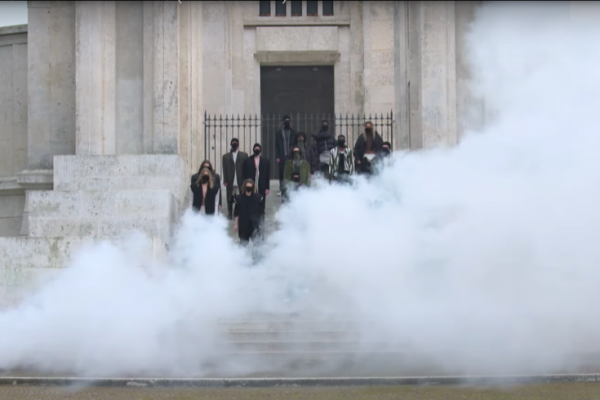 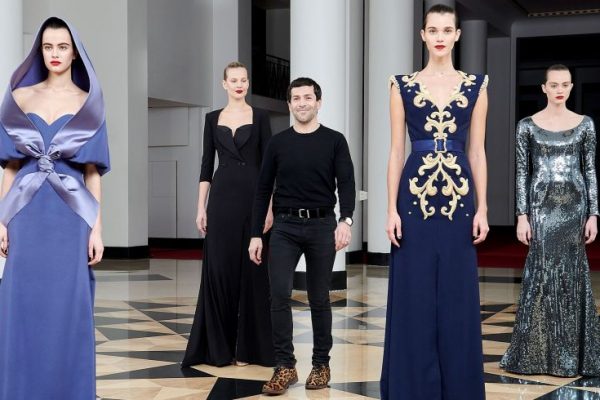