Contrary to belief, it wasn’t New York nor Paris which made the 60’s swing. During this era, London was considered to be a metropolitan mecca for youth and the partying was epic; with Mary Quant mini-skirts and the new wave sounds of The Beatles carrying across the city’s airwaves. As with any epic party comes an epic recovery, and it wasn’t until the late 80’s and early 90’s that ‘London baby’ was to be shaken up yet again by not only a new set, but a new generation of iconoclasts with a brand new way of thinking and dressing.

If London was the centre, then Soho was the nu-wave nucleus for these living day libertines. During the day, they would congregate to study at the infamous Central Saint Martin’s College; whilst at night, they would re-join on a different turf in an attempt to out dress each other on the sartorial social circuit. Unlike the more conservative designers who were pandering to the Sloane Square set (with their pin up being the very young and naïve Princess Diana), this brazen brand of bohemians wanted to upscale the embodied traditions of the established social scene. Cypriot designer Hussein Chalayan remembered of the time that, “we were there to challenge social and sexual mainstreams, you know, we were not only doing fashion.” The raison d’etre of their work and beliefs was the “clash between tradition and transgression, the past and the present that defines English culture.” 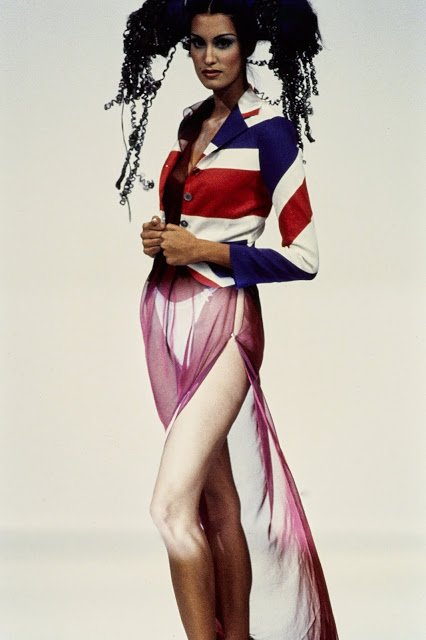 Out of all designers from this movement, it was Chalayan who was preoccupied with the political aspects of identity as communicated through dress. This was a notion which was also recognised by his continual referencing of Muslim clothing and its cultural consequences. He also voraciously referenced the field of media – interacting with architecture, technology and furniture design. Even to this day, out of his peer group, Chalayan remains the most minimal and financially independent of the set.

“The young London designers of the 1990’s broke the rules because they wanted clothes to be a part of the world we live in, and they wanted their designs to interrogate our world as well.” – Hamish Bowles

The profiles of Alexander McQueen and John Galliano (both alumni of Central Saint Martins from 1992 and 1984, respectively) intertwined over the years. Although their trademark aesthetics set out a stark contrast to each other, they did share the passion of being ‘a fantasist’, with each designer on his own individual way. Galliano’s preference was the narrative of historical romances stating, “I was drinking it, living and breathing it. I don’t know, I guess I was starting to get lost more in the history and illustrations, cartoons and the way they depicted these characters and often summed up a line.” McQueen in contrast, used his presentations to project sci-fi horror stories or to evoke the macabre tension of the black and white Alfred Hitchcock era.

During the 90’s, the energy in London was so vibrant that it became a sounding board and breeding ground for start-ups, collaborations and luxury conglomerates which needed a ‘new lease of life.’ 1995 saw the start of the great British revolution when John Galliano became the first Englishman to head the quintessentially Parisian house of Givenchy. When he jumped ship to Christian Dior, Lee Alexander McQueen immediately took his place there, making giant waves in the name of Rule Britannia. Next up, there was a fresh faced Stella McCartney, who not even two years out of graduating from Central Saint Martins, was sent across the channel to revitalise Chloé. This was a role that the pioneer of sustainability accepted, but only once the house agreed to stop the use of leather manufacture within its ranges. 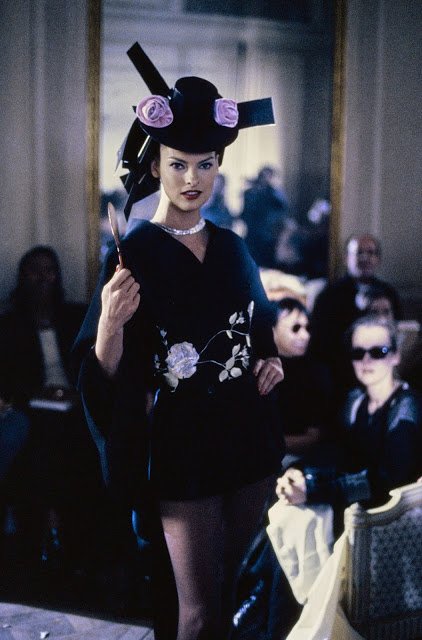 McCartney brought a practical but feminine focus to the brands aesthetic with an emphasis on the daily practicalities, rather than the superficial aesthetics. “I wasn’t trying to editorialise my work,” she says. “I just wanted to design clothes that I could wear and that all my girlfriends could wear – and they did. That became quite powerful.”

Chalayan, McQueen, Galliano and McCartney – each of these designers, in their own way, helped to shift the attitude to fashion by taking it in a more progressive direction. “I think London designers always feel empowered to follow their sense of the world as much as their sense of fashion,” said Mark Holgate. “There’s a belief that fashion isn’t just really about pretty frocks and pretty clothes.” Instead, their fashion was a narrative with which to explore self-expression and emerging trends with collections as a means to create your own rules for living in the world – regardless of where the customer was, both in attitude and geography.