With Milan Fashion Week coinciding with the Global Climate Strike, the shows had to deal with the questions on everyone’s minds. As a polluting industry, every brand in fashion is now expected to tackle the environmental crisis and do its part. Before the shows began, Gucci announced that it had gone entirely carbon neutral. The statement allowed Alessandro Michele to separate the creative inspirations behind his collection from the global warming conversation, although his decidedly downsized invitation – just a humble envelope – served as a reminder of Gucci’s greener awareness. A lot of other houses in Milan could learn from that. Nobody needs big chunks of plastic with an address on in order to find a show venue. In fact, thanks to the internet, nobody needs a physical invitation at all; nor printed press releases on chairs or any other material that reads just as well in an email.

Miuccia Prada opened the week, confronting the difficult subjects head-on. “On one side, we want to save the planet and not consume and not spend,” she said. “But then people won’t have jobs, they won’t have money, and then we’ll have to sell more again. It’s a gigantic political problem,” she continued, referring to the environmental crisis, “that everyone needs to address in their own way and through their own efforts.” She stripped away the commercial, cartoonish graphics that have played a part in her designs for a while, replacing them with simplified and refined decoration and a calm, puritan, expensive drabness that felt more concise, considered and – to use fashion’s favourite word – intelligent than the in-your-face prints that have defined recent Prada seasons. 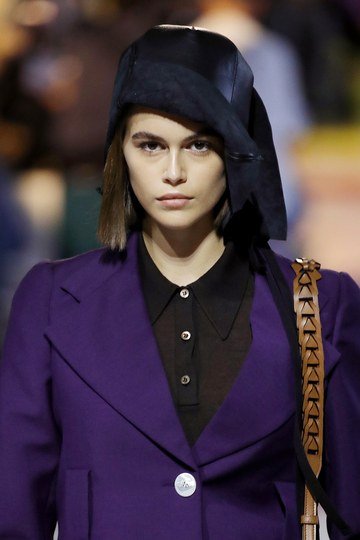 Many of Prada’s clothes were the kind you’d want to keep forever: essentials, basics, staples – whatever you want to call quiet, quality pieces – with a twist. “The idea is to do something that lasts and is less throwaway,” she said. “It seems there is always too much fashion, too many clothes, too much of everything. It was about going back to simplicity. Lust, not disposability.” While the environmental problem is a hard nut to crack, you couldn’t fault Prada’s sentiment of taking “little steps”, i.e. buying less crap and more quality. “The person should be more important than the clothes,” she said.

At Gucci, Alessandro Michele tapped into a similar philosophy, opening his show with a series of “blank” showpieces meant to illustrate the way in which fashion – and its peanut gallery – tries to limit self-expression. “I chose to organise the show this way because I was questioning myself about rules and fashion,” he said. In the selling collection that followed, Michele reduced his signature opulence considerably, creating an almost minimal take on Gucci, which of course wasn’t minimal at all. “There were fewer things, so to speak. But can you say that a symphony is better than a piano solo?” Michele asked after the show. “I thought it was very rich. It was like using a typewriter to underline things. I used black to do it. To outline and emphasise the body.” 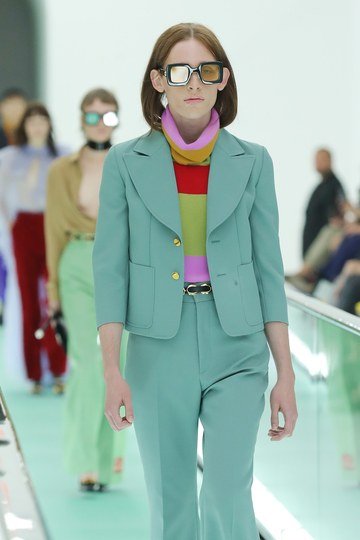 If there’s something in the air putting designers off excess, it’s indicative of the attention Daniel Lee – of ‘Old Céline’ studio team fame – is garnering at Bottega Veneta. For all its cocktail elements, his Sophomore collection was rooted in a subversion that felt like a statement against conventional beauty, with all the glamour and excess that often entails. From a little brown dress to rigid utilitarian denim or leather uniforms, a sci-fi aubergine chore jacket, a rust red crackled leather spy coat, or a men’s shoe with a square flat flap elongated beyond the toe-line, every piece in this collection came at you with hurricane speed, forcing you to form an opinion on it. Was it intentional on Lee’s part? “Yeah, otherwise what’s the point? I’m quite black and white. I don’t want to do something that says nothing. You either love it or you hate it,” he said. Lee approached the collection from a point of view of “solidifying the icons”, he explained, referring to Bottega Veneta’s woven leather trademarks.

The addition of Lee’s newly hyped Bottega Veneta has given Milan new life, but it doesn’t mean we need the city’s schedule to expand the way it did this season. With Gucci’s move to the late Sunday slot, the week is simply too long. For Camera Moda, which controls the show slots, the message should echo their own designers’ newfound philosophies of reduction and clarification, something Marni’s Francesco Risso is at the forefront of. “I don’t like to proclaim myself as sustainable but this is our joyous protest,” he said after presenting a collection that was primarily made of organic materials and overstock from Marni’s archives. It was the second installment in a multi-act series of recycling-focused shows that began with his men’s collection in June. 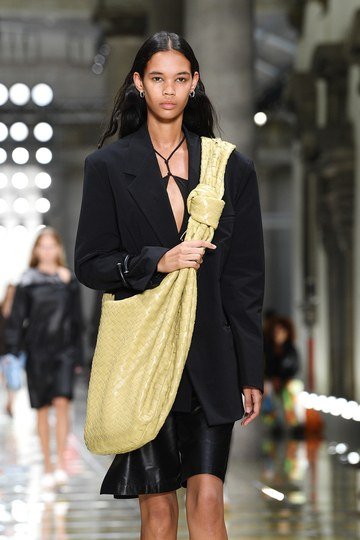 Back then, he suspended a fishnet from his ceiling and filled it with recuperated plastic from industrial and ocean waste, which was then upcycled by the artist Judith Hopf for this set, decorated in tropical plastic palm trees. That motif – the luxuriant jungle one – was unavoidable during the Milan shows. Donatella Versace celebrated the anniversary of Jennifer Lopez wearing her jungle print dress to the 2000 Grammys by inviting the superstar to close her show in a new take on the dress. If J Lo’s sashay down the Versace runway broke the internet on Friday night, it was only appropriate. Silicon Valley invented Google Images (Google collaborated with Versace on the show) in response to the fact that everybody was talking about the singer’s plunging palm print dress in the year 2000, but couldn’t find the pictures online. 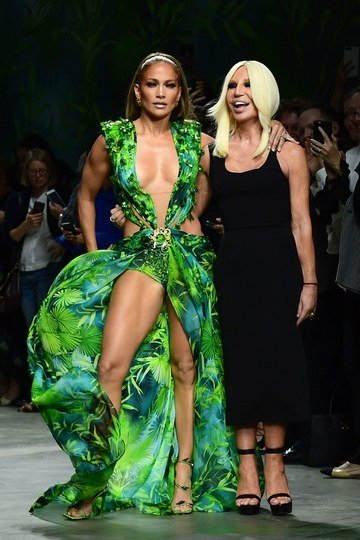 “She got the dress, went to the Grammys, started her career,” Donatella said. “It was a magic moment.” Versace reimagined the dress in multiple garments including a sharp-shouldered draped dress in the original print, a skinny suit with a matching shirt, and a long-sleeved super plunging dress cut at the knee in a fuchsia version of the bamboo motif. All those saturated tropical prints couldn’t help but make you think of the Amazon, which continues to burn after months of destruction. Perhaps it had subliminally entered Dolce & Gabbana’s minds and resulted in a jungle-themed collection that Stefano Gabbana called “a breath of fresh air”. Like Prada’s, their collection pushed for quality over quantity: craftsmanship over fast fashion, in materials that evoked a feeling of the organic, from raffia to tuftage and burlap.

“Fashion in this moment, in my opinion, is very sad,” Gabbana said. “There are not a lot of fashion designers left. It’s all about big companies, who do everything by marketing and bags and sneakers and T-shirts and this and that, without passion.” Giorgio Armani closed his show – titled Earth – with a palm leaf dress forged in crystal. While his collection – like so many others this week – wasn’t rooted in state-of-the-art sustainable approaches, you could choose to see the message he imbued it with as a gesture of future intent. “We all have to do our duty to save the Earth and put attention to it again,” he said. “We’re obviously part of an industry, but that industry needs to take measures so that these techniques are brought to us.”

There were botanical motifs in the Fendi collection, too, but for a brief moment any climate associations were eclipsed by a moment in fashion history. Following the death of Karl Lagerfeld in February, this season marked Silvia Venturini Fendi’s first-ever women’s ready-to-wear collection creatively directed entirely by herself, for the company her grandparents founded. “He was the captain so my life has changed, in that today I decide for myself,” she said. “Before there was a dialogue. But he was in Paris and I was in Rome. He wasn’t here every day. I had a lot of freedom. Today there’s not the dialogue there was before, so I feel the responsibility very much. At the end of the day the choices are mine.” 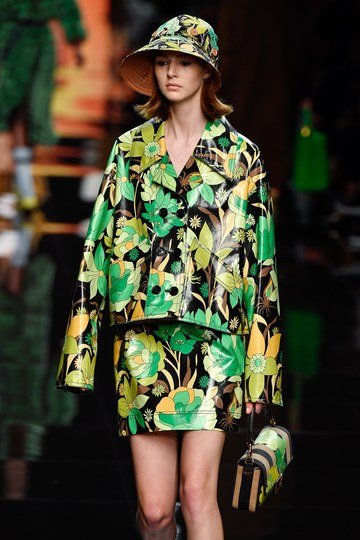 If some of us had wondered if her solo interpretation of Fendi might lean more towards the menswear she already oversees at Fendi – and, in the same process, her tailoring-based personal look – we were right. She tweaked Fendi to feel a little more approachable, a little more wearable, a little more covetable for the contemporary woman. “I don’t put the woman on a pedestal the way a man would,” she reflected. “I always ask myself, would my daughters wear it?” Her philosophy materialised in boxy skirt suits, oversized quilted chore jackets, utilitarian coats and shirting that felt so very authentic to her persona, and, in turn, spot-on for what Fendi should be reaching for after Lagerfeld.