Milan’s SS22 men’s show season took place at the weekend and from where we were sitting – in front of a laptop on the sofa, if you’re wondering – the whole affair looked a little more like the fashion weeks we knew and loved in TTBC (the time before Covid).

Although many designers – including Prada, Fendi and Ermenegildo Zegna – chose to once again mount digital films to showcase their collections, there were a handful of brave brands – Dolce & Gabbana, Etro and Giorgio Armani – which decided to mount IRL shows with IRL audiences.

The clothes, too, were roundly imbued with a sense of freedom and fun not seen for a good few seasons in Italy’s fashion capital. Indeed, it felt as though many of the designers that showed across the weekend had managed to shrug off the ennui forced upon them by the pandemic and consequent lockdowns.

Snazzy dress suits were back on the agenda, as were sequins. There were metallic lamé trousers and silky shirts and stupidly short shorts. There were shirts and ties and shoes not made from rubber. The clothes were bold and energetic – made for a life beyond the living room – and they were extra appealing for it.

Leading the octane-soaked surge was, naturally, Dolce & Gabbana. Titled #DGLightTherapy, the brand’s SS22 collection was inspired by the strings of fairy lights draped between buildings in the holiday towns of southern Italy. It was a specific point of influence that translated into densely bejewelled sweaters, jackets, blazers and bucket caps, which looked like pieces of armour Liberace might have worn had he ever gone to war. 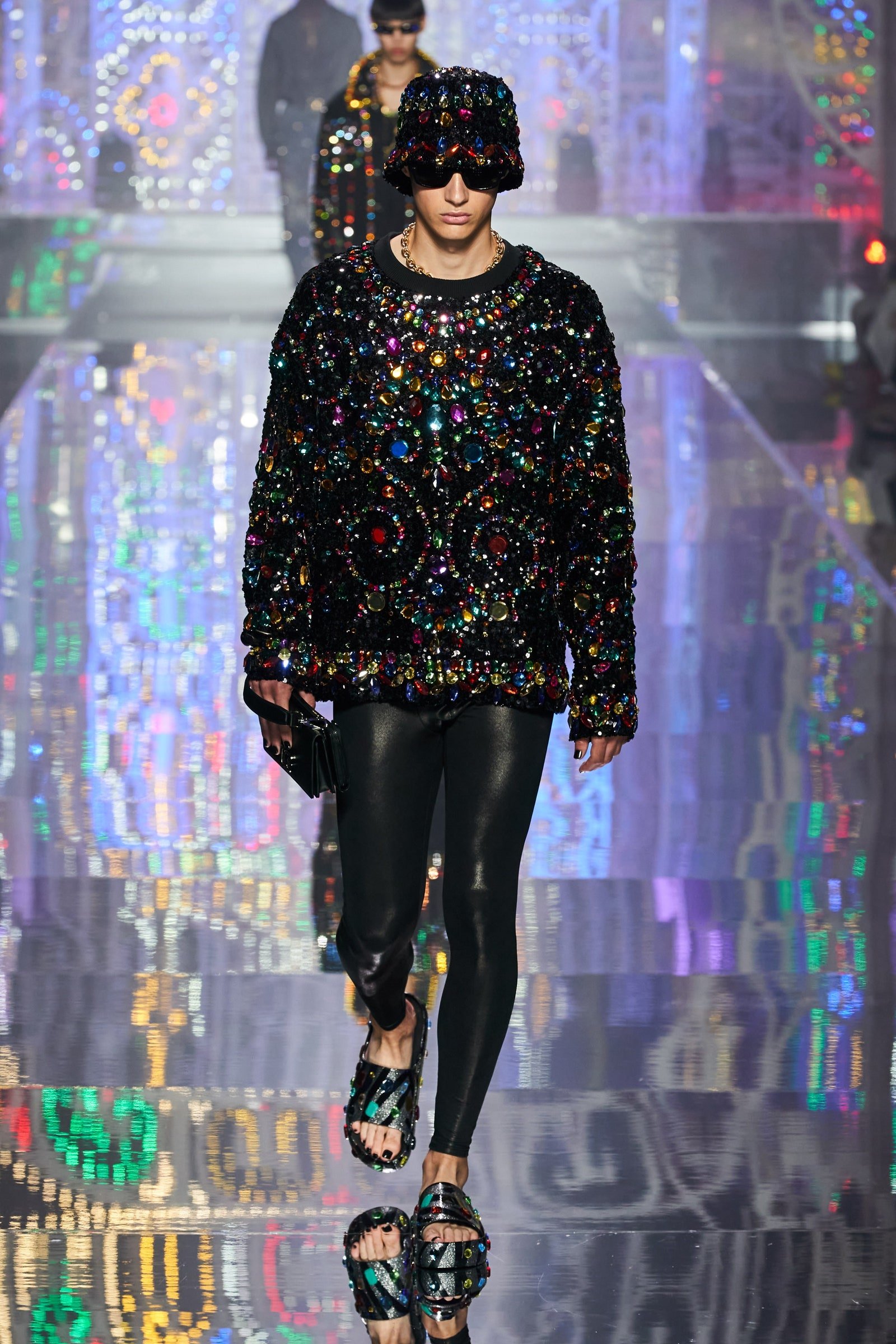 Unapologetic and bold, it was also a return to form for Domenico and Stefano, who have made their names since founding their brand in 1985 by creating sexed-up partywear with a strong Italian accent (AKA clothes terribly suited to the interminable flatness of multiple lockdowns).

At Etro, creative director of menswear Kean Etro showed a collection that looked as though it had been designed with an entire season of partying in Ibiza firmly in mind. Although the Etro family scion is best known for his use of low-key paisley patterns and tertiary hues, the brand’s SS22 collection was full to fizzing with Refreshers-hued lamé trousers in dusty pink, teal and sage, which were worn with naval-exposing silk shirts in matching tones and boho beads. 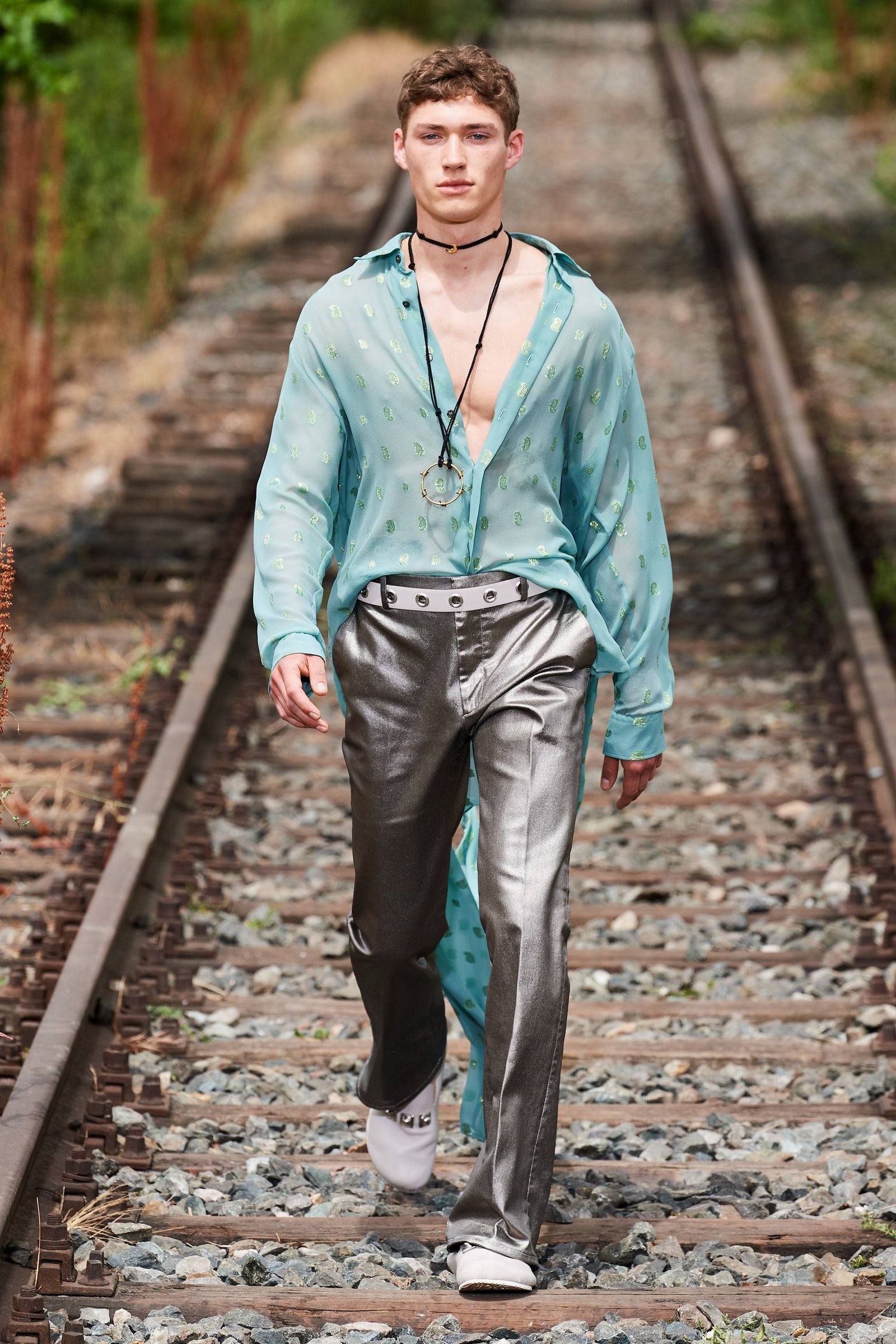 At Ermenegildo Zegna, Alessandro Sartori – the long-serving creative director of the family-owned tailoring house – was a little more circumspect with his fantasy and flair. The designer chose to focus much of his efforts on ultrasoft tailored separates, which looked as ready for wear at the weekend as they did for days working from home, which, in fairness, are bound to remain a fixture for some time to come.

There were moments of joy to be found within, however. A candy-pink deconstructed suit near the start of the show felt perfect for all of the big summer weddings set to take place over the course of the next few months, as did the aquamarine co-ord pictured below (for a lovely beach wedding, perhaps). Elsewhere, oversized camp-collar shirts in brilliant white and loosely knitted polo shirts in carnation pink were stitched through with youthful threads not commonly found in Sartori’s sewing kit. 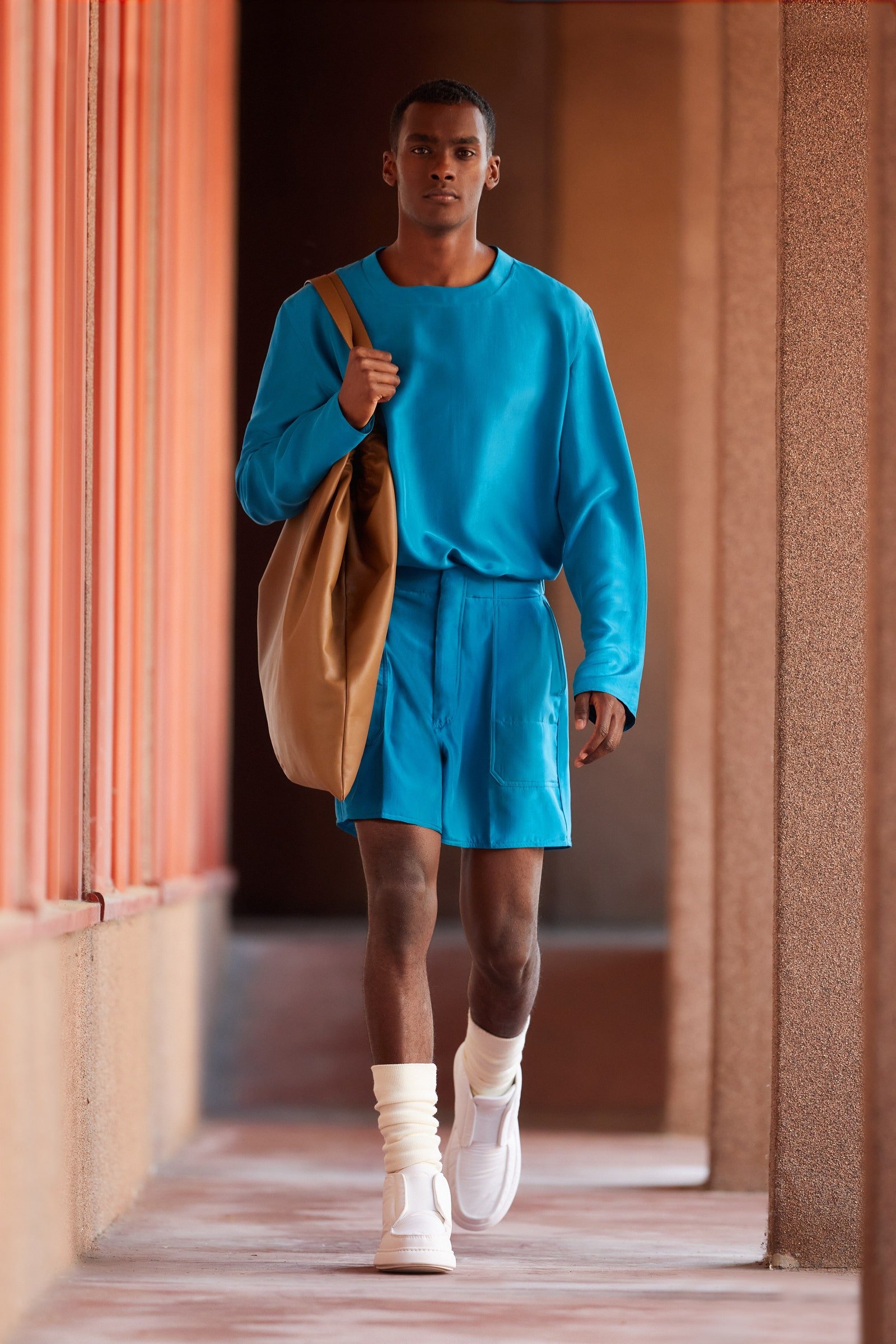 At Brioni, Norbert Stumpfl – the company’s much-celebrated Austrian-born executive design director – stuck firmly to the rigorous tailoring codes of the Roman house. And although cuts were roomy, trousers pleated and fabrics fluid, the suits, coats and jackets on show were as far as possible away from the tricksy “hybrid” two-pieces and separates currently being peddled at so many other tailoring brands right now.

The star of Stumpfl’s show was a painstakingly woven metallic jacquard tuxedo jacket, which the designer teamed with a perfect pair of black satin dress trousers and some spiffy patent leather slippers. There weren’t any traditional shirts and bow ties on show, but that didn’t matter, because who needs fussy accoutrements when you’ve got a jacket cut like that? 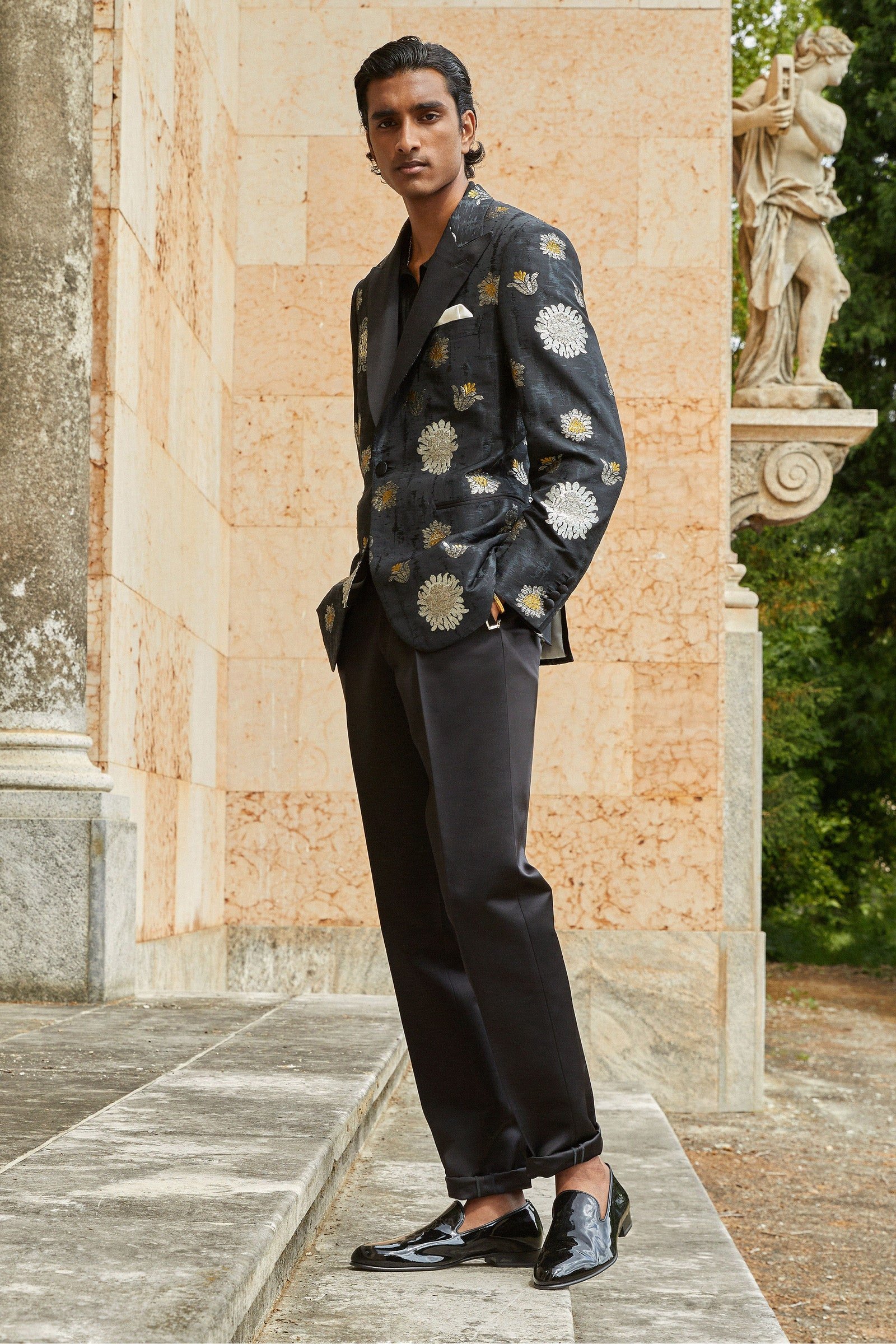 There were plenty more traditional sartorial touchstones to be, well, touched at Brunello Cucinelli. The past few years have proven a boom moment for the grandmaster of all things soft-shouldered and slouchy, whose comfort-focused aesthetic has (somewhat fortuitously) fallen perfectly in step with the casualisation of our wardrobes at the hands of Covid.

Interesting, then, that there were several traditional suits, cut from classic fabrics such as windowpane check wool and charcoal flannel, teamed with shirts and ties in Cucinelli’s new collection. Sure, the cashmere track pants and comfort-focused gilets the maestro is best known for were present and correct, but this was a collection that put the spotlight on tailoring in a considerably brighter way than before. 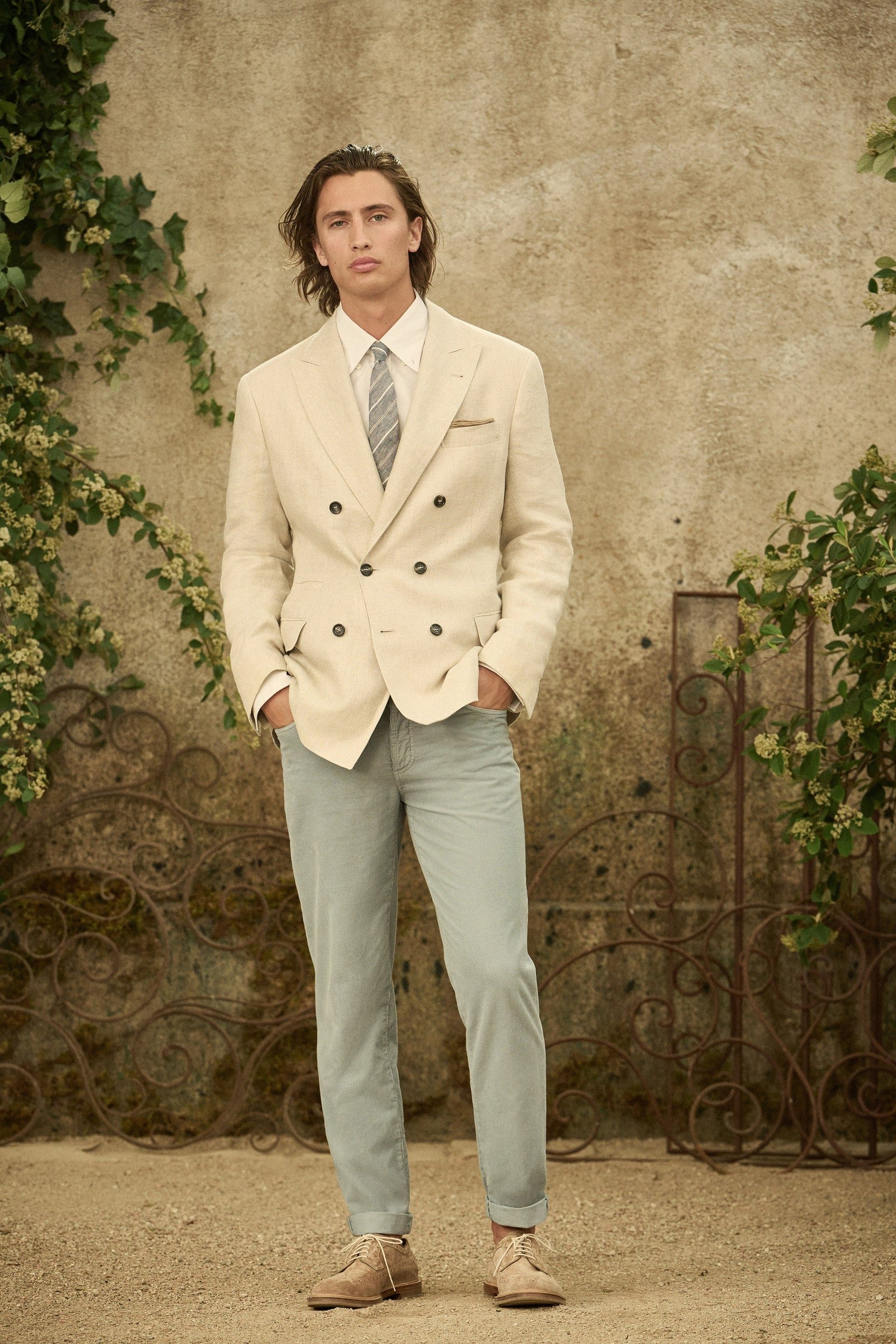 Acid pops of colour were order of the day at a pair of Milan’s most storied tailoring houses. Canali has undergone something of a transformation in recent years, shifting its output into three key lines, the more sartorially focused Exclusive, the sportier Black Edition and the lower key Canali 1934 line.

The pieces from the latter collection, shown this weekend, were inspired by the sun-drenched vibe of 90s LA, which translated into bright floral print bowling shirts in bon-bon hues, souped-up takes on western jackets in caramel hues and a vibey fluorescent Fuschia suit – providing ample proof that tailoring can, in fact, be fun. 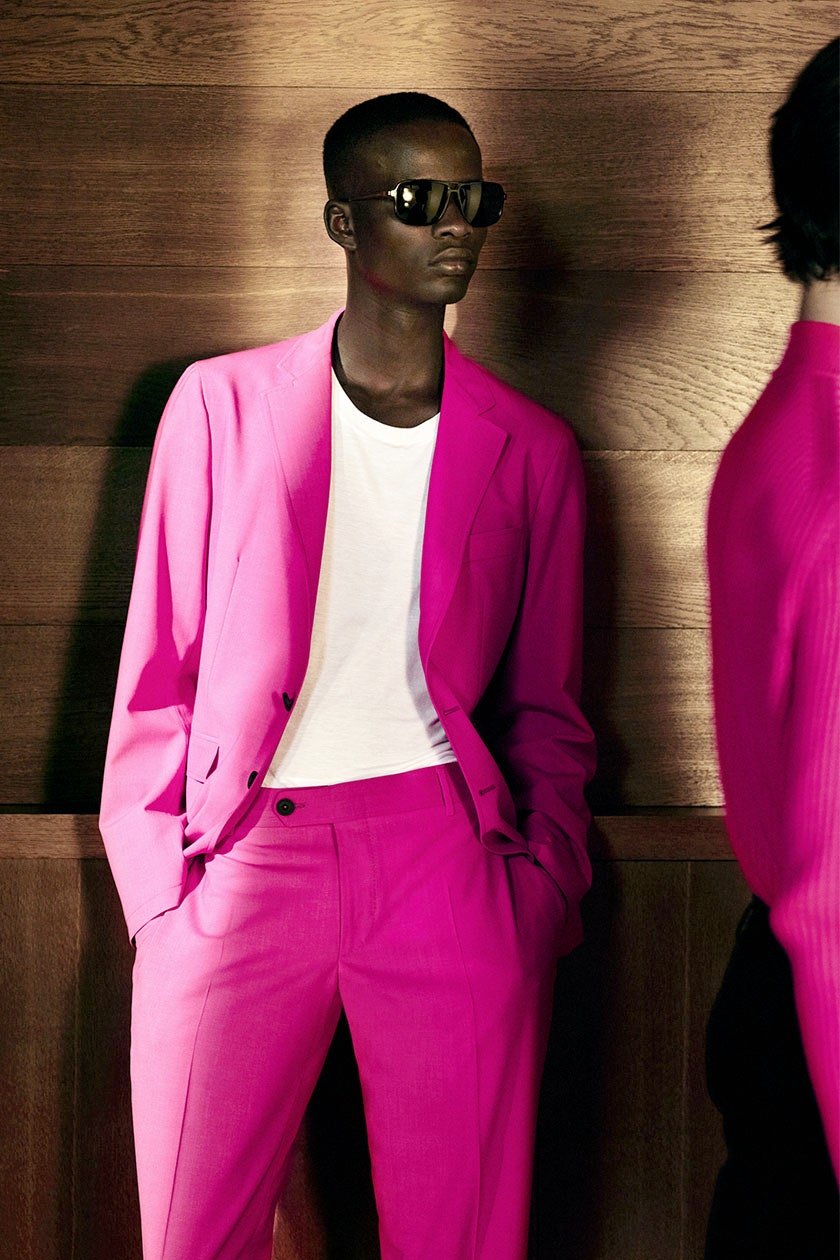 The somewhat specific shade of pink was carried through at the SS’22 offering from the Godfather of Milanese fashion, Giorgio Armani, which rounded-off Milan Fashion Week on Monday evening.

In addition to the swathes of syrupy silk tailoring shown in Mr A’s favoured shades of soft midnight and greige – plus an array of the jazzy geometric waistcoats which so often form the back bone of the designer’s seasonal collections – Armani also showed a perfectly holiday-ready layered sik band collared shirts in hues of electric blue, teal and the aforementioned shade of fluorescent fuschia.

The wide-legged silk Bermudas with drawstring waists shown in combination with the shirts looked like the perfect way to tackle post-lockdown waistline expansions as the weather warms up. Which is helpful. 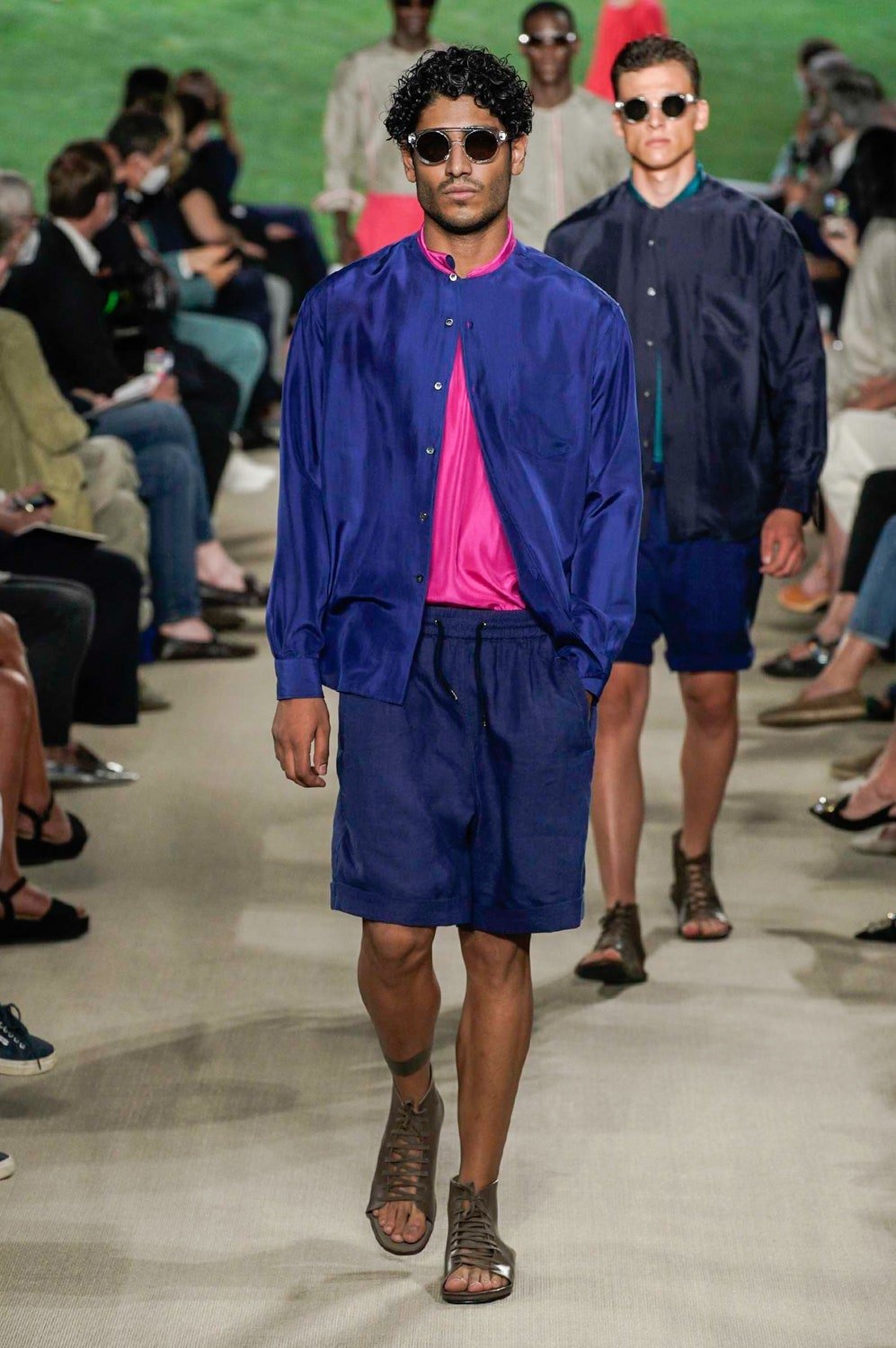 Overseen by somewhat nascent creative director Walter Chiapponi – who joined Tod’s following stints at Bottega Veneta and Gucci some two years ago – the collection was a fun-filled paean to the easy-wearing mainstays of childhood, including primary-hued running trainers, knitted rugby shirts with bold horizontal stripes and bright cobalt romper pants.

For Tod’s purists, however, all the brand’s buttery-soft cornerstones were present and correct: including leather-trimmed shirt jackets, oversized Nappa and canvas tote bags and oodles of driving shoes (better known in the Le Marche region of Italy where they’re made as “Gommini”) both jazzily fringed and otherwise. 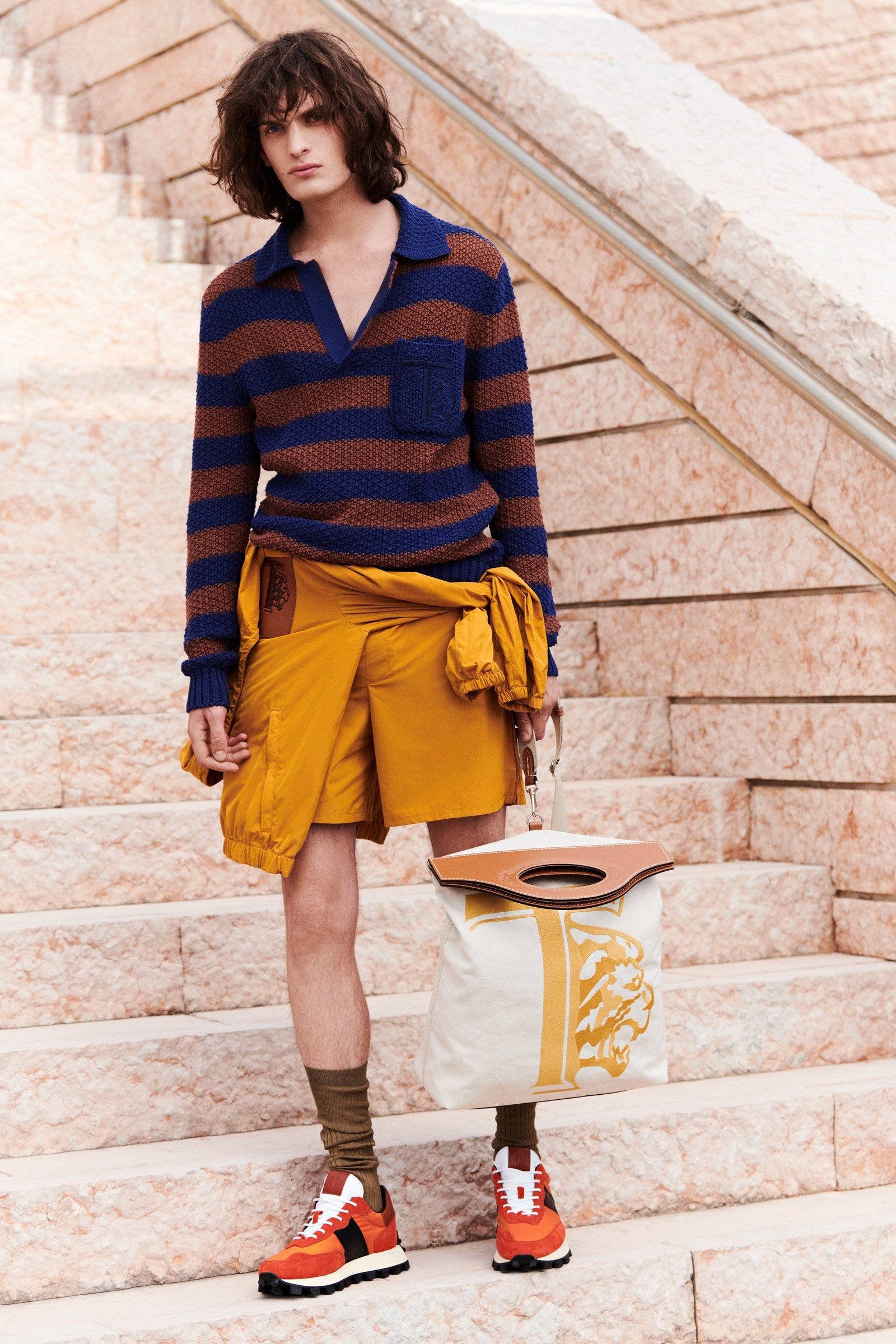 The real fun, however, could be found at the fashiest brands, which showed during Milan’s menswear weekend. At Fendi, creative director of menswear Silvia Venturini Fendi showed brilliantly silly cropped suit, shirt and tie combos in sherbet hues alongside tonal shorts cut like bloomers, tunic shirts designed to be worn like dresses and a particularly tactile intarsia wool T-shirt that had “Glastonbury sunrise” written all over it.

Elsewhere, marshmallow-pink sandals and teeny-tiny cargo shorts had a playful appeal, nod as they did to fashion’s current obsession with all things squidgy and tactile (a shift for which Daniel Lee’s work at Bottega Veneta is to thank in part). 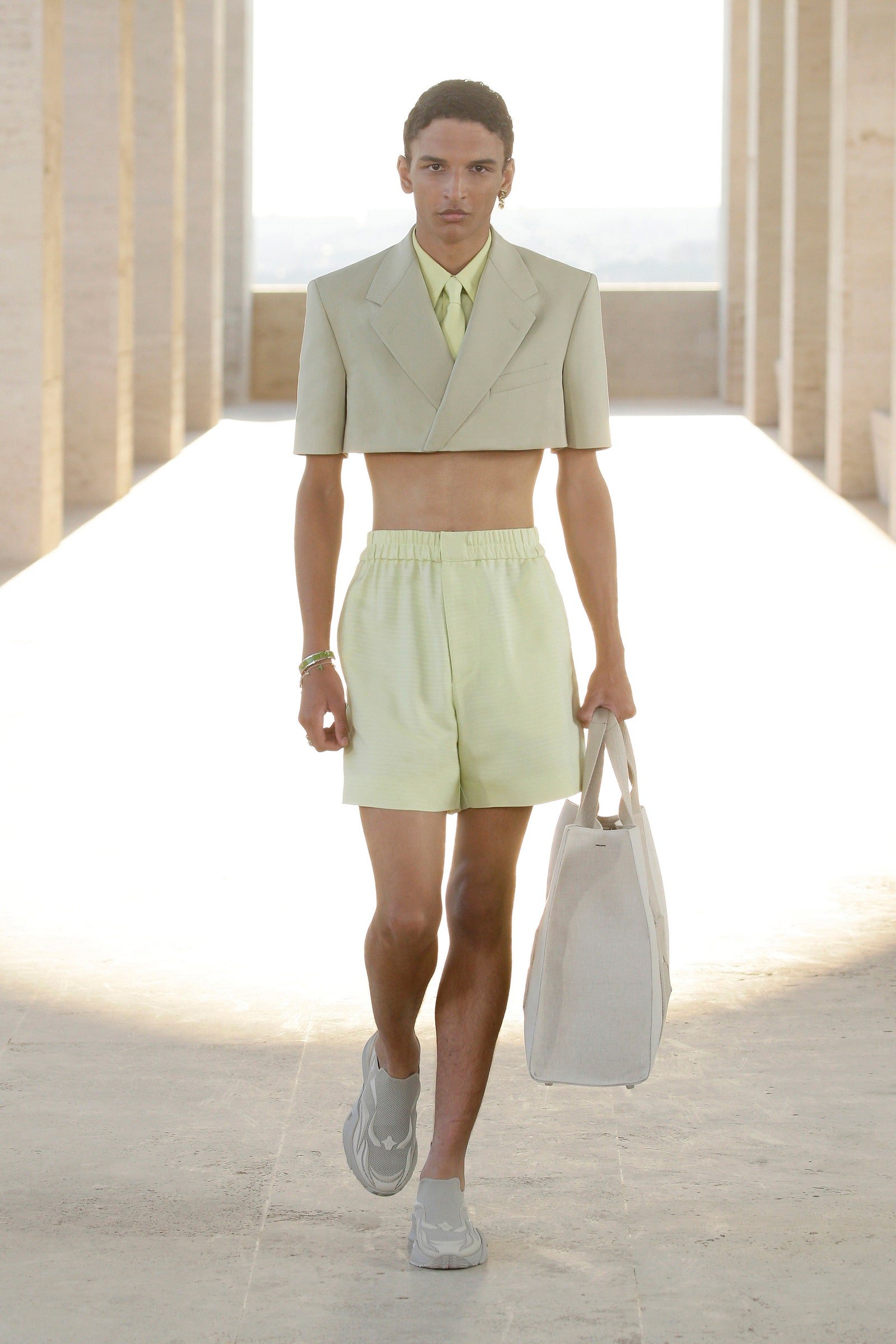 It was a mood mirrored at Prada, were Miuccia and Raf Simons’ second joint effort felt a little less academically rigid than the first, with minuscule jorts, squared-off sandals, summery romper suits and bucket hats furnished with in-built sunglasses painting a poppy picture.

It helped, of course, that Prada chose to show the collection as a film shot on a pristine beach in Sardinia: all azure skies, bleached sands and glassy seas. It’s exactly where we want to be now, in fact, wearing all of the party-ready clothes from this Italian show, Negroni in hand, tanning up to ten. 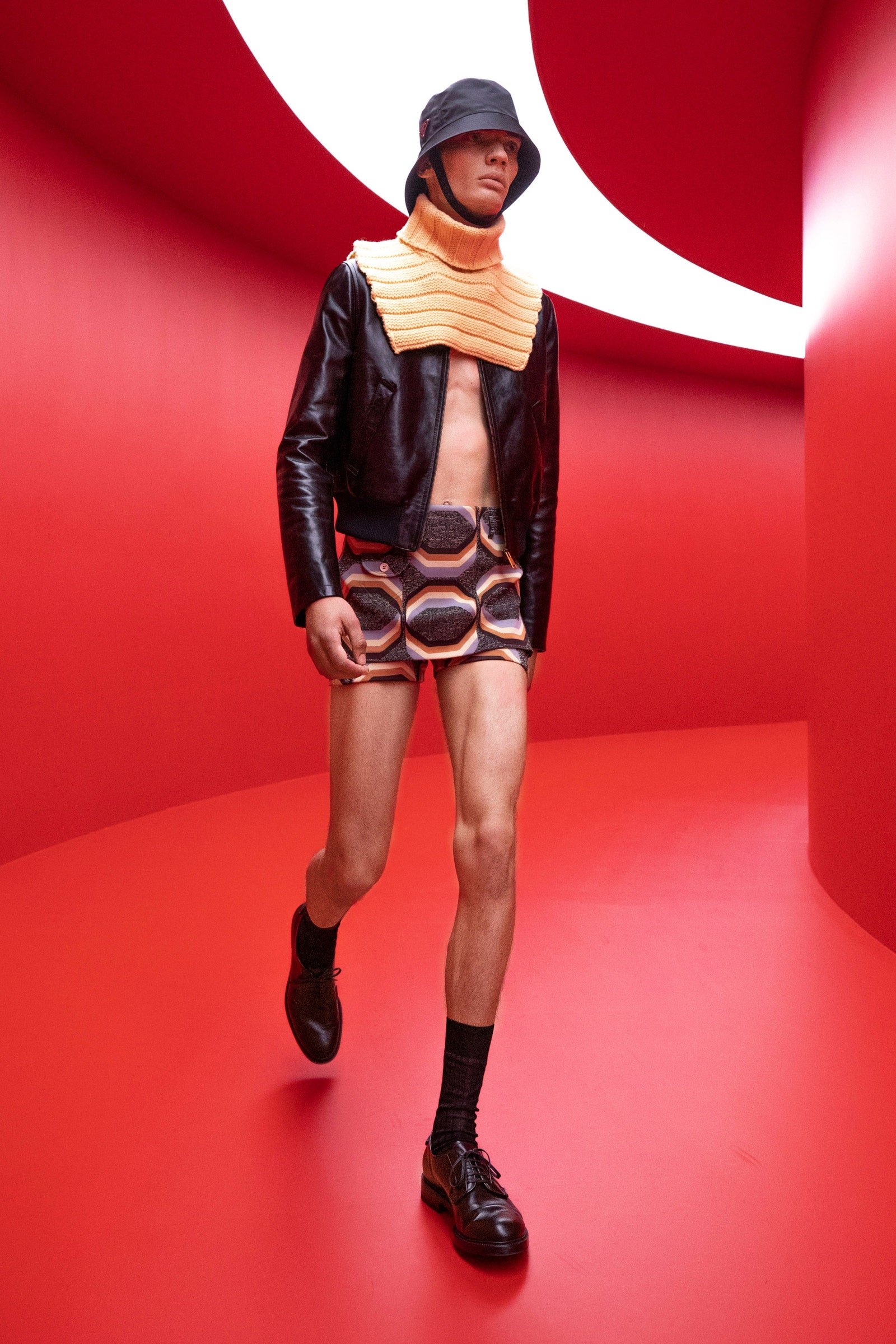 Although, we’ll probably save those bejewelled Dolce sweatshirts for later in the evening…