When fashion went into lockdown, industry debates soon began to fill the digital forum. Was this an opportunity to reform the pace of the industry, its incessant show cycle and complex infrastructure? While most proposals may have been in vain, the discussions appeared to have had a meta effect on designers. This week’s “digital shows” saw a number of behind-the-scenes films, which seemed, to me, intent on demonstrating the industrious internal structures that fashion brands normally hide from public view.

Officially, it was men’s Digital Milan Fashion Week, but the digitalisation of the summer shows has created a schedule where films on haute couture, cruise and menswear – from Milan, Paris and elsewhere – are dropping in one big jumble. Maison Margiela released a 50-minute fly-on-the-wall documentary about the making of its haute couture collection. When the atelier opened after lockdown, John Galliano fitted each of his team members – and his dogs – with GoPro cameras and had drones flying around his studio for over a month. The result was a rare glimpse into the painstaking practices of his haute couture collection.

“This is about the highest form of dress-making!” Galliano reminds us in the film. “It serves a bigger purpose than dressing the elite. It fuels a fashion house!” What may seem like a never-ending promotional game of shows to some is an all-important organism to a designer like Galliano. His film was an illustration of the significance of what he calls “the creative pyramid” where haute couture isn’t about vanity or elitism, but about developing a tone-setting language that informs the ready-to-wear and pre- collections that account for the bulk of business. “I thought this would be a wonderful time to reinforce the ethics of Maison Margiela, and record it some way that would appeal to Generation Y and Z,” Galliano explained. 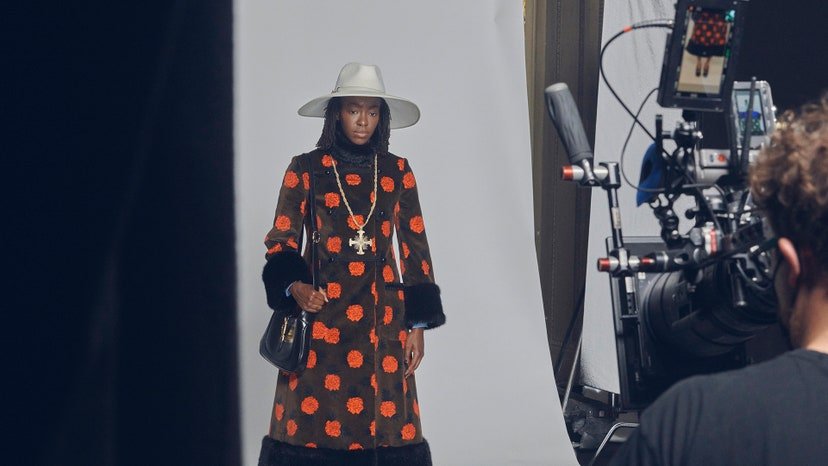 At Gucci, which has announced a new season-less approach for the future, Alessandro Michele showcased his cruise collection – re-titled the “Epilogue” – in a 12-hour live stream from its own campaign shoot, which featured staff from his design studio in place of models. At Versace, Donatella Versace also documented her campaign shoot, turning it into a music video with AJ Tracey. The productions were different, and the clothes worlds apart, but reading between the lines of Galliano, Michele and Versace, I saw a similar subliminal point: if there is no runway show to work towards, the creative process becomes the show itself. If the industry that feeds off designers’ collections wants to debate how often those collections are shown, then we at least have to understand the effort that goes into creating and transmitting them.

¨Officially, it was men’s Digital Milan Fashion Week, but the digitalisation of the summer shows has created a schedule where films on haute couture, cruise and menswear from Milan, Paris and elsewhere, are dropping in one big jumble.¨ – Charles Daniel McDonald

In Salvatore Ferragamo’s cruise presentation, which outlined the history and ethics of the brand in a film that culminated in moving editorial imagery, I thought that the message was largely the same. While many brands produced films that echoed the campaigns-in-motion clips we normally see on their social media channels, others took advantage of the makeshift film format. Prada handed its men’s and cruise collections to different photographers and asked them to interpret it through their lens. “We are used to doing fashion shows. But the moment you can’t do a physical show, you have to invent another work. It is not what we know,” Miuccia Prada admitted. “So instead, we decided to give five different people, five different chapters, and complete creative freedom. The concept is something I have always believed in: that once I create clothes, they belong to the life of people. They belong to others.” 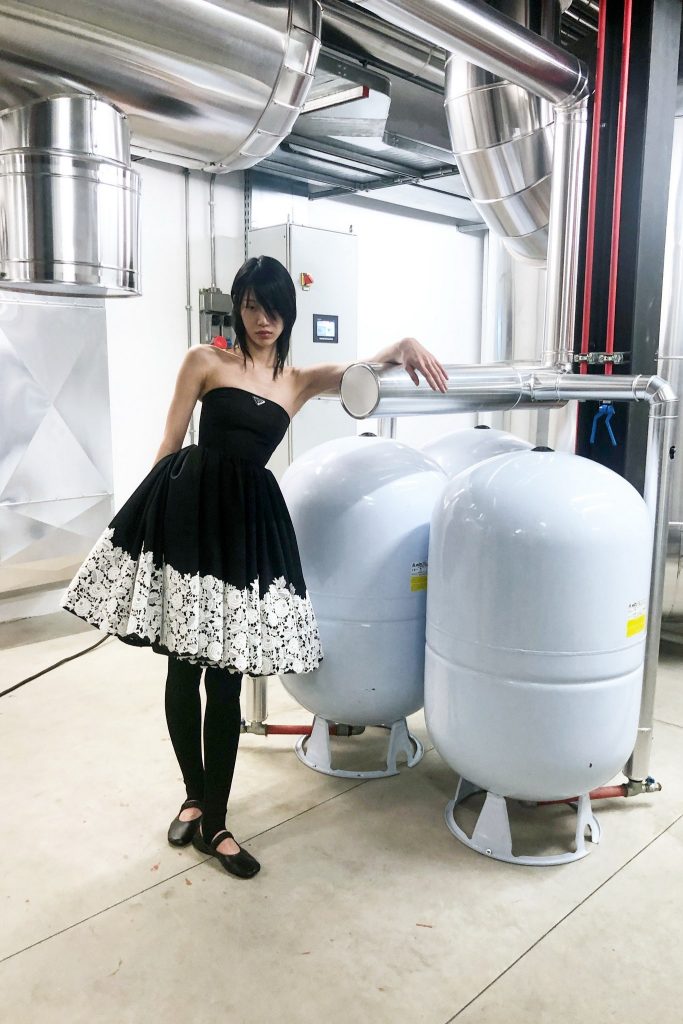 Prada’s was a great and well-executed idea, and one that illustrated how different a collection can look depending on its context. Looking at the stills pictures after – and this case has been the same for every digital presentation – it demonstrated how much the format of film can manipulate the expression of a collection, which isn’t the case on a runway. No matter how theatrically you frame a collection – mega sets, super-stylists, confetti cannons and what not – clothes seen from the seats of a fashion show, in movement on a runway, are hard to manipulate. But the digital shows in Milan weren’t all confined to cyberspace. Dolce & Gabbana, Ermenegildo Zegna and Etro all presented real-life runway shows to intimate audiences.

For Dolce & Gabbana, returning to the runway wasn’t a desperate move to revert to the old ways, but an acknowledgement of the human and economic structures that feed on the organism of the runway show – especially in Italy, a country so dependent on fashion and tourism. It also came from a place of philanthropy. “Slowly, we have to start over, totally respecting the safety regulations in force. We are even happier and proud to be here in Humanitas, a truly special place made up of people who give their lives for medical research and study,” Domenico Dolce said, referring to the location of the show. Set in the courtyard of the Humanitas Research Hospital, the designers staged it to raise money for the institution’s Covid-19 vaccine program. 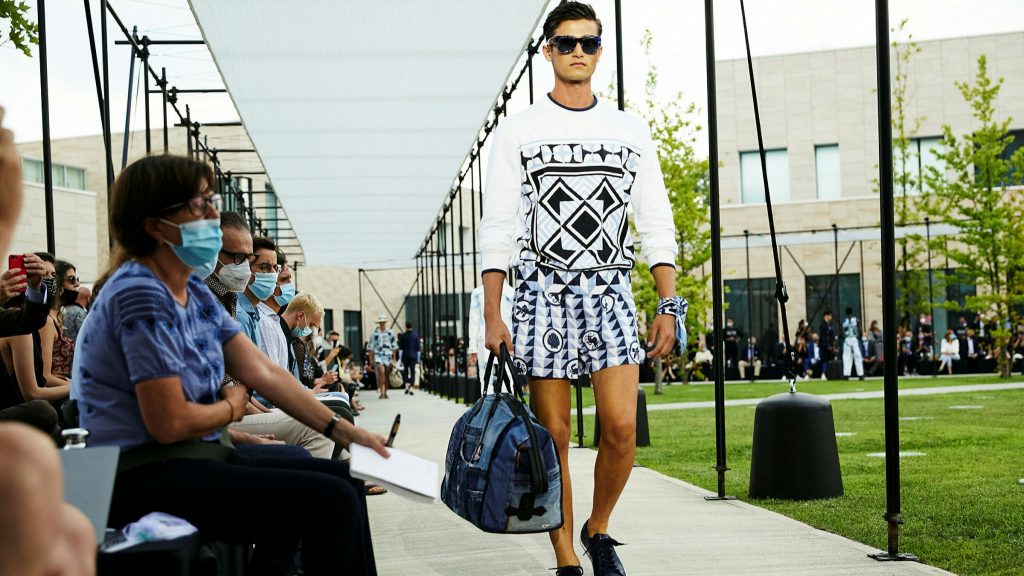 Like the Paris online events that preceded it, the presentations of Digital Milan Fashion Week unmistakably revolved around the idea of the runway, or indeed the absence of it. Whether you believe in the traditional format of fashion shows or belong to those who hanker after a new digital approach, it’s hard to deny how powerful and integral the runway is to designers and their expression. Few things can showcase the presence of a garment and its connection to a broader collection like a parade of looks wafting right by you on a runway. Except, of course, for a 50-minute documentary that shows you the painstaking process that went into making them. Perhaps Maison Margiela’s approach points towards the future needs of fashion: a little more focus on the human effort that goes into all these shows.