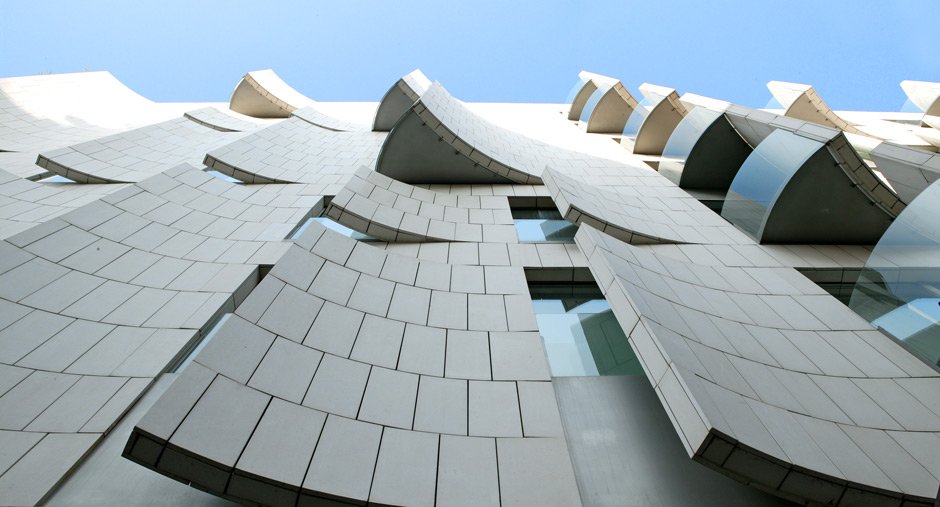 As a location, Barcelona´s Paseo de Gracia has it all. The principal street on the fashionable district of Eixample hosts the Catalan´s artery to the finer things in life. It´s luxury lineage houses everything from Burberry to Zegna, which sit alongside UNESCO quality architecture with style and finesse. Taking pride of place at the top of this classical Calle is Barcelona´s Hotel OMM – a five star laden, juxtaposed architectural statement which stands out for all the right reasons. The hotel is somewhat of a landmark for the international ´bon-viveur´ thanks to its limestone façade which comes complete with Juli Capella´s angled windows. This is a key architectural statement which brings an element of light filled, form-functionality to its surrounding urban contexts.

The concept behind Hotel OMM was passionately realised by designers Sandra Tarruella and Isabel Lopez. Their energies sought to embody all of Barcelona’s most endearing qualities and book them into a hotel. The final result is an environment which is dedicated to luxury, entertainment and fine dining; presenting an experience which is fused with modernity, innovative design and served to an appreciative international traveller. 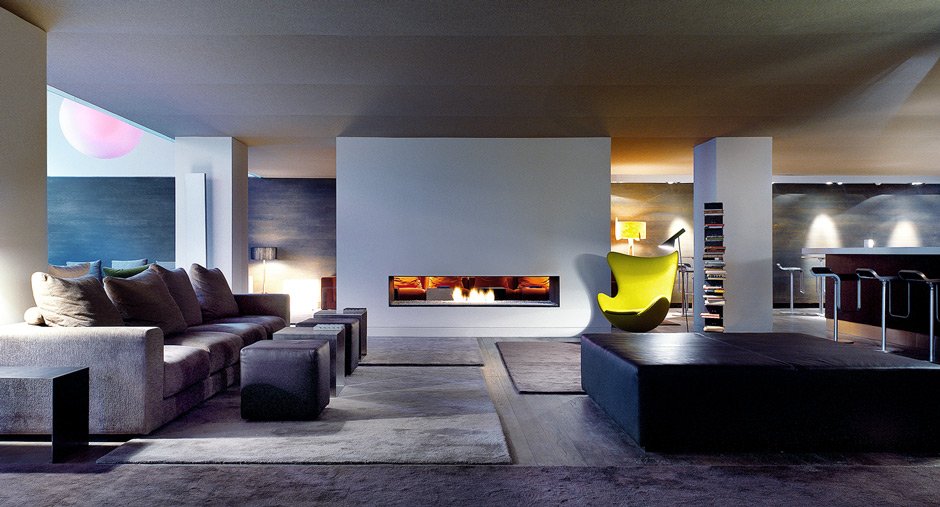 Boasting some 91 opulent bedrooms, OMM´s seduction with international quality and design doesn´t stop at the main door. The interior circulation spaces afford its visitors an effortless, yet chic utilitarian aesthetic which contrasts perfectly with the façade; one which is reminiscent of book pages blowing in the wind – each one begging to tell a story of the luxury and adventures of the bedrooms that await inside.

¨ Rosa Maria Esteva is recognised in Barcelona as the benchmark for luxury hospitality and contemporary dining experiences, traits which have seen her recognised in both Catalunya and Madrid. Hotel Omm, alongside her restaurant chain ´Grupo Tragaluz´ pays homage to her attention to quality, detail and desire to ´live with the locals´ in exquisite taste.¨ – Charles Daniel McDonald

The main entrance level serves several purposes. A feature reception desk sits next to a generous, open-plan contemporary lounge area; which them blends seamlessly into a cocktail bar, which terminates into the Michelin star Roca Moo restaurant. This Roca affiliated, world class eatery comes complete and served with contemporary art works which were individually commissioned to Rosa Maria´s daughters, both respected Catalan artists. 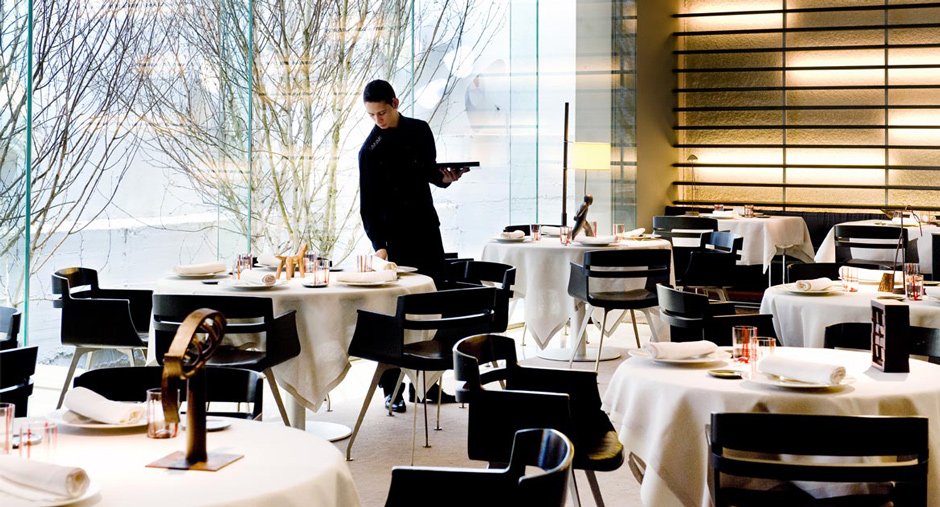 For lighter bites – the Roca Bar is located just off the lobby, in a light and open plan space where you can leisurely meet up with friends on comfortable sofas to enjoy a range of gastro-tapa plates which were formulated by head chef Alberto Garcia. This star studded menu features plates such as Iberian Ham Croquettes, steamed Brioche with Truffles, Timbal of apple and Foie with vanilla as well as the regional speciality of Veal fillet from Girona ( which alone is worth a trip to the city). If you´re not looking for sustenance, then an enviable range of tantalising teas and contemporary cocktails will help to whet your appetite for later.

As hotel lobby´s go – OMM’s is certainly a talking point. The black lined corridors weave through a myriad of levels which house some 91 rooms, creating an almost futuristic, post-dystopian world with two portals of light flooding from each end of their lengths. The transition from hallway to bedroom gives much needed light relief. Thanks to the window formations, the light flooded bedrooms provide an urban haven for rest and relaxation. The décor here is limited, but angular, with statement pieces such as four poster beds and light tables adding to the overall ´boutique´ feeling of the space – a notion which is continued into the bathrooms with their generous proportions and integral vanity units; just the thing for a weary weekend traveller. 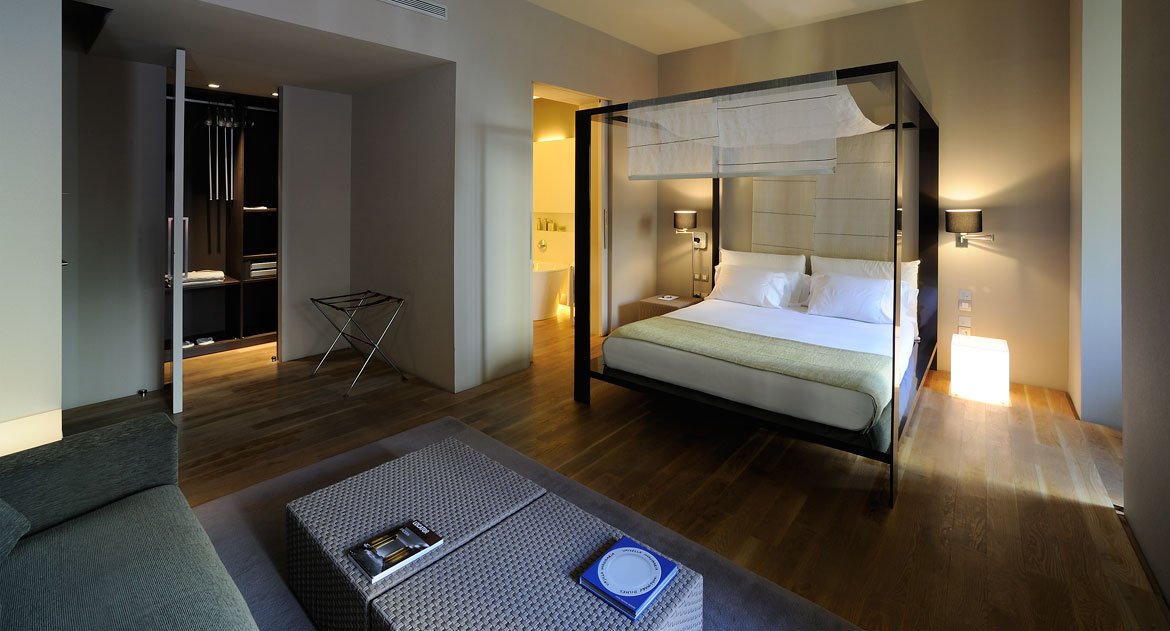 OMM hotel comes fully furnished with a luxury spa service which would satisfy even the most demanding of ´Conde-Nast´ standard travellers. The love of water and art is a running theme which is continued upstairs onto the hardwood clad rooftop terrace. This multi-purpose platform offers its guests the chance to enjoy a refreshing swim whilst overlooking the splendour´s of Gaudi´s Casa Mila, with views way up to Montjuic, making this a unique location within the centre of Barcelona.

Business guests can also take advantage of fast and efficient access to the city´s neighbouring business making this an ideal venue for business or pleasure.

If the definition of omniscient means all knowing, then its´s a safe bet to guess where the hotel got their name from.