OUR DATE WITH DIOR

Even in his earliest days of design, Monsieur Christian Dior never intended to be a rule breaker. He viewed himself as more of a passivist, as someone who always looked to the past – be it styles or values, in order to address a current thought. In the mid-century, fashion was said to be in its ´golden era´. This was an epoca of high living and high quality and there was no better place in the world to address these philosophies than the French capital. Paris played a particularly important role, post war, as it was decided by the powers that be that it would be the ´centre of good taste´ with the notion that it would inherently restore the values of pride, harmony, femininity and beauty of the post-war Parisienne parlours. This was a notion, presented in all its sweeping optimism by fashion historian Florence Muller at the entrance to Dior’s latest spectacular exhibition ´Christian Dior, Designer of Dreams´ which currently takes place in the Musee des Arts Decoratifs in Paris.

Whatever Christian Dior´s intentions were when showcased his first collection on the 12th of February 1947 are still a trade secret. His offerings were met with every conceivable emotion across all sectors of society. Enchantment quickly ran into scandal as seamlessly as the needle work on his ´New Look´ collection. Whatever his personal opinion was at the time, one thing was for certain – he had changed fashion forever. The much talked about ´New Look´ quickly fulfilled all the criteria which was imagined to restore Paris and its citizens back to the ´centre of good taste´. The new aesthetic brought with it an undiscovered Parisienne insouciance which reverberated with sumptuousness and femininity and can still be felt, even to this day. 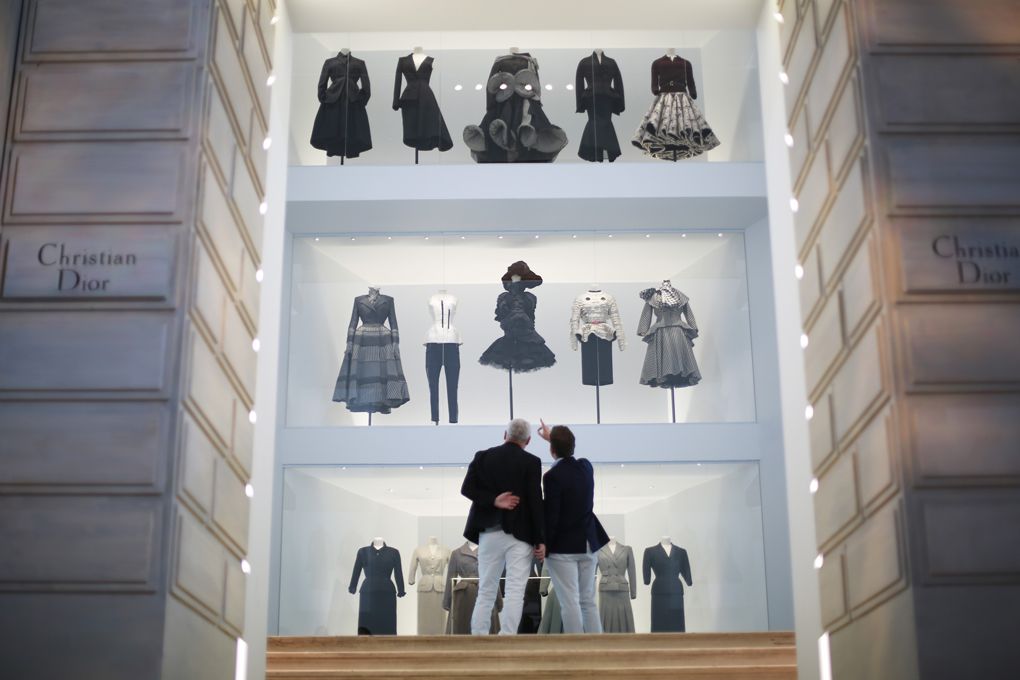 ´Dior: Designer of Dreams´ is the first retrospective of its magnitude to be held in France for the past 30 years and goes much deeper below the surface than the glitterati, paparazzi and reportage of the golden age. Certainly, the infamous house has dressed everyone from Princess Diana and Elizabeth Taylor right up to Rihanna and Jennifer Lawrence but the exhibition brings more to the table than the superficial – this time it is more about the substance. The organisation is themed and chronological; starting with the protagonists background and home surroundings before moving onto his passion for arts and culture (and to an extent – how they assisted him in developing his new silhouette). It is a story richer and more interconnected than any Haute Couture tapestry and I was all the more grateful to know this across its 32,000 square feet of fairytale and fantasy that sprawl from the fashion floor right across to the nave opposite.

¨ All the whimsical magic of Dior is united here under the imposing façades of Le Musee des Arts Decoratifs in Paris. This is more than a mere retrospective of Dior couture – it is an insight into the genius, the inspiration and the thought process of fashions most significant revolutionary.¨ – Charles Daniel McDonald

Florence Muller, the historian who co-curated the exhibition with museum director Olivier Gabet made the observation that “Fashion designers tend to be considered superficial, but in reality they have a huge sense of culture¨. The goal of the exhibition is to show the source of creation and the breadth of culture that Christian Dior and the designers who succeeded him possessed – they really explored the history of art. It’s important for the public to understand that fashion isn’t ‘easy.’ Dior and the others, made a point of bathing in culture. He understood the complexity of things, but what he loved the most was simplicity.” 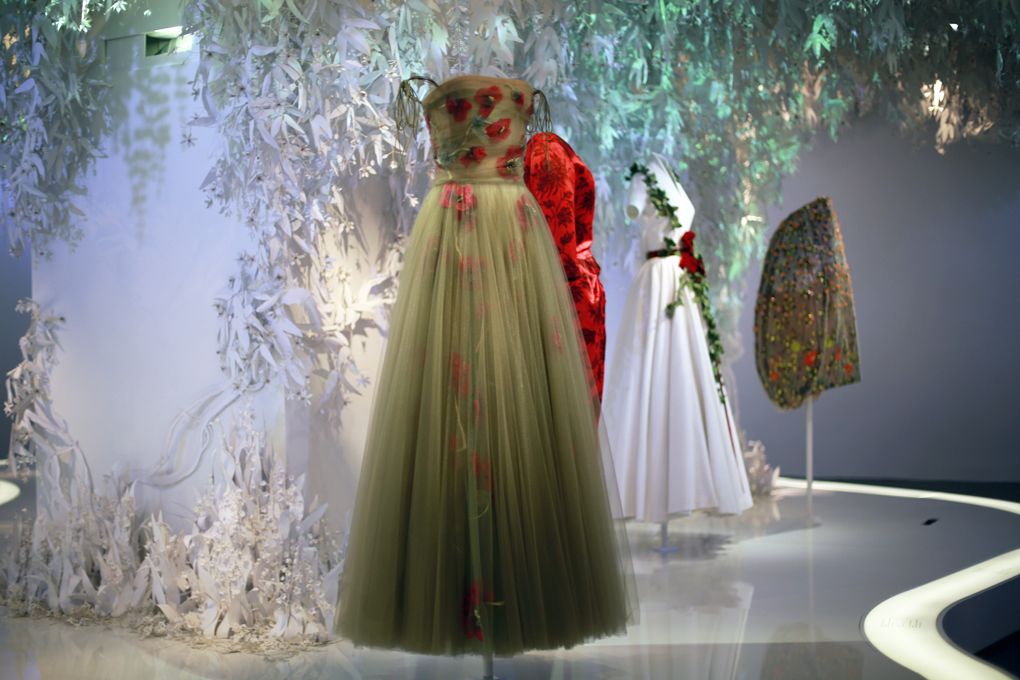 As an opening point of reference in the retrospective, we are bathed within the sands of time, which give a pre-empted omniscience over the character of Dior. Archives and treasures which are filled with documents, photographs and letters, from his younger years – many of which have never been seen before. The experience then quickly takes onto his early years in his gallery and curation premises (when he and an emerging art talent, Salvador Dali) used to scout around the local flea markets looking for Art Nouveau curiosities together. In the opening hall, we are met by a full spectrum palette of clothes with additional offerings from famed cobbler, Roger Vivier and other accessories of the day. This helps us to get a notion early on of how, some 70 years ago, Dior was looking towards nurturing and developing the 360 concept (of holistic fashion and lifestyle integration). Across the hall, we are presented with Objet d´ Art and fine paintings by the likes of Renoir and Monet which help in giving the clothes a context and indeed sense of place.

During a recent interview, Muller quoted that “Dior thought that to achieve true elegance, you have to control everything”, which is something that she clearly could relate to having spent the best part of one year editing an extensive collection down to only 500 pieces. From perfume bottle casts and toiles to the Venus evening gown, each and every detail of Dior´s heritage has been intricately and magnificently displayed. The annex gallery to the side offers a concise glimpse into each of Christian Dior´s successors in chronological order; Yves Saint Laurent, Marc Bohan, Gianfranco Ferré, John Galliano, Raf Simons, right up to the house’s current creative director for women’s collections, Maria Grazia Chiuri. 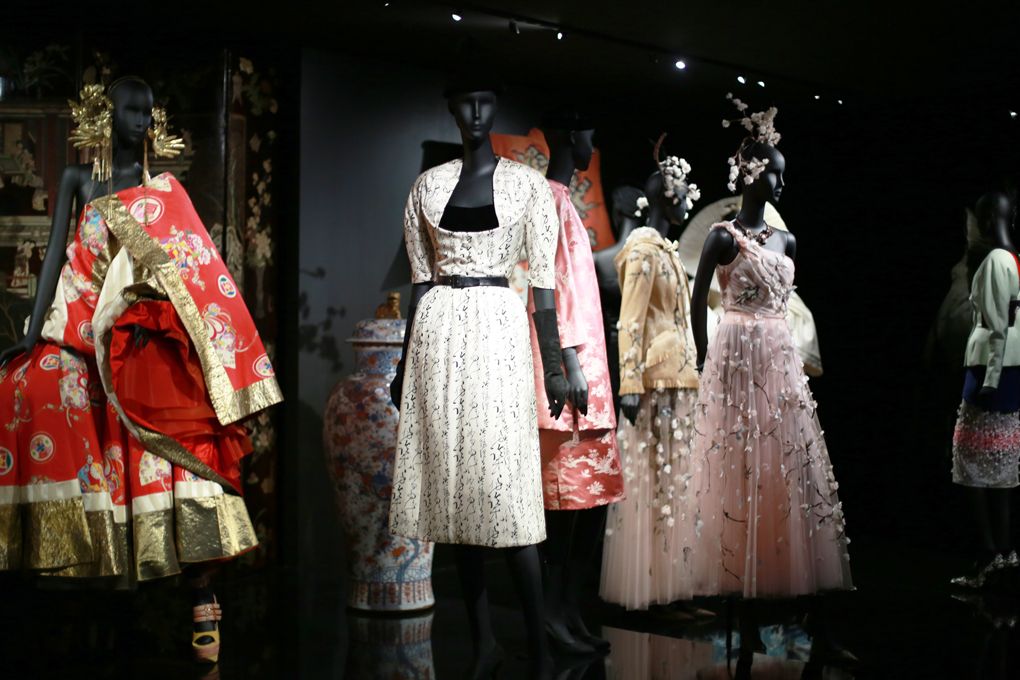 A Retrospective Of Dior´s Designers

As well as acknowledging the past, the present is also referenced to give some real-life modernity to the mix. The museums Nave section has been reconstructed to replicate the façade of the 30 Avenue Montaigne headquarters – complete with front windows brimming with Couture, which isn´t Dior. This serves as a powerful instruction as to how the New Look has influenced other designers, both French and internationally. Expect to see offerings by Alexander McQueen, Thom Browne, Alber Elbaz, Jean Paul Gaultier, Pierre Cardin, Comme des Garçons, Louis Vuitton, Yohji Yamamoto and Lucien Lelong.

The final room of the sequence is a vision in white – a dazzling and ethereal triple height space which showcases some of its many prototypes in toile, before the ´Grande Dame´; an imposing installation of gowns worn by the great and the good  of the celebrity circuit which are all kissed by an elaborate light projection which is intended to mimic the hall of mirrors in Versailles ( the scene of a recent Dior campaign by Charlize Theron) where the memories of the past and the prototypes of the present come together under an endless shower of gold. If this is the stuff that dreams are made of, then we will all rest well tonight.