In years to come, when the coronavirus is hopefully a faint memory, February 2020 will surely be looked back on as “the corona season”. Rarely has fashion found itself in the eye of the hurricane to an extent like this. Leaving Milan as a near-state of emergency set in, we got back to business in Paris amid the coughing attacks we’re used to this time a year. But, in the end, it was hard to deny: if not in our bodies, we all had corona on the brain.

Nowhere was it more evident than at Rick Owens, where sustainable plastic creations, shoulder-length gloves and a rather medical use of the colour blue were instantly reminiscent of quarantine-like facility dressing, even if it had been the last thing on the designer’s mind. (His collection was meant as a glamorous ode to Gary Numan.)

At Kenzo, we had to enter a giant see-through tunnel system erected in a city garden through one door, then wait in a small in-between room before the next door was opened – as if we were going into quarantine. “It was the idea of being in a bubble,” the brand’s new designer Felipe Oliveira Baptista said, assuring us it had “nothing to do with the actuality”. His was a more serious and mature Kenzo than we’ve been used to, more rooted in a reality that isn’t always uplifting in this day and age. “There’s a certain darkness in being optimistic today,” he said. Meanwhile, at Dries Van Noten, a cravate rouge was handing out white face masks upon arrival. Backstage, guests pumped the complimentary anti-bacterial bottle before exiting to the street.

Van Noten explained that his rich, golden textures smothered in embroideries and glowing like the colourful lights of a dance floor were his way of saying: “Enjoy, have fun, just go for it. If you think you have a lot of embroidery, put some more!” He painted a telling picture of the dark romance that defines this strange moment in time. Go out – at your own peril. Balenciaga flooded a pitch-black stadium in fluid reminiscent of petrol, submerging its first two rows of chairs in oily black poison. Above us, LED screens showed storms and smoky skies that turned burning orange, like wildfires. It felt like the apocalypse was upon us. “No, this was, for me, really a celebration of fashion, in my way, that I love. I say vive la fête,” Demna Gvasalia quipped. “I mean vive la mode, pardon! Fête is later.”

Right, then. Revelry before reckoning. “It’s really important, I think, to keep that fire about your love of clothing and fashion,” he said of his burning skies. “We live in times when we’re not allowed to kiss and hug each other, but we still need to dress. And I realise that this is what I love doing most.” As for the petrol: “We are kind of drowning in this shit so I wanted them to walk on it, to bring in this biblical cinematography. It’s part of the world we live in.” Gvasalia echoed that biblical motif in a collection of monastic silhouettes that recalled his Orthodox Christian upbringing in Georgia. And religion would become a bit of a leitmotif this Paris season, where Julien Dossena riffed on medieval references for his cultish priestesses at Paco Rabanne.

On Sunday morning, Kanye West took his Sunday Service to Paris. Staged at the Bouffes du Nord theatre, he and 100-plus singers in matching beige Yeezy outfits performed a euphoric set of religious songs in synchronised choir formations that were nothing less than mind-blowing. Even for those of us who aren’t religious, it was a soulful and optimistic break from the virtual panic mode caused by the coronavirus (and a far more enriching moment than most shows, including West’s own Yeezy spectacular the day after). On social media, some voiced their concerns about our elated reactions to an event hosted by the controversial superstar. In January, West – who may or may not be a Donald Trump supporter – hosted a Sunday Service at the Awaken 2020 prayer rally frequented by anti-LGBTQ+ fanatics. 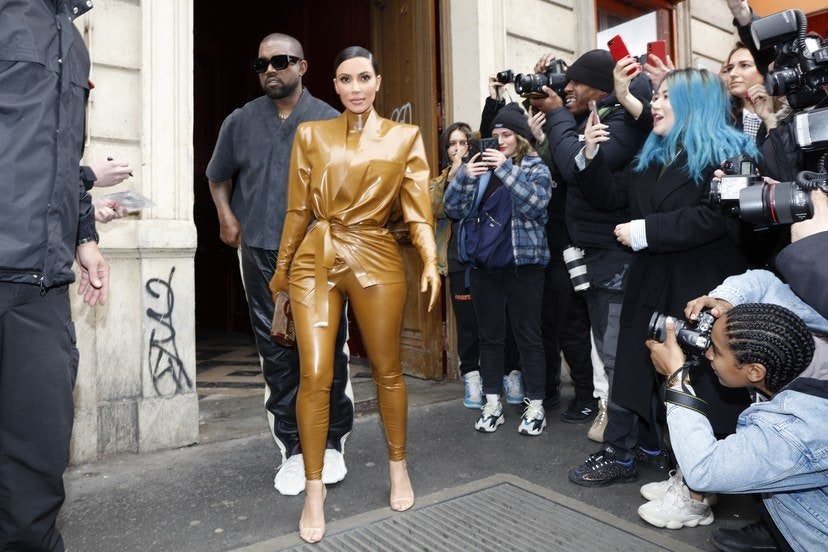 West didn’t speak at his Sunday Service in Paris, but it would certainly be a relief were he to explain the religious and political motives behind these events, which are fast turning into a kind of church. Fashion, of course, isn’t a stranger to protests, and thankfully we also saw some of the positive kind, like at Christian Dior where Maria Grazia Chiuri continued her feminist activism with massive slogans by fellow feminist Carla Lonzi suspended from the showspace’s ceiling. They included the word “consent”, a poignant touch for a show that took place the day after Harvey Weinstein was convicted of a criminal sex act in the first degree and rape in the third degree. “We’re in a time when it’s difficult to listen and to understand, so I think consent is a strong word for today,” Chiuri reflected.

Stella McCartney staged her own protest, allowing a crew of people dressed up in animal costumes to infiltrate her finale. (“What the fox?” supermodel and British Vogue contributing sustainability editor Amber Valletta captioned an Instagram story that showed her trapped behind one on the runway.) “It’s a joyous way of trying to show that, actually, these are the ingredients of everyone else’s fashion show, and we’re the only luxury fashion house in the world that isn’t killing animals on the runway,” McCartney said, flexing her new muscle as sustainability advisor for LVMH.

In the era of awareness, fashion is adapting to new values. At Valentino, Pierpaolo Piccioli “wanted to do a portrait of our time,” he said. “Everything is more fluid. It’s important not to put people in boxes. If you’re for civil rights, you’re for all civil rights. I don’t want to stand for one group more than the other.” He demonstrated those principles of freedom through a gender-nonbinary cast, which also spanned age groups and body types.

¨He dressed them in a wardrobe largely muted to black and Valentino’s trademark red, neutralising the gender-specific codes traditionally ascribed to certain colours. Then, Piccioli fused the conventional wardrobes of women’s and menswear, echoing a topic that reverberated through the shows in Milan the week before Paris. Natacha Ramsay-Levi diversified her Chloé cast with real-life friends of hers, embracing different ages, shapes and personalities.¨ – Anders Christian Madsen

Sarah Burton followed suit on the casting front at Alexander McQueen, while Chanel’s Virginie Viard had models walk the runway side by side, chatting up a storm. Her cast demonstrated subtle connections with current debates in gentle steps towards body- and age-positive casting. At Off-White, Virgil Abloh put Bella and Gigi Hadid in his show along with their mother Yolanda (her first walk down a runway in 30 years) to reflect the cross-generational dialogue that surrounds him. “‘Let’s be inclusive, let’s celebrate diversity, let’s not judge a book by its cover!’ To a young generation, you thought that’s what the world was supposed to be. And then you’re like, wait a second, if I adapt into this other form then I can go this much farther,” Abloh said, describing the dark side to which he – and the optimistic generations who adore him – don’t want to cross over.

The discourse of general values was a huge theme in Paris, as expressed in the revisited dress codes of the past. None was more prevalent than the bourgeois wardrobe, the Parisian 1970´s version of which Hedi Slimane brought to the forefront of fashion’s consciousness a year ago. He devoted this season’s Celine collection to that same ideal. If it paid homage to the Rive Gauche legacy of his mentor Yves Saint Laurent, those sensibilities had been on Anthony Vaccarello’s mind, too. At Saint Laurent, which Vaccarello took over from Slimane in 2016, he paired a bourgeois wardrobe with that of the dominatrix, effectively subverting the polite look. “I didn’t want it to be about sex, I just wanted to twist the bourgeois,” Vaccarello said.

“It was inspired by the ’90´s when, I think, Yves Saint Laurent was less interested in the streets than he was in the ’60´s and ’70´s. I wanted to twist that moment with something from now; something younger and less bourgeois and less classy.” At Lanvin, Bruno Sialelli infused his garments with the language of the bourgeoisie, saturating them with the parfum of cosmetics in a contemporary, faintly genderless sex appeal across his women’s and men’s looks, which permeated the room with a seductive air of chic. Olivier Rousteing took things a little bit further at Balmain. Wonder Boy, the documentary which follows his search for answers about his origins, inspired the Balmain designer to tackle the bourgeois wardrobe he remembered from growing up in Bordeaux – “perhaps the most bourgeois city in all of France” – in the late 1980´s and early ’90´s.

“I learned from an early age that certain classes, clubs and cliques were closed off to someone who looked like me,” he wrote in a statement, “and I spent countless hours dreaming and scheming about how I could cross over, open doors and be accepted.” For the non-French, it was an enlightening glimpse into what the broad-shouldered tailoring, equestrian trousers, thigh-high boots and foulards of that wardrobe mean in French culture. “This collection adapts those symbols of upper-class exclusion and twists them to turn the focus on a wider and no-longer closed-off world,” Rousteing noted. He called upon the faces of his childhood to back it up: Helena Christensen, Esther Cañadas, Liya Kebede, Julia Stegner, Caroline Ribeiro and Erin Wasson all walked the show.

“The French-girl attitude is fascinating to the world,” Giambattista Valli reflected before his own show, which morphed the stereotypes of Parisian femininity – “the funky, the sexy, the androgyne” – into one collection. “She’s distant, unique; she doesn’t care. She’s very personal, very secure, very free. Resolved. She doesn’t wear stockings in the winter. She’s free on sex. For me, coming from Italian culture where the women’s mentality is totally different, this is part of my culture now, too.” In a season saturated by gender discussions, political noise, and coronavirus panic mode, that blasé, unfazed, effortlessly confident bourgeois attitude felt like a nice way to face the world.

Since his Maison Margiela haute couture collection last month, which de- and reconstructed the codes of bourgeois dressing, John Galliano had been thinking about the values connected with that eternal look. In the podcast for his ready-to-wear collection, he talked about “a return to worth”: a re-awakening of the symbols of the bourgeois wardrobe and the values they represent, perhaps a more mindful and compassionate time than that of today, so affected by the First and Second World Wars. Speaking of proper values, Galliano introduced “Recicla”, a new sustainable concept under which he’ll source, re-appropriate and resell vintage finds – “handpicked by JG!” – as limited-edition garments. “There’s so many influences and so many things that inspire,” he said of his collection. “It’s a reflection of society today… If you’re in it. If you’re conscious. If you’re in the moment.”

Finally, Nicolas Ghesquière rang out the Paris shows with his own take on the season’s hot topics. The curtain in his show space within the Louvre courtyard went up to reveal a gallery of 200 actors dressed in costumes from the 15th-century until 1950. He called it “an anachrony [sic] of genres”. The characters looked on as Ghesquière presented a timeless, ageless and genderless collage of elements cut out from eras and sewed together again in a progressive patchwork of the ages. It was, he said, about “the pleasure of dressing and its many possibilities, free of protocol or constraint. Taking what we already have at home and mixing it with what we like that’s new.”