If there is one person in the world of the backstage fashion scene who needs no introduction, then it has to be fashions most sought after ´sound designer´, Michel Gaubert. A native of Paris, he has been responsible for overseeing the creative musical direction and production of top brands such as Louis Vuitton, Proenza Schouler, Valentino, Fendi, Dior, Chanel, Rodarte, Chloe, Loewe, Sacai, Acne Studios, and so the list goes on. Michel said recently that he has been (and still is) completely obsessed with music and its running order. His youth saw him make numerous record-searching pilgrimages to London when he wasn´t working in record stores in and around the centre of Paris. It was this detail of experience that led him onto deejay at Le Palace in Paris before working on the runways of fashion where he went onto shape the sounds of the runways.

¨ It started when I was a kid. I was watching TV shows with music in my room, reading all the music magazines, and listening to music all the time, and I made my world, you know what I mean? I just fell into it, I don’t know why.¨ – Michel Gaubert

Last month, the music industry’s most sought-after DJ took over Vogue magazines Apple Music channel, where he created a Paris Fashion Week playlist. We spoke to him about what the creative process of putting music to fashion means to him, how technology and smart phone apps are transforming the world of sound production and deejaying and why today, Paris shows are considered to have some of the most diverse sounds in the industry.

I got back last night from Milan, so it’s been, you know. I did too much. I had two meetings today, I went to Dior, and I went to Chloe.

Earlier this month, when we first talked about your Vogue playlist, you mentioned wanting your tracks to reflect your mood of the moment. What was the feeling when you created it?

You know, there are things I play that are more popular but you don’t need me to play Young Thug, pop music like this, so I went for things that would be more obscure, that you might only hear at a fashion show or that maybe out of context could be nice. That was the kind of mood. Also, I wanted to catch the vibe of the shows in New York and Milan. So there’s a few tracks from Fendi, Pucci, Proenza, Rodarte, Etro, Ferragamo, Adam Selman, Lacoste. A few of the shows I did in New York and Milan. And London! Some are heavy; some are not. But you don’t need a diploma to listen to them – I tried to make it user-friendly. 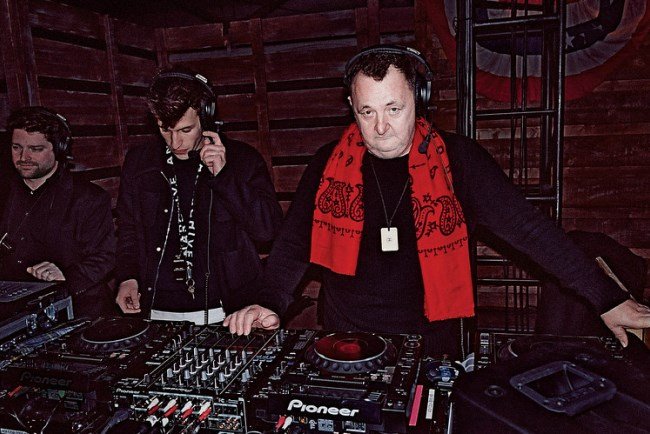 Where do you go for your personal music? Do you use your phone?

I don’t like to use my phone for music. I have a small computer, which is like a small Mac but it’s 500 gigabytes, so I call it my big iPod, you know? So I use that. And also I have a big iPad that I use for music. And doing what I do, it’s a bit complicated to manage all my music; I mean, it’s super messy. I have a list of projects that I’m working on, then I have a list of things that I want to listen to, to discover music, and then there’s a list of things I like for myself.

I suppose you have an almost infinite amount of music?

So that’s about almost seven years; yes, it´s crazy to think that!

Do you find that the way music is going with technology, it opened more doors? The fact that there’s pretty much no limit anymore to finding what you’re looking for. Do you find that helpful?

No, not really, I think in general there’s too much of everything anyway. I would call myself a curator – it’s like being a stylist and curating something, even though that word sounds pretentious. It’s not easy; there’s too much of everything. It takes a lot of time to find all the new things. Obviously you have “this is a new thing, it’s cool, it’s cool,” but there’s so much I have to listen to so I think it has become more difficult, it’s all over the place. It was more rigorous like 15 years ago, but I’m not missing that time. I have certain websites I go to, certain magazines I read, a lot of people send me music, but honestly it’s like an overload. There’s an avalanche of music.

I like the parallel with the work of a stylist, and how every day there’s more to draw inspiration from.

Exactly, at New York Fashion Week there’s almost 15 shows a day, so if you see everything, that’s a lot of clothes. Music is the same, and movies, there’s more of this, more of that, with technology, it’s a lot.

There might be like 10 albums, maybe 25 albums, that are really good throughout the year, that you can really call “good-good” albums. There’s good tracks, you know? But good albums are hard to find. I’m going to sound passe, but to me the perfect album was before the CD, it was the vinyl, which had two sides and you couldn’t put more than, maybe at the most, 40 minutes of music. And now albums are like an hour and 10, an hour and 20, which is a lot. It’s better when you do less. It’s like a collection, better to do 35 looks than 65, because how can you extend your idea, you know? Now it’s track by track. If I hear an album and it’s like 12 tracks and there are two I like or three I like, I think it’s a good album. 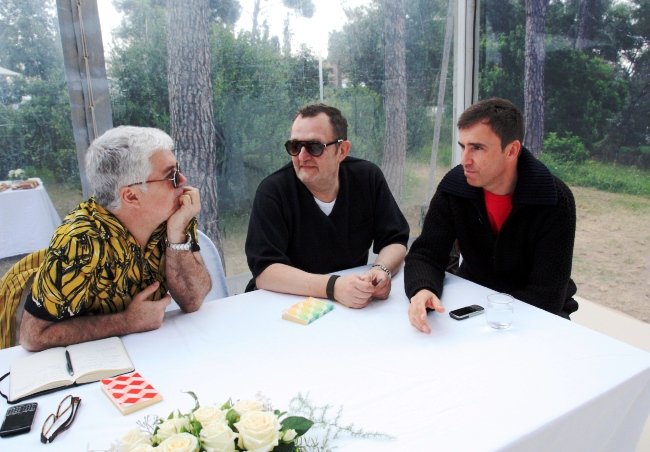 Are you drawn to one particular musical genre more than the others or is it really open for you?

It’s very open. I mean, of course when I get new projects there’s a certain genre I will go for maybe first, because of my personal taste. I’m more electronic, maybe R&B, rock less. Especially now, I think rock is not so interesting and folk is not really my thing. But you know, when it’s good, it’s really good. It’s very strange: There’s also lots of reissues, lots of old things that people are digging and so you listen to old and new things, and then you don’t make the difference between the new and old anymore. It really doesn’t matter; it’s a different way to listen to music. You approach it differently.

What have you been listening to lately for pleasure?

There’s a track called “The Feeling When You Walk Away” by Yves Tumor, I don’t know why I like that track, I think it’s cool, I like weird stuff. I don’t know how to explain what I like and why I like it.

Anything from the Parisian music scene? Do you have a connection with it?

Some of them! I like this French band called La Femme. I put it in the playlist. I like them, I think they’re cool, I like their sound and the lyrics are good. I like this song called “Septembre.”

Do you title your soundscapes? How do you come about the naming of them?

Well, the last show for Fendi I called it The Fendi Trianon because it was very 18th century. Marie Antoinette used to live in The Trianon so I called it that. I have things on Mixcloud. The men’s soundtrack was called Le Petit Prince – I always like to have names. Sometimes I just call them Code X, you know? I cannot talk about it. The next Chanel show I’m calling Code X. 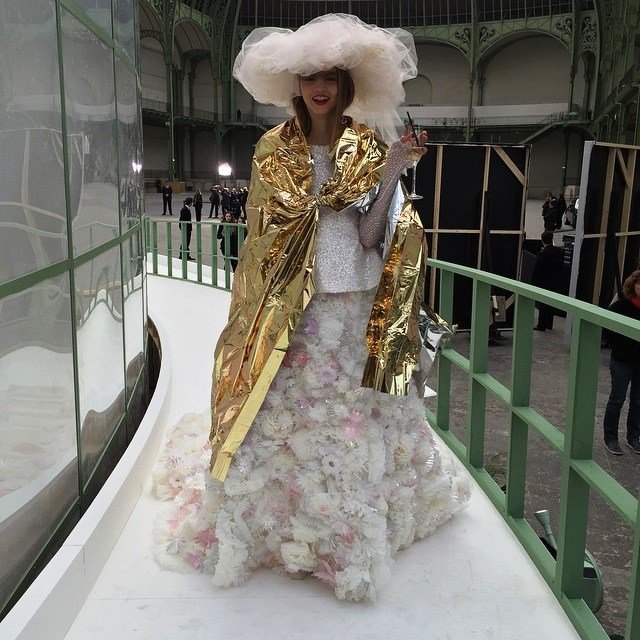 The Sound Of Luxury

What is the difference between picking music for the posts that go on your own social media or the sound design for a fashion brand?

My Instagram, you mean the sound on the little films I make? It’s whatever fits the image – you know what I mean? I’m not trying to promote my musical taste or anything I truly like. It doesn’t matter what it is, you know? It’s very accidental. I mean, usually I just try songs from my computer, to be honest. Yesterday I did three or four of them and I just used the songs that just came on.

I imagine you have an archive within yourself, but do you use technology like Shazam sometimes?

Now about your beginnings, what got you started in music?

It started when I was a kid. I was watching TV shows with music in my room, reading all the music magazines, and listening to music all the time, and I made my world, you know what I mean? I just fell into it, I don’t know why. You know? I was very receptive. My parents were listening to music, and I knew what they were listening to. I don’t know. It just came to me. I never decided, “Oh, I’m going to listen to music, I’m going to do this or do that”; it just happened. And then when I was a teen I used to go to London a lot, spending a lot of time in record stores, going to concerts. Then when I was older I worked at a record store and as a DJ at Le Palace in Paris, and then all of this happened – it just came that way. 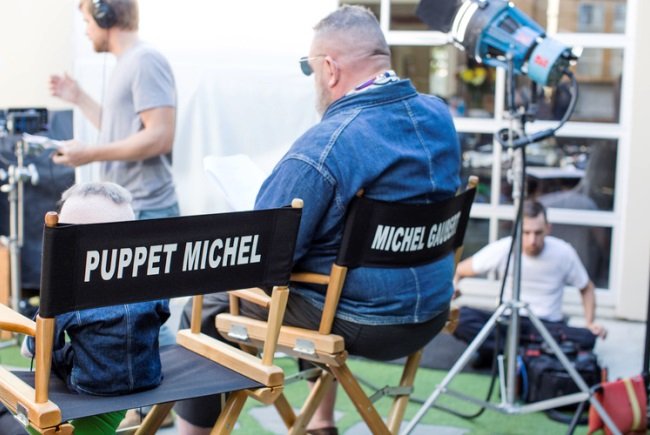 How have you changed musically over the years?

First of all, I’m not afraid. I never have the anxiety of the white page, the blank sheet, or whatever. Never afraid of looking at a project. So that’s changed. I’m less stressed about doing something. It doesn’t mean that sometimes I don’t feel very well because I don’t know where I’m going, but I know that I’m going to make it . . . so I feel more secure about it.

And also, my musical taste has changed; I’m more tolerant. The more I work with people in fashion, the more I listen to what they tell me. It’s not just “Michel Gaubert doing something for someone,” it has to be a mix of both. I listen to what they say: Sometimes they come up with strange ideas; sometimes they make sense; sometimes they don’t make sense to me. So I help them, “Okay, if you like this, which is maybe too famous or overused, maybe we should go there, there, and there.” I like that game. Listening to people is very important. I think communication is the most important.

If you could, how would you describe the sound of Paris Fashion Week?

I think it would sound very busy! A lot of people talking, singing in cafés. Paris is so varied, so many different shows, maybe I would find it a bit more unexpected than New York or Milan. Because there’ve been so many shows already, and all the cool things of the moment have been used. I think that in Paris people tend to go a different way. You know, people are less obsessed with a new hit as they used to be. I think Paris is a mix of a lot of things, multilayered, very cross-cultural. In Paris you have Belgian designers, Korean designers, Japanese designers, Spanish, Portuguese, American, French designers . . . it’s super big. And not necessarily people who live here but people who travel from their country to show their fashion because that’s where they think it belongs, so I think the soundtrack of Paris is maybe more cross-cultural than anywhere else. But that’s me seeing it that way.