From the harvesting of fabrics to supply chain and inventory management, technology is utilised across all parts of the fashion operations network. Since 1991, e-commerce has totally revolutionised shopping; with the traditional brick-and-mortar presences all competing to be the next big ´destination experience.´Back to the origin of fashion and the designers themselves have been exploring new concepts with marketing strategies such as ´straight-to-digital´ in an attempt to appease one of the biggest commerce revolutions of the decade, the ´Instagram Checkout.´

Digital content and social media are enjoying an increasing convergence with the fashion industry. You only have to look no further than the ´Frow´ celebrity influencers who all too often appear to be documenting their moment, rather than celebrating the apparel which brought them there. Nevertheless, the fashion industry has voraciously embraced technology as an active marketing gadget, which it believes can help to democraticise its actions more readily in an attempt to achieve the ´access-all-areas´thirst within todays consumer experience. This they hope, can make the worlds of the 360-degree camera, live-streaming and virtual reality an everyday ´retail´ experience and one which introduces a more meaningful and immersive component to the shopping basket.

This chronology of fashion and technology commences with Austrian designer, Helmut Lang. Two decades ago,  his was one of the first design houses to encompass the digital world by presenting his Fall/Winter´98 collection through CD-ROM and the internet. To coincide with the launch, Lang issued a press statement justifying his actions; “I sensed at the time that the internet would grow into something much bigger than imaginable, so I thought it was the right moment to challenge the norm and present the collection online.” In doing this, he was not alone in feeling a shock to the system. These actions would go on to set a new precedence for the format from which to work and gain notoriety within fashion industry; so that both peers and public alike could obtain an unfiltered view of their work.

“Even if you are still uncomfortable with the idea, you have to realise that today, technology rules the world- because it changed the world; both inside and outside of the fashion industry. The question that we need to be asking within this new decade is: How compatible is fashion with technology? My answer is very – why else then would Karl Lagerfeld have sent robots down the Chanel runway or Alexander Lee McQueen lamented the dead of Culloden in a collection terminating with an ethereal Kate Moss hologram.” – Charles Daniel McDonald

The landmark summer of 2000 saw the launch of digital style platform and e-commerce portal Style.com. Its philosophy left many design houses closed to the idea, due to factors such as rival accessibility and plagiarism. However, fast-forwarding several seasons down the line saw the vast majority of them offering ´sneak previews´ and ´behind the scenes special viewings´ in an attempt to monetise upon the publics curiosity. This global democratization also saw the birth of marketable sub-categories and new industry jargon such as ´mass-market´ and ´international luxury´- realms which continued to augment and develop well into the end of the noughties. An eruption of new wave reportage and street-style photography emerged which sat comfortably beside the new army of Vloggers (digital bloggers) and ´influencers´ who were capturing sweet moments though a rose tinted filter at the shows of in-the-know design houses such as Dolce & Gabbana and Alexander McQueen. Several decades on since its launch, statistics tell us that these rules have well and truly been broken, with fashion adapting to Instagram, in converse with its original intention.

Whilst most of these concepts and advances are happening to the environments within which fashion showcases, not much effort had been implemented to offer such technologies to the clothes themselves. Several noted critics have refereed to an emergence of ¨retro-futurism aesthetics¨, which were presented to voracious ´Cool-Hunting´ consumers in all the tones of monochrome and silver possible. Ironically,  this thought could not have been further from the truth as it is those garments which ´don´t look like fashion´that have advanced the most (taking for example, temperature-responsive active sportswear). A notable minority of designers such as Hussein Chalayan and Alexander McQueen are striking exceptions as they have proven their ability to accomplish these hybrid realities. Forget form follows function – today, it´s all about integration of style with an appreciation of functionality and application of future technologies, like these designers below have proven over the past two decades.

¨Helmut Lang sets the fashion machine in motion when he presents his fall 1998 collection via CD-ROM and the internet. (He’d do the same with his spring 2001 collection, following 9/11.)¨

¨For spring 2000 Donatella Versace showed the jungle-print dress that Jennifer Lopez wore to the 2000 Grammy Awards. The image of J.Lo in ´that dress´was so searched for, it inspired the creation of Google Images.¨

¨Up until the finale of McQueen’s fall 2006 Widows of Culloden collection, it seemed to be a celebration of Victoriana and Charles Dickens via Miss Havisham. The unforgettable hologram of Kate Moss that closed the show was very of the moment.¨

¨For spring 2007, Chalayan provided his audience with a survey of fashion history via a series of mechanically morphing dresses. Here was wearable tech hardwired with romance.¨

¨McQueen partnered with Nick Knight’s ShowStudio to create history: Plato’s Atlantis, the designer’s spring 2010 outing, was the first to be live-streamed. Further disrupting the system, motion-controlled robots on tracks filmed both the models coming down the runway and the front row, offering a real 360-degree view of a fashion show.¨

¨The front row of Dolce & Gabbana’s spring 2010 front row was filled with laptop-carrying online personalities (influencers in today’s parlance). It was a fashion moment, as was Tavi Gevinson’s appearance, in a giant bow-shaped hat at Christian Dior’s fall 2010 show, causing a journalist sitting behind her to complain about having to watch the show through said hat. The meeting of the old guard and new was not without its snags.¨

¨In the lead-up to her spring 2013 show, in which models wore Google glasses, Diane von Furstenberg recorded her preparations using the ultimately ill-fated device.¨

¨Dutch designer Iris van Herpen upended the idea of customization that is central to couture by making dresses to exact specifications using 3-D printing. For her spring 2013 collection, she applied the technology to flexible materials for the first time; she also collaborated with artist Carlos Van Camp, who conducted electricity while wearing a specially designed Van Herpen suit.¨

¨Ralph Lauren’s Polo for Women line is presented in the form of a 4-D holographic light show projected onto the spray of water spouting from the lake in Central Park.¨

¨Marc Jacobs created an immersive sound experience at his spring 2015 show with a specially designed vocal narrative that guests listened to using the Beats by Dre headsets left on seats. “The idea was to put everybody in their own world,” Jacobs said.¨

¨The ethereal finale to Richard Nicoll’s spring 2015 collection was a simple shift made of LED-operated fiber-optic fabric.¨

¨At Dolce & Gabbana’s spring show, models take selfies of themselves while walking down the runway. These images are projected onto giant screens in the venue and posted on the brand’s social media platforms.¨

¨Users who downloaded the Runway by SAP app could watch, select, and rate their favorite looks from Badgley Mischka’s fall 2018 show. By spring 2020 the app had been further enhanced to allow for shopping, simultaneous photography, and more.¨

¨Dolce & Gabbana’s fall 2018 show opens with an army of drones carrying the brand’s newest handbags that emerge from the Baroque set.¨

¨Selfie-loving Olivier Rousteing’s launches a Balmain Snapchat beauty filter that promised insta-glam. It was a fitting accessory for his very Kira-Kira collection of fall 2018.¨

¨Coperni designers Sébastien Meyer and Arnaud Vaillant go straight to Instagram with their fall 2019 collection, inviting users to interact with the lineup with a virtual experience via @copernize_your_life, modeled on the ´Choose Your Own Adventure´ books.¨

“Smash the control images. Smash the control machine. Proclaim a new era. Set up a new calendar, Nothing is true. Everything is permitted. I strive to live up to my words. Out of control.” Yang Li posted that message on his brand account in advance of his straight-to-Instagram fall 2019 collection and on those of the 27 women he asked to take selfies wearing the clothes he had sent.¨

¨Rihanna’s Savage x Fenty show, presented to a by-invitation audience who had to relinquish their cell phones at the door, is filmed to stream on Amazon Prime soon after.¨

¨The TommyNow x Zendaya fall 2019 show was not only recorded using 360-degree cameras for that true-to-life feeling, but insider access was also offered through a web-based VR (shopping) experience through tommy.com.¨

¨Rag & Bone’s Marcus Wainwright offers a multi-sensory experience for spring 2020 with modern dancers, musicians, the Brooklyn Youth Chorus, and a robot shooting video that played on LED screens during the show, which was also live-streamed on Instagram.¨

¨Wanting to capture the movement in clothes, A.F. Vandevorst and Filip Arickx asked photographer Steven Sebring to capture their fall 2019 collection with his a 360-degree camera, which creates 3D holographic fashion images. This was their way of rethinking the fashion show. “With this way of filming,” Arickx said, “we could achieve that same experience, and it’s even easy to share with people all over the world.” Zac Posen, aiming for a balletic effect, worked with Sebring on his final collection, for spring 2020.¨

¨In Copenhagen, the fall 2020 season opens with Carcel’s statement-making non-show. There were rows of chairs and a video, but no clothes and no models.¨ 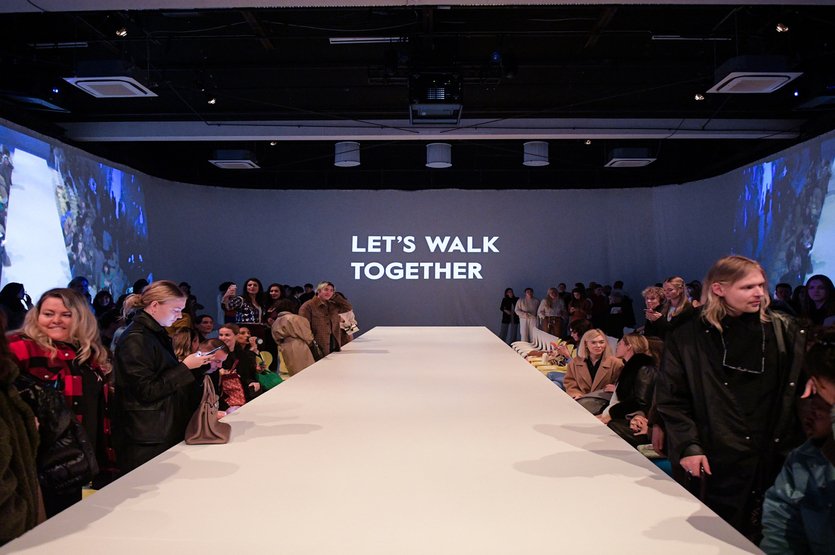 ¨We “asked everyone to step up to the runway to change the industry together, abandon broken systems, and create a new vision for fashion in society,” brand founder Veronica D’Souza announced on Instagram.¨

With all this in mind, can you even begin to imagine what the decade of 2020 has in store for us all? Whatever it is, let´s hope it doesn´t go ´viral.´