THE HISTORY OF FAST FASHION 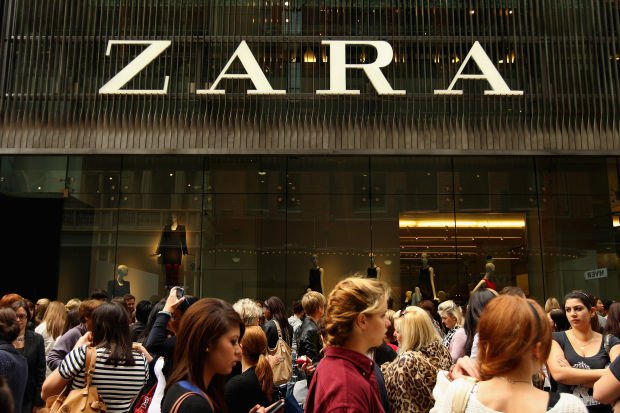 Whether you love or hate fashion, one thing is for certain – the advent of ´fast fashion´ has totally changed how and where consumers make purchases. But, have you ever considered how it all started?

The idea of fast fashion is globally regarded as being a fairly new concept that started life within multi-national brands such as Zara (Inditex). Because they were able to manufacture trends at incredible speeds for affordable prices, the term fast fashion today can be defined as ¨a constantly evolving production system that has been gaining momentum since the 1800´s¨. 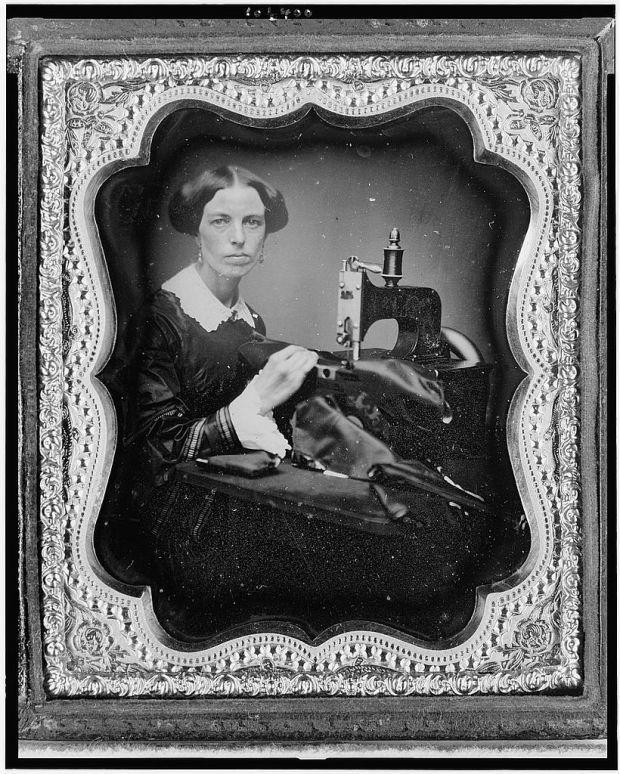 How It All Began

Before the 1800´s, most people relied on raising sheep to get wool to spin yarn to weave cloth to make the clothes. The cycle of fashion finally picked up speed during the Industrial Revolution, which introduced new textile machines, factories and ready-made clothing, or clothing that is made in bulk in a range of sizes rather than being made to order. First patented in 1846, the sewing machine contributed to an extremely rapid fall in the price of clothing and an enormous increase in the scale of clothing manufacturing.

Outside of couture houses, localized dressmaking businesses were responsible for making clothing for middle-class women, while women of lower incomes continued to make their own clothing. Local dressmaking businesses typically included a team of workroom employees, although some aspects of production were outsourced to “sweaters,” or people who worked from home for very low wages. Although these types of operations were mostly localized, the practice of using “sweaters” in the 1800´s provides a small glimpse of what would eventually become the basis of most modern clothing production. 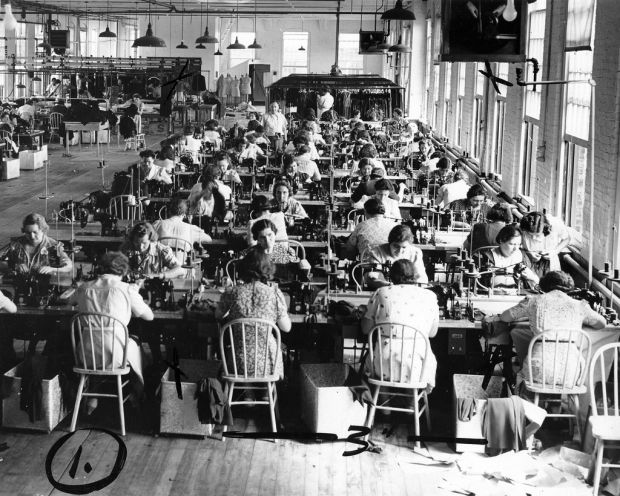 The Advent Of Mass Manufacturing

Despite the increasing number of garment factories and sewing innovations, a great deal of clothing production was still done in the home or in small workshops throughout the beginning of the 20th century. The fabric restrictions and more functional styles that were made necessary by World War II led to an increase in standardized production for all clothing. After becoming accustomed to such standardization, middle-class consumers became more receptive to the value of purchasing mass-produced clothing after the war.

However, it’s important to remember that not everything about innovation is good. On March 25, 1911, a fire broke out in New York’s Triangle Shirtwaist Factory, which claimed the lives of 146 garment workers, many of whom were young, female immigrants. This also brings to mind recent examples such as the 2012 fire at the Tazreen Fashion factory in Bangladesh that killed at least 117 people, proving that history often does repeat itself. 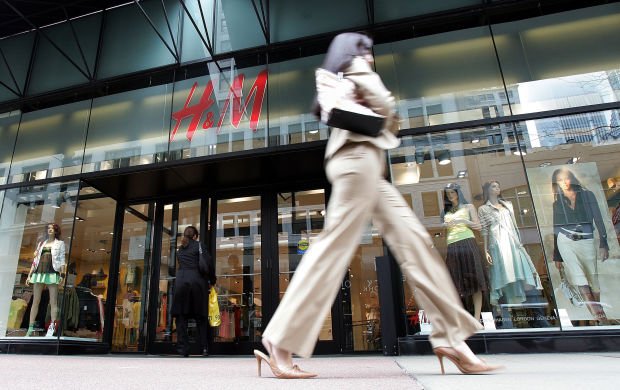 If you’ve ever wondered when fashion trends began moving at a dizzying speed, it was the 1960´s, as young people embraced cheaply made clothing to follow these new trends and reject the sartorial traditions of older generations. Soon, fashion brands had to find ways to keep up with this increasing demand for affordable clothing, leading to massive textile mills opening across the developing world, which allowed the U.S. and European companies to save millions of dollars by outsourcing their labour.

But, who became the first true “fast fashion” retailer? The answer is not very clear, as many of the companies that we know as leaders in the industry today, including Zara, H&M, TopShop and Primark, started as smaller shops in Europe around the mid-twentieth century. They all focused on affordable trendy clothing, eventually expanded around Europe, and infiltrated the American market sometime in the 1990´s or 2000´s. Although each brand emphasizes their humble beginnings and meteoric rises, it’s hard to determine who influenced whom. The rapid growth that defines these brands today goes hand-in-hand with cost-cutting measures, and not many companies are eager to celebrate or detail the controversial switch to overseas sweatshop labour.

Technically, H&M is the longest running of these retailers, having opened as Hennes in Sweden in 1947, expanding to London in 1976 and eventually reaching the states in 2000. According to the New York Times, founder Erling Persson drew inspiration for his store from visiting high-volume retail establishments in the U.S. after WWII.

Zara founder Amancio Ortega opened his first store in Northern Spain in 1975, supposedly using the same principle that it follows today: make speed the driving force. When Zara came to New York at the beginning of 1990, the New York Times used the term “fast fashion” to describe the store’s mission, declaring that it would only take 15 days for a garment to go from a designer’s brain to being sold on the racks.

¨ Fashion, especially throw-away fast fashion is moving at a rate which is no longer sustainable. If you want to buy effectively – buy less, but buy well. Invest in quality, which will outlast these faster manufactured items by an average of three times. ¨ – Charles Daniel McDonald

Before the arrival of these global retail giants, American consumers on the hunt for clothing that was trendy-yet-affordable had to go to the mall and shop at trend-driven teen stores such as Wet Seal, Express and American Eagle. Although these can be seen as the American precursors to the fast fashion empire, these mall stores were unable to churn out new clothing trends nearly as fast as what we’ve come to expect these days. The inability to keep stores stocked with a huge variety of new merchandise in the span of weeks has led to their rapid demise. However, America is also home to one of the fastest growing fast fashion retailers, Forever 21, which opened as a small shop in Los Angeles back in 1984.

Although it is difficult to pinpoint the origins of fast fashion as we know it today, it’s easy to understand how the phenomenon caught on. In the late 1990´s and early 2000´s, it became increasingly more acceptable (and desirable) to flaunt one’s love for low-cost fashion, and seen as especially savvy to be able to mix high and low fashion with aplomb. When the first H&M location in the U.S. opened in April 2000, the New York Times wrote that the retailer had arrived at the right time as consumers had just recently become more likely to hunt for bargains and dismiss department stores, stating that it was now “chic to pay less.”

Fast fashion brands recently received a high profile co-sign, as leading ladies Kate Middleton and Michelle Obama have been spotted in dresses from retailers like Zara and H&M. The embrace of “disposable fashion” by such prominent women would have been unheard of just a few decades ago, but speaks to the “democratization of fashion” enabled by mass production, allowing more people to communicate through clothing regardless of their social and economic backgrounds. 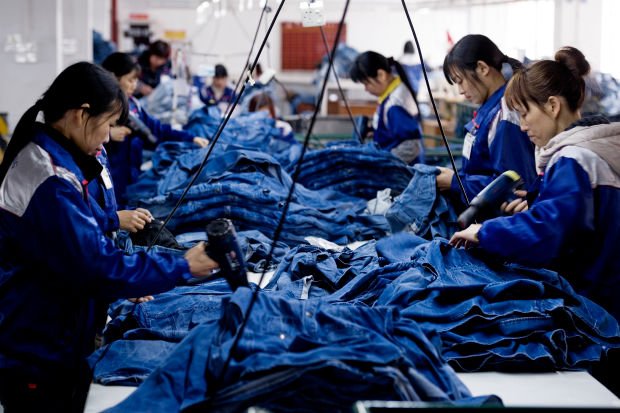 Considering the long path from spinning one’s own yarn to globalized production, it seems amazing that we now live in an age when you can buy a garment on your phone just moments after it first walked down the runway.

Of course, we must also acknowledge that there are major problems with our current fashion system, such as unjust labour practices and catastrophic amounts of waste. In an industry that has historically been focused on moving faster, it’s time to consider slowing down, at least enough to be more mindful of the purchases that we make. Thankfully, that doesn’t mean that we have to go back to making our own clothes from scratch anytime soon.