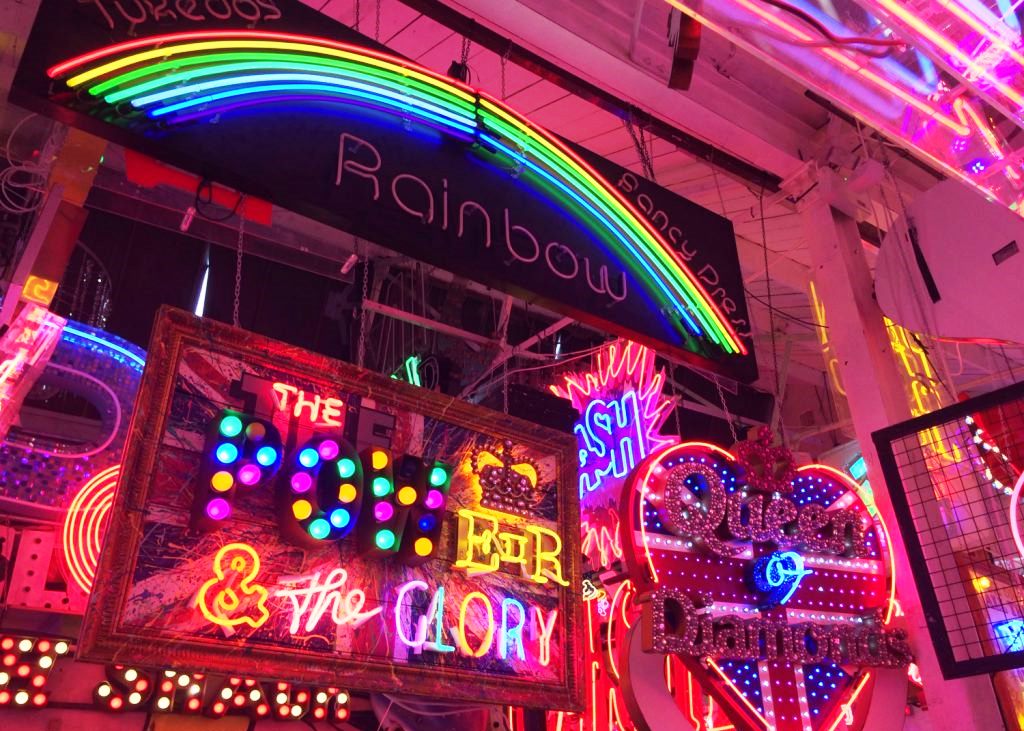 If East 17 means nothing more to you than embarrassing moments of pop culture from your heady 90’s nights out, then ask yourself to reconsider the alternative. This geographical postal location on London’s ever expanding map is home to an enigmatically entitled salvage operation called ‘Gods Own Junkyard’. Far from being some sort of neo-heavenly bolt-hole for the religiously dispossessed, it actually turns out to be a rather interesting cross-over between an abandoned film set and a retro boutique heaven, in a 70’s Kings Road Chic sort of style.

Maybe, just maybe, some press were doing the intramural a disservice. The sheer volume of visually captivating images and morphus neon curves is a veritable cornucopia of pleasure to the eye and reminiscent of Blackpool  Illuminations on speed. This is by no means an opposition; it is just such a pleasurable experience being visually violated by such an association with the classic interpretations of technologies gone by. The whole establishment is not just homage to the fading glories of the American and Western dream per se, it’s a creative free entry wonderland worthy of anything that Banksy could create, even in his wildest dreams. 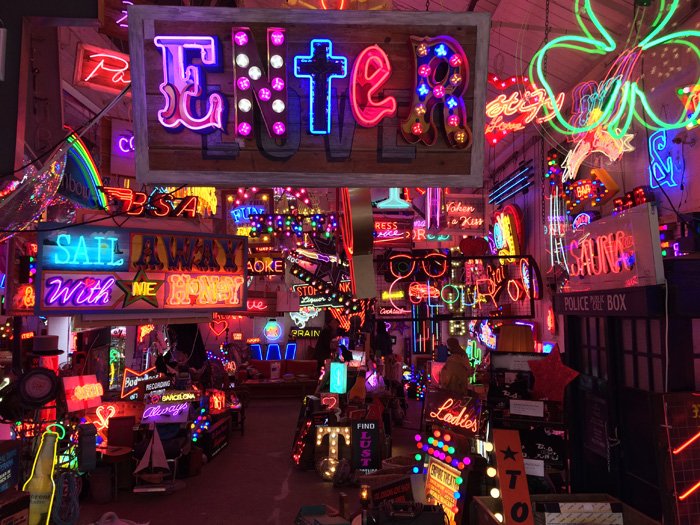 Chris Bracey was the original guardian of this eye-popping pleasure palace. He spent more decades than he cares to remember salvaging and creating used and new neon signs for the great and the good (including installation works for films such as ‘Charlie And The Chocolate Factory ‘ and Batman sequel, Gotham City) alongside numerous other sets that had been comprised of reclaimed neon signs, salvaged and found items, Circus adverts, movie props and displays. If you think of the original Steed and Mrs Peel from the 1960’s Avengers set then you won’t be too far from the truth of this best kept pseudo-industrial secret, as Vogue discovered in October 2011 when they ran a cover and photoshoot here.

¨What warehouse wouldn’t kill for its own giant stiletto, a full size Dr. Who Tardis and a dog eating shark greeting you upon arrival?¨ – Charles Daniel McDonald

Indeed, the whole warehouse area permeates a magical grotto like fantasy for adults and this has led to Bracey having established a cult following in England and the spiritual home of the Neon sign, the United States. L.E.D. and Neon tubing rub shoulders intimately across the site to envelop the visitor and trigger memories of times gone by with a comfortable, nostalgic reassurance and thus creating a childlike wonder that is a sight to behold. 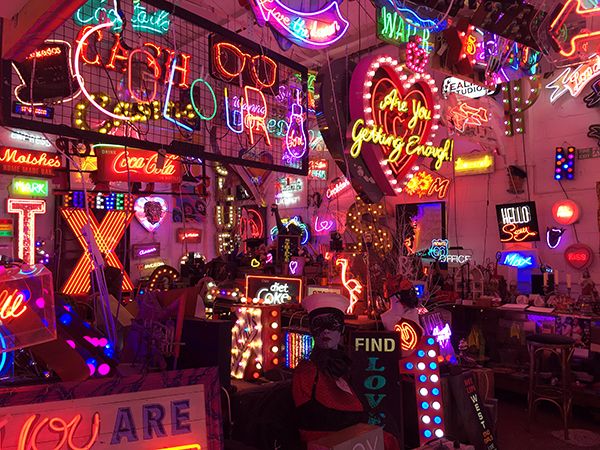 Bracey’s loyalty to his craft is admirable and he claims never to have seen a neon tube that he didn´t like. His craft came from a family of local sign-makers who have been around for many years creating signs for movie sets, Soho establishments, fairgrounds and shop fronts to name but a few. With all this in mind, the noun ‘Junkyard’ is too cruel a term, so its presumed to be aimed as simply that of a parody thanks to its profusion of ethereal electrodes. The site can be best described as ‘eclectic’ with restored signage and custom art projects that are light themed. What warehouse wouldn’t kill for its own giant stiletto, a full size Dr. Who Tardis and a dog eating shark greeting you upon arrival?

¨The sheer volume of visually captivating images and morphus neon curves is a veritable cornucopia of pleasure to the eye and reminiscent of the Blackpool Illuminations on speed.¨ – Charles Daniel McDonald

Looking for a 250 kg Glitter Ball? No problem! What about a hand made bulb for your own personal bit of illuminated heaven? That’s easy too! The most lovingly crafted objects from the perceived ridiculous to the sublime are catered for by Chris and his talented son Marcus, alongside long-standing assistant John. Between them and their combined knowledge and skill, it´s quite easy to navigate the site and learn the history of this ingeniously illuminated world of wonders at the same time. In best glitzy fairground flashing bulb traditions, it’s the greatest free show in town. 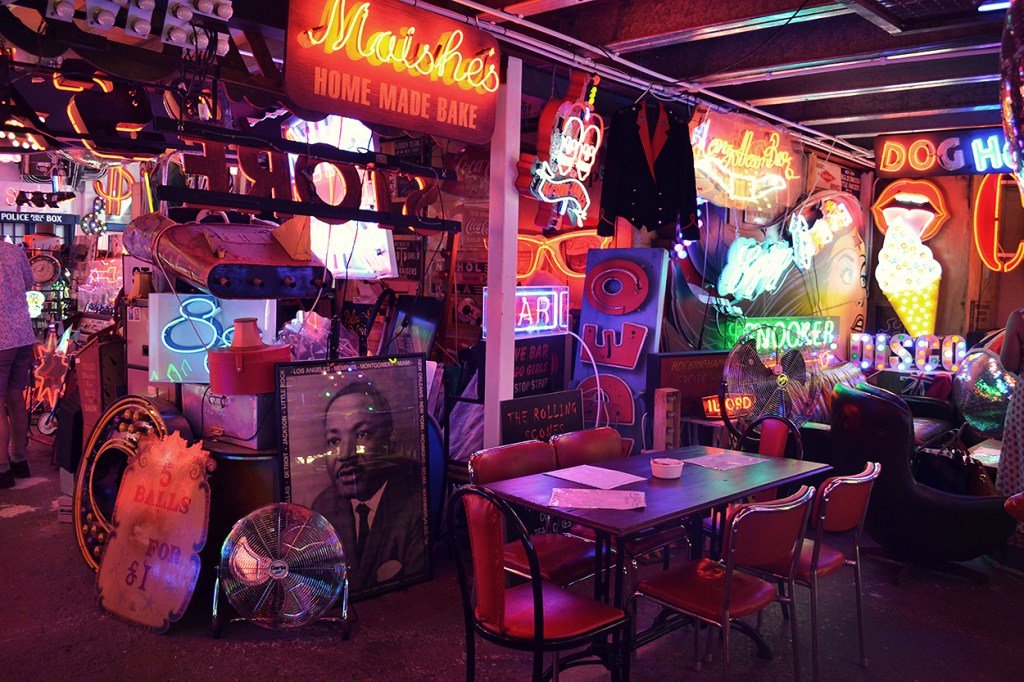 Recharge Your Batteries At The Rolling Scones Cafe

As you would expect with such iconic items, purchase does not come cheap – but if you’re looking for something exotic to hire, buy or just looking to refurbish your fathers Elvis sign, then this is definitely the place for you. All this said though, you can come away with a classic and unique item for as little as a few hundred pounds. And, if you find yourself having to recover from the prices then you can relax with a coffee or something stronger in the superbly named café ‘The Rolling Scones’. Just pray that you can find a spare socket to charge your phone in.