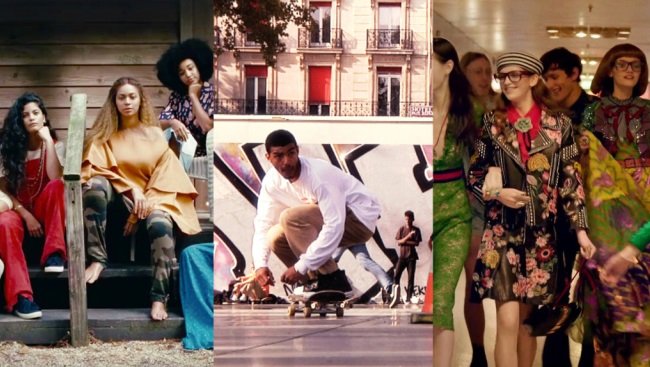 Saturday night saw the premiere of Beyoncé’s ´Lemonade´ on America´s HBO channel. The performance shortly after, was displayed on Tidal and iTunes. Mrs Carter´s latest offering is visually decadent with its glowing observation of marital discord and the predicament of black women in America today. The high octane glamour, hour long ´visual album´ plays visual host to many design houses such as Roberto Cavalli, Gucci and Hood By Air. It is also an impressive example of the increasing trend for the fusion of fashion with digital film and music.

Industry sources at Cisco predict that by 2019, 80 percent of all consumer based internet traffic will be composed of online video and streaming media. However, many critics say that this is an organic growth which is desperately welcomed after a decade or so of struggling to fulfill the potential capability of the medium. Drawbacks from a range of issues such as poor content and distribution strategies alongside budgetary constraints and disproportionate spending (in favour of more traditional routes such as print advertising) had historically made this medium a poor option.

However, as can be seen from multi-national companies such as Burberry and iconic fashion critiques such as ASVOFF´s Diane Pernet, fashion film today has some seriously great potential. Beyoncé’s conceptualisation for ‘Lemonade’ is allowing fashion to be portrayed with far more flair than any of the promotional films that have been produced by top fashion brands and this will no doubt result in a wide-spread industry wide wake up call.

Last year, Burberry´s CEO Christopher Bailey spoke out about how the internet is rewiring media and allowing for greater multi-tasking. “We are now as much a media-content company as we are a design company.” However too many fashion houses still devise online videos that feel more like a compulsary marketing aid rather than an engaging and interactive brand awareness experience.

Many lessons can be learned from good fashion film with one clear example being the footage from Supreme, which features in my top film of this season. “Pussygangster” is a skate video directed by longstanding contributor William Strobeck to correspond with the grand opening of their first Paris boutique in April. Shot in Place de la République, which is one of Paris´s most sizable skate spots, the ten minute film features skaters such as Sage Elsesser, Sean Pablo and Ben Kadow. Critiques have hailed this as a success story because it feels more like an authentic, standalone piece of footage rather than a poorly executed three dimensional marketing exercise.

Slowly but surely, all the top players in fashion are taking notice of the potential of film. Brands such as Calvin Klein, Gucci and Kenzo are refining their digital strategies and this season, Louis Vuitton and Adidas have presented some vibrant viewing that is helping to re-write their creative direction. However, with regards to using ´Lemonade´ to set a future precedence, the digital video stakes are tremendous and fashion brands still have a lot of rules to learn.

1. “Pussygangster” By William Strobeck For Supreme

¨Last month, Supreme released its latest skate video, a 10-minute short directed by longstanding collaborator William Strobeck to support the launch of the brand’s first Paris store. Shot on the city’s Place de la République, a well-known local skate spot, the film is a gritty and honest portrait of urban youth, featuring Supreme riders like Sage Elsesser, Sean Pablo and Ben Kadow, as well as skate icons Jason Dill and Mark Gonzales. With its grainy aesthetic and shaky cinematography, the film stands out for its energy and authenticity.¨ – Supreme

¨In 1994, Calvin Klein released a controversial campaign for its CK One fragrance. Shot by Steven Meisel, the spot presented an indelible image of adolescent sexuality, featuring a 20-year-old Kate Moss and newcomer Jenny Shimzu. Two decades later, the brand has successfully updated the approach for the youth of today with a Spring/Summer 2016 video campaign directed by Tyrone LeBon and featuring a cast that includes Justin Bieber, Kendall Jenner, Kendrick Lamar, Abbey Lee Kershaw and FKA Twigs, all stripped to their underwear.¨ – Calvin Klein

¨For Gucci’s Spring/Summer campaign, creative director Alessandro Michele teamed up with photographer Glen Luchford for a third consecutive season. Set to Q Lazzarus’ “Goodbye Horses” and shot in Berlin at the notorious Bahnhof Zoo station and on the rooftop of the Maritim Hotel, the resulting video depicts a collective of bohemian peacocks joyously fleeing the local police with clear references to Uli Edel’s controversial 1981 film Christiane F.¨ – Gucci

¨To celebrate the launch of its new scent, the iconic Italian brand Dolce & Gabbana united three titans of Italian cinema: director Giuseppe Tornatore, composer Ennio Morricone and actress Sophia Loren. With a rich, sun-drenched palette and sweeping cinematographic style, the film centres around a matriarch, played by Loren, as she directs the restoration of a sprawling Sicilian estate, Villa Valguarnera di Bagheria near Palermo. Scenes of Loren, rolling up her sleeves and cheerfully playing chief builder, bring a lighthearted sense of humour to the film.¨ – Dolce & Gabbana

5. “Open Up” By Christelle De Castro For Nicopanda

¨Nicopanda’s Spring/Summer 2016 video pits good kids and rebels against each other in an epic gender-bending vogueing battle. Created by New York-based director Christelle de Castro in partnership with SHOWstudio and Machine-A, the film features Jonte’ Moaning, Mela Murder, Kaner Flex, Richard Kennedy and others, dancing to a soundtrack created by Michael Magnan and JX Cannon.¨ – Nicopanda

6. “Your Future Is Not Mine” By Terence Neale For Adidas

¨With a clear message of individuality and empowerment, this short film by Adidas, directed by Terence Neale, follows some of today’s most influential pop culture figures, artists and content creators, including stylist-entrepreneur Luka Sabbat (named the Internet’s coolest teenager) and Cleveland Cavaliers basketball player Iman Shumpert, as they chart their own path through a haunting landscape of gang violence, social media clones and soulless nine-to-five jobs.¨ – Adidas

7. “Snowbird” By Sean Baker For Kenzo

¨Over the last few seasons, Kenzo has become more and more adventurous with its fashion films. This time around, the brand joined forces with acclaimed writer and director Sean Baker to create “Snowbird.” The 12-minute short, filmed entirely on an iPhone, depicts a young woman named Theo — played by Abbey Lee Kershaw — in her quest to share a homemade cake with the residents of debris-scattered desert community. Shot in Slab City, a remote campsite in the Sonoran Desert, 156 miles northeast of San Diego, the film’s raw and exotic landscape is matched by Kenzo’s free-spirited Spring/Summer 2016 collection.¨ – Kenzo

¨Louis Vuitton zooms through five generations of the brand’s history in a one and half minute short titled “The Never Ending Story from Louis Vuitton,” which has racked up over 10 million views. With art direction reminiscent of Wes Anderson, the film brings a sense of fun and millennial-friendliness to its educational narrative.¨ – Louis Vuitton

¨This February, Maksim Bashkaev, co-founder and designer of Russian fashion brand Outlaw Moscow, won SHOWstudio’s first-ever award for best fashion film with a short called “Outlaw!” The video follows Russian youths as they explore urban Moscow, as they fight isolation by standing out from the crowd.¨ – Outlaw Moscow