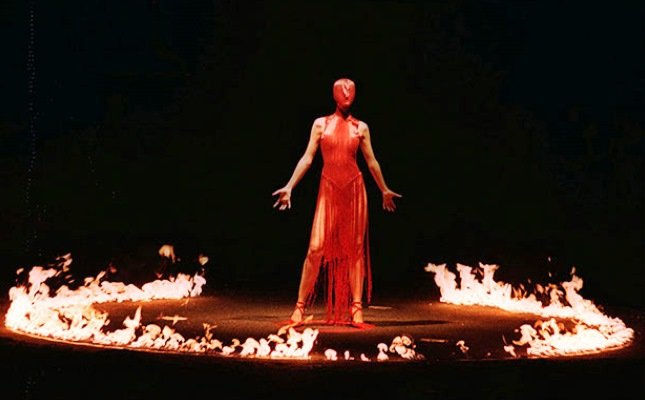 Coinciding with the Victoria & Albert’s own Alexander McQueen exhibition ´Savage Beauty´, WAR PAINT: Alexander McQueen and Make-up delves further into the inspirations behind McQueen’s visions and explores the artistry of his make-up thanks to the vision of Fashion Space Gallery curator, Polona Dolzan.

This satellite exhibition from the London College of Fashion allows visitors to delve deeper into the inspiration behind the theatre of a McQueen catwalk, and examine the key beauty looks developed by McQueen’s most trusted make-up artists. On display is the work of internationally renown artists who worked with McQueen: including Val Garland, Peter Philips, Topolino and Sharon Dowsett to name a few.

This exhibition focuses on Alexander McQueen’s catwalk make-up and coincides with the major retrospective of his work, Alexander McQueen: Savage Beauty at the V&A. It aims to unravel the process and inspirations behind his collections by exploring the key looks developed by McQueen’s most trusted make-up artists – Polona Dolzan

The most inflential 22 looks from 13 collections are being exhibited and have been grouped into three central themes: Amplified, where facial features are obscured and exaggerated, Deviated, where make-up goes beyond the traditional areas and covers other parts of the body and Stripped, where the subtle look intensifies the meaning of the collection. The looks on display range from La Poupee (1997) collection up until McQueen’s very last: Plato’s Atlantis (2010). Also showcased are silicone masks, which have been created in collaboration with London College of Fashion BA Hair, Make-Up and Prosthetics for Performance students.

Those with a craving for McQueen’s technological innovations will be impressed by the way the exhibition digitally explores the McQueen make-up. Working with digital creative studio Holiton, a 3D installation reimagines the moments of make-up evolution during McQueen shows, such as in Untitled (1998) and What A Merry Go Round (2001). Visitors will also be able to see themselves in select McQueen make-up looks through Holiton’s specially created app, ‘FACE’.

Below, a series of ´templates´ with rationalisations bring this exhibition to life and allow a connection to be appreciated between the concepts of clothing and make-up.

Alexander McQueen was preoccupied with very pale skin. Val Garland experimented with various brands and products, none of which were in mainstream use at the time, to highlight the skin, making it look like porcelain. Inspired by the work of photographer Joel Peter Witkin, Voss exposed the audience to a two-way mirrored cube, inside resembling a padded cell in an asylum.

The collection celebrated nature, using razor clams, mussels and oyster shells. Some of the garments were almost destroyed during the course of the show as a resuly of their fragility. This vulnerability was extended into the way make-up was used. To elevate the face, Val Garland used tape to stretch the models´ features, creating an unfamiliar and unnerving appearance. 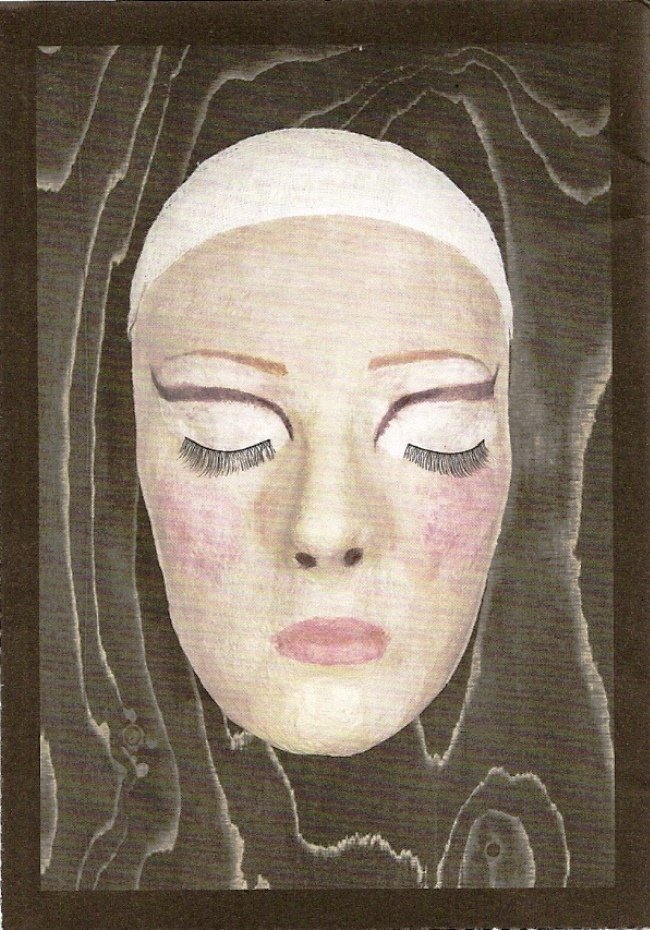 This make-up was more real than in any other McQueen show before or since. The models were not powdered down but were sprayed with water. Their eyelids were coloured in different, bright, macaron type pastels and pastel washes, which hinted at the outfits. The models appeared dewier and sweatier as the show progressed, achieved by patting cream on their skin to pick up the shine.

This collection was inspired by the Sydney Pollack film They Shoot Horses, Don’t They? (1969) a depression era drama featuring a dance marathon competition. It was choreographed as a modern-day endurance test by Michael Clark, the well-known contemporary dancer, who paired the models with professional performers, displaying the garments in motion. 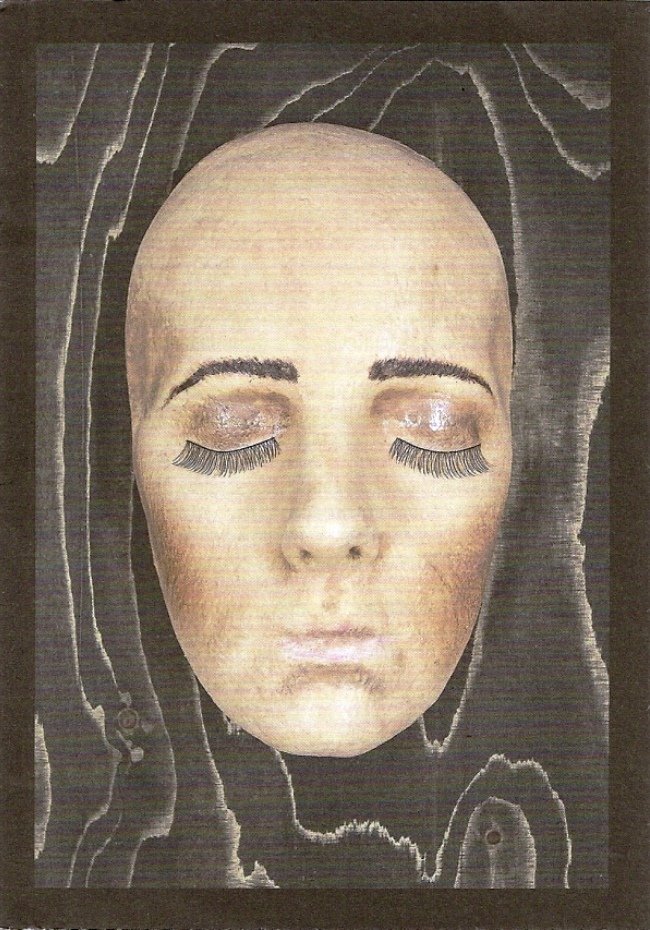 Alexander McQueen wanted to give the impression of fragility through this ghostly pale look. The models’ faces were heavily doused with powder, giving an ethereal, decaying appearance. Not apparent here is that powder was applied far along the neckline and down to the chest in visible brushstrokes, then robustly stopping to reveal natural fleshtone.

This collection exaggerated the Edwardian hourglass silhouette, taking inspiration from the  opulence of Marchesa Casati, an eccentric turn of the century Italian heiress. McQueen was also referencing the Stanley Kubrick film Barry Lyndon (1975), set in eighteenth century England, in which the hero is obsessed with nobility. 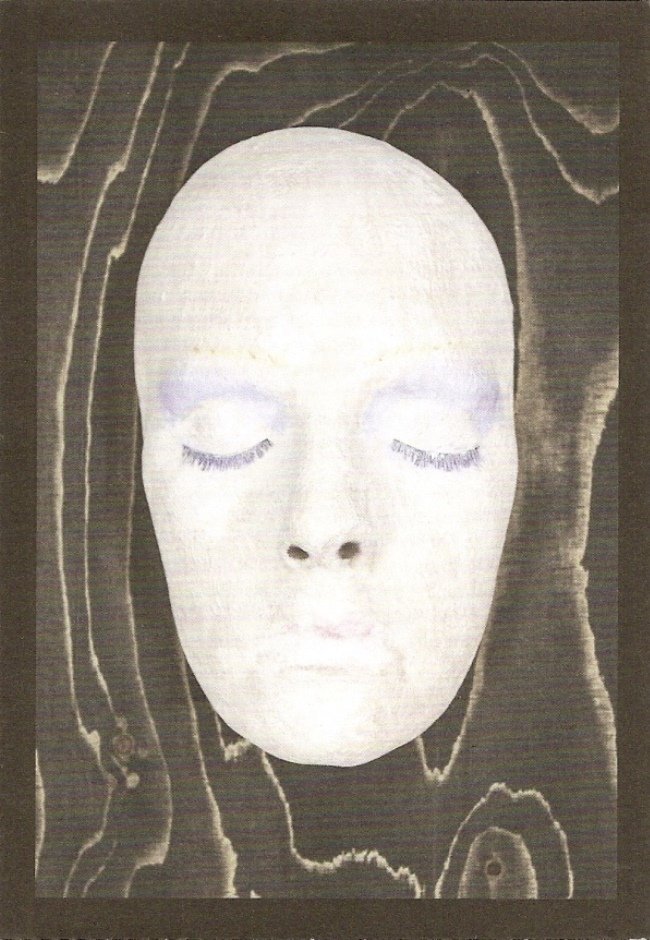 Key Looks: Pale Face, No Eyebrows, Heavy Use Of Powder

In this look, eyebrows were hidden under layers of  prosthetics, lips were toned down in natural beige and skin was left natural, to shift emphasis onto the eyes and lashes. False lashes were fashioned  into batwing shapes or fins, from feathers that were enamelled with black nail varnish.

Transformation and transgression were major inspirations behind this collection. Main influences were said to be Alexander McQueen’s research into WWII remedial plastic surgery. The set featured perspex tanks filled with water, which had black ink pumped into them in the second half of the show. After yellow rain fell onto the catwalk, black water was sprayed onto the models’ eyes by the make-up team backstage. This made their mascara run, as if caused by the precipitation. 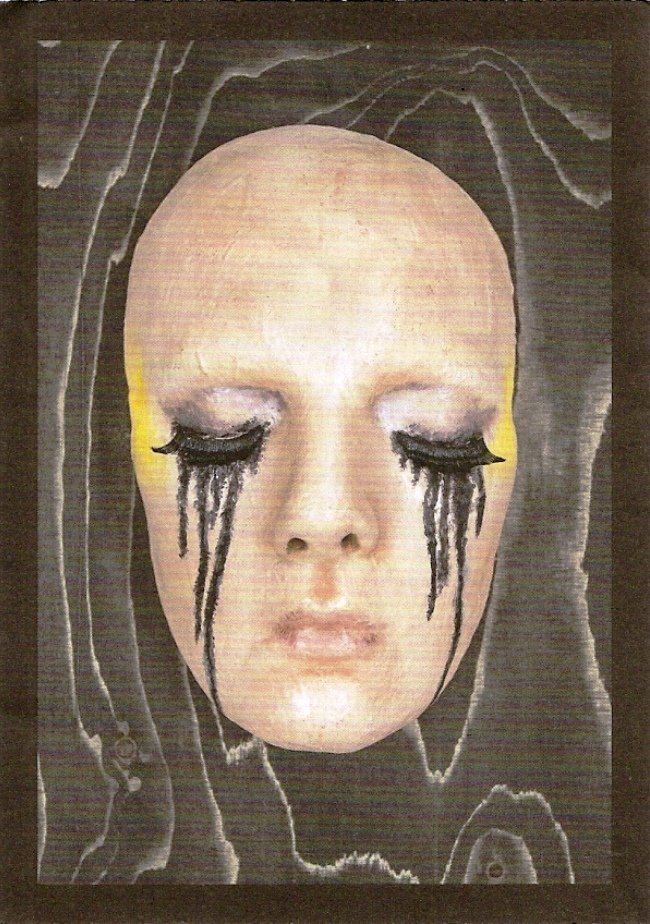 Surrounded by a semi-circle of black kohl, the oval shape of each eye was amplified. Eyebrows were emphasized, as was the trend at the time. Val Garland had to come up with a look that focused on the eyes – different from Cleopatra but evoking the same sense of mystery.

McQueen wanted the eyes to appear as those looking out of a Niqab, the veil Muslim woman wear to cover their faces. Middle-eastern influences featured heavily in the collection, shown in New York. Controversially, the catwalk was again covered with water, dyed with black ink to represent oil, touching on the neverending conflict it causes. 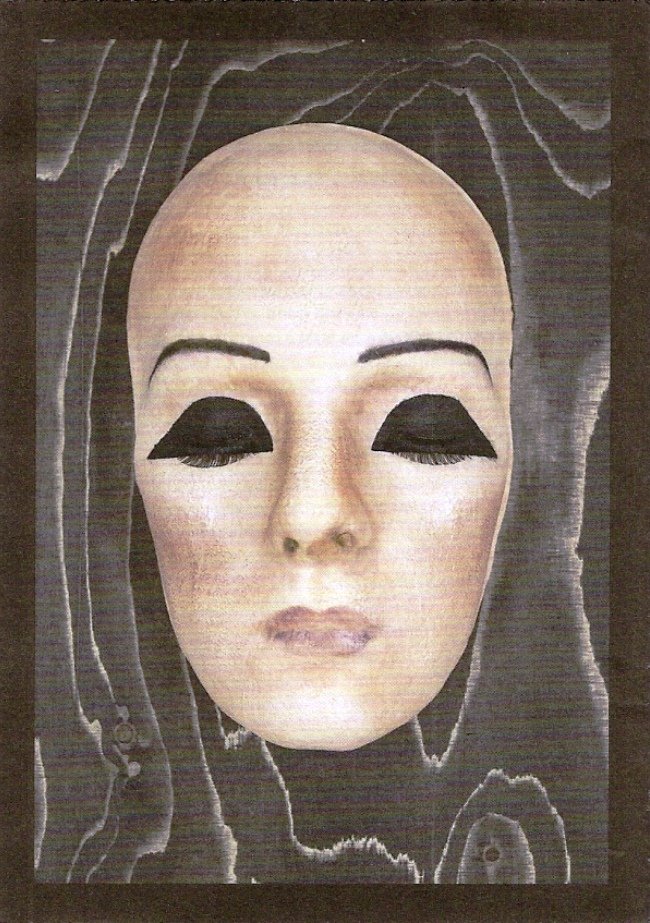 The collection featured three looks that portrayed the story of a ship-wrecked girl, who lands on a tropical island and undergoes a transformation from a warrior to a bird of paradise.

Showcased here is one of the three predominant looks from the catwalk – the one of the warrior, a striking look dominated by dark eye-shadow. The eyes were again the main focus of the look. They appeared much bigger due to the black shading that seemed to wrap them. A hollow gap was also clearly defined in the corner of each eye. There was a greasy sheen applied to the black shading, which created a vinyl look. Skin was buffed out to portray the models as out-of-this-world, serene super-beings. 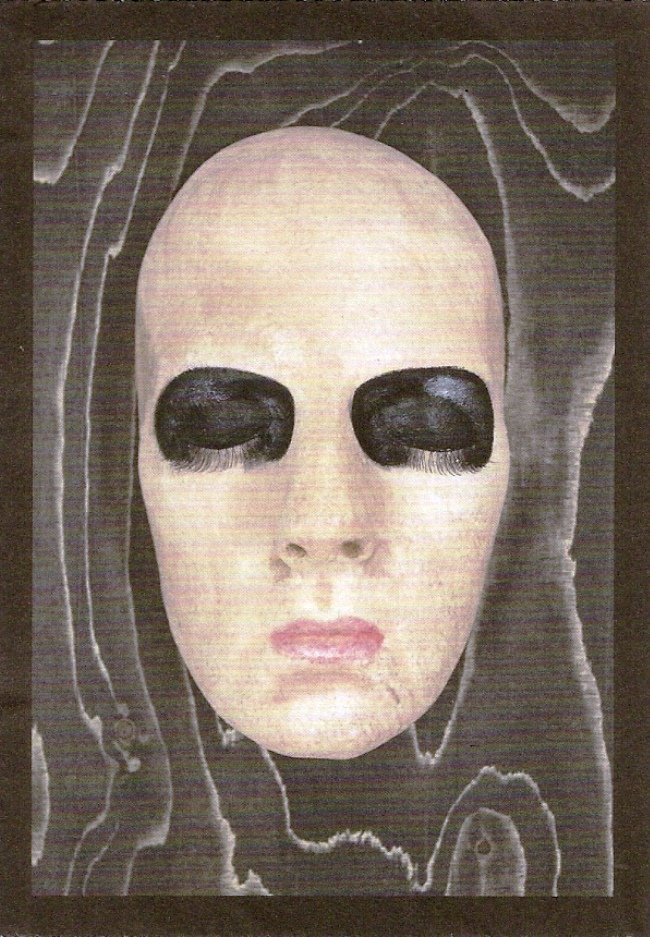 This look featured the ’60´s style of flicked black eyeliner and classic red lips, and natural brows and face, with a slightly powdered feel to the skin. An angular line above the eyeline brought this look into the modern day, giving it a contemporary twist.

This collection was a homage to the Hitchcock femme fatale: Tippi Hedren meets Marilyn Monroe, with echoes of Brigitte Bardot. Described as ‘librarian chic’, it featured jodhpurs, traditional Fair-Isle jumpers and Tweed. Although McQueen often referenced Alfred Hitchcock films in his collections, this one was the most obvious. Also referenced was American designer Charles James, a master tailor, among others. 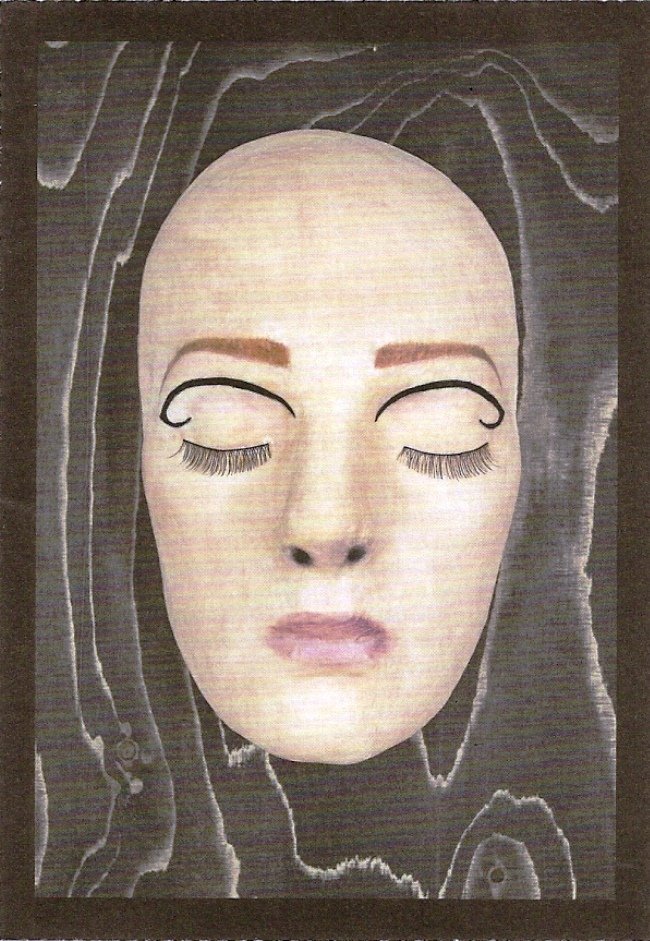 The main look was a metallic sheen, the silver version is displayed here, which started from the temples of the model, and followed under the eyes and down to the middle of the nose in a sharp point. This gave a mask-like feel. The rest of the make-up appeared very natural, and eyebrows were still strongly visible, creating a clear division.

The show was inspired by the life-size dolls produced by German artist Hans Bellmer in the ’30s. It featured restrictive jewellery by Shaun Leane, McQueen’s longstanding collaborator. 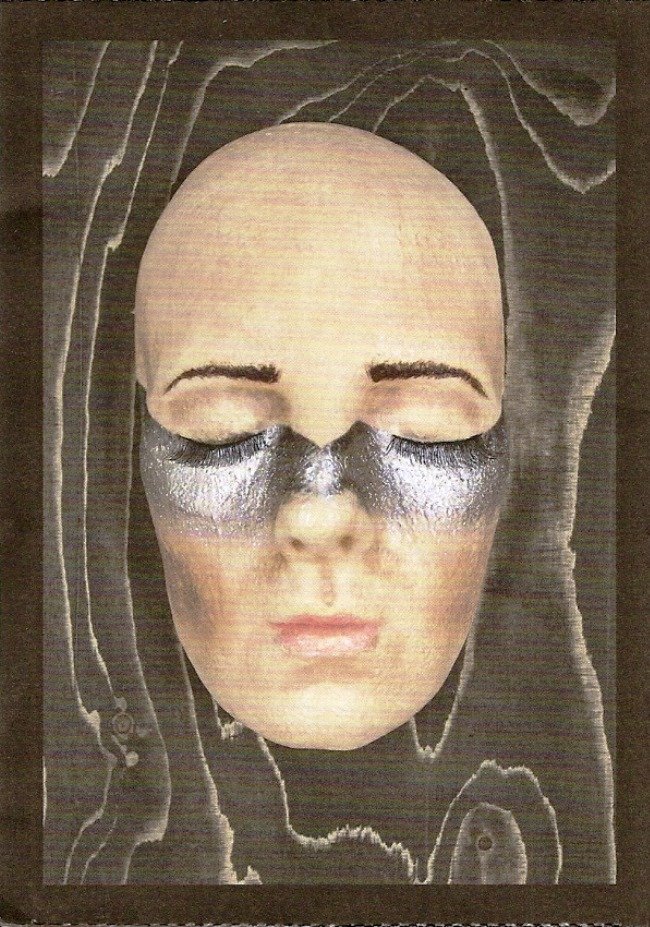 White crystals and glitter, sourced from a theatre supply store, were used to create this look. The make-up was applied in a square shape above the eyes, covering the eyebrows and spilling onto the forehead and nose. The overall appearance was again very mask-like, with the blunt square featuring prominently.

Influenced by and named from Stanley Kubrick’s horror film The Shining (1980), set in a hotel built on an ancient tribal burial ground, the look echoed a generic Native American style. The setting for the show was a winter wonderland and, as snow was falling and the models were skating, ironically there was a fire backstage in the hair and make-up room. 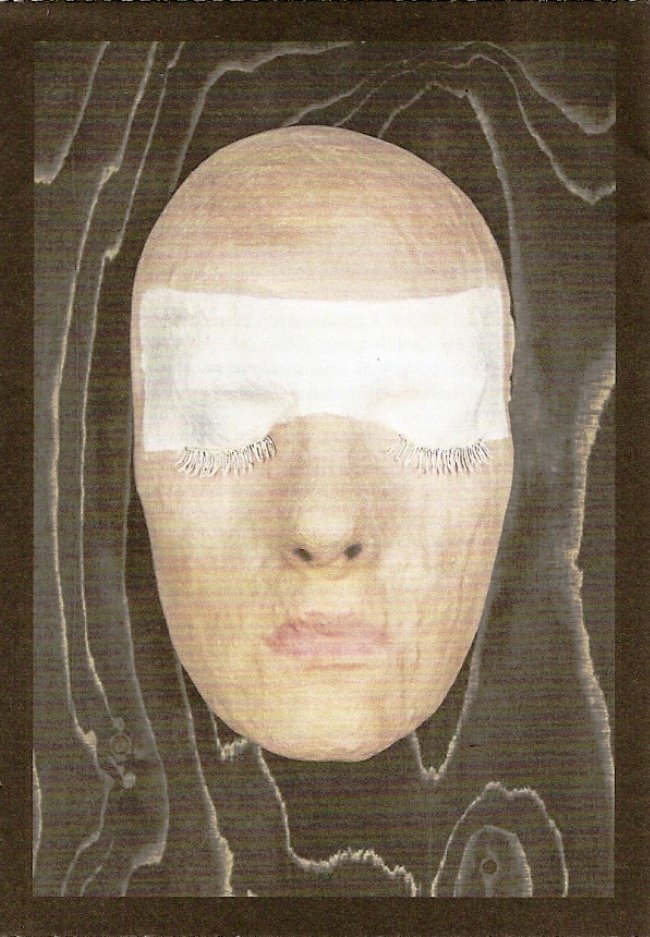 This macabre look escalated to the final tableau of five distinct clown looks on display here. Alexander McQueen wanted to jolt the viewer. To this day, this is one of his most iconic shows, largely because of the powerful make-up looks created by Val Garland.

She used strong black pencil to frame the lips and make the heart-shaped top lip more angular. She then used blood-red lipstick to stain the inner lip. The Bob Fosse film Cabaret (1972) was cited as the major influence on this collection. McQueen wanted the clowns to be perceived as not just a novelty but also childlike and cheeky by using metallic blues and reds. 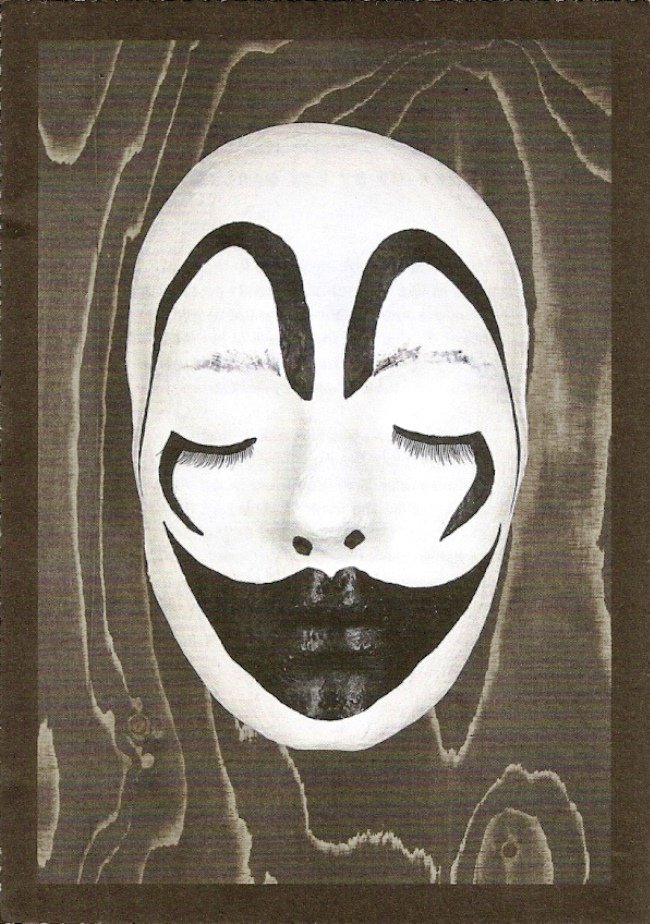 The show opened with a very natural, paired-back look, with slight lip gloss and brows kept natural. The looks then transformed, with the models’ faces getting gradually covered in more and more feathers. Each feather was meticulously applied to create a separate line while still following existing facial features. As the headpieces were so extreme, Peter Philips wanted the feathers to draw up the faces in the same way. Here, two iterations are shown.

This collection was a showcase of all McQueen’s Savile Row archive knowledge. He mixed his impeccable techniques and couture experience with dramatic fabrics and feathers. This show was a tribute to McQueen’s muse and patron Isabella Blow, who took her own life just months earlier. They both shared a love of birds and nature. 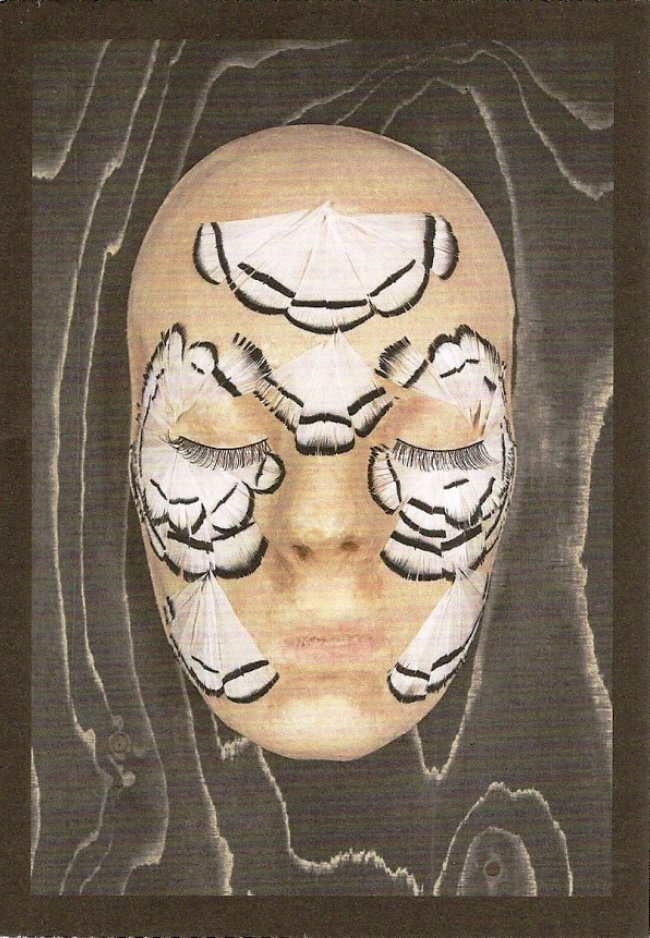 This look focused on the lips. Peter Philips took inspiration from clowns and ‘40´s Hollywood divas such as Joan Crawford. Lipstick was applied over the natural boundary of the lips in an oval shape, creating an overtly sexualized appearance similar to that of a sex doll.

All the looks remained constant throughout the show, with just the colour of the lips changing between a vibrant red, orange-red and black. In contrast, the models’ faces were extremely pale and their eyebrows blocked out. The colour scheme of black, white and red was a deliberately dramatic choice, which complemented the patterns and garments. The models’ heads were wrapped in plastic, using cans as curlers, in a nod to George Bernard Shaw’s poor little flower girl Eliza Doolittle. 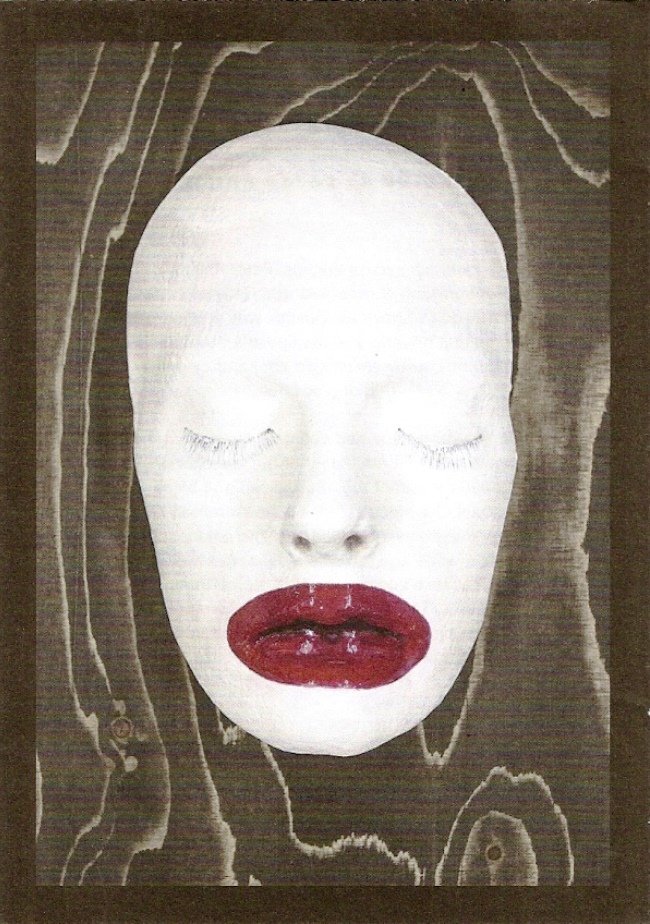 This look was created to follow a theme of other worldly creatures that evolved from an underwater species. Faces and lips were very pale, and eyelid shading made the eyes seem more linear than curved. The models were smothered in powder to give a pink, pearlized finish. Towards the end of the show the models appeared even more alien, with prosthetics applied to their cheekbones. This evolution is depicted here in a series of three looks that stagger the progression of exaggerated features.

Nature and evolution were major influences on the prints and overall aesthetic of the collection. This was a total look that encompassed every last detail to fit an imaginary world, from accessories and hair to shapeshifting make-up. 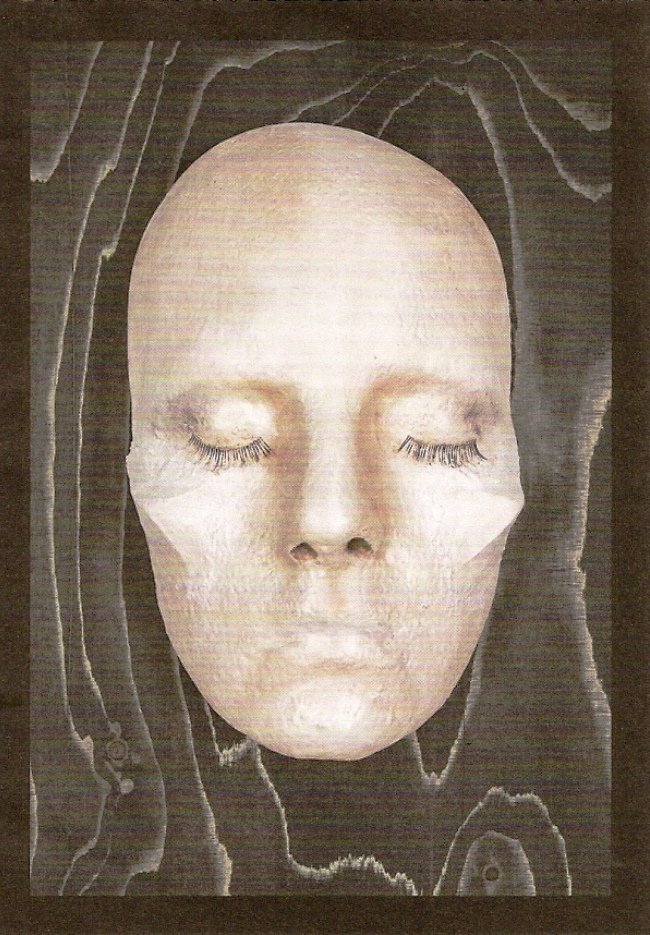 WAR PAINT is just an example of one of the numerous fashion exhibitions taking place in the Victoria & Albert Museum and London College of Fashion. With very special thanks to Polona Dolzan at the Fashion Space Gallery for exclusive rights.