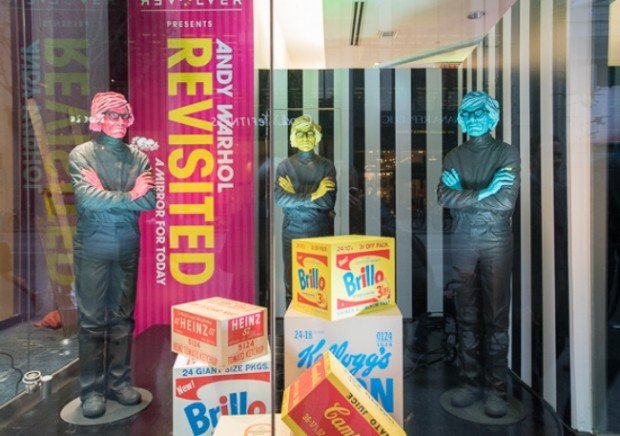 With the advent of reality television programmes and a promise of over-night fame, there is an increasing number of people today desperate for their ´15 minutes of fame.´ Little did they know that this resounding prediction came from a New York illustrator many before Big Brother was even thought of.

Andy Warhol, one of America’s most successful art exports, has enjoyed one of the most diverse, colourful (and twisted) careers known to date. The artist practically invented pop-art, made Campbell’s soup and Brillo Pads a household brand as well as apparently filming his friend jumping to suicide. In his spare time, he hung out in Studio 54 with Bianca Jagger, Edie Sedgewick and Diane Von Furstenberg during his residency with his company ´The Factory.´

40 years on and 550 kilometres North East, Andy´s talents once again ignite a cities atmosphere. On the 1st July, in a former department store ´Andy Warhol Revisited: A Mirror For Today´ was opened to the general public in downtown Toronto. According to the organiser Ron Rivlin ´If Andy Warhol opened a gallery in Toronto; it would be smack dab in the middle of Yorkville.´

Since the American born, Torontonian raised entrepreneur brought his comprehensive collection of original Warhol prints and paintings to Toronto, the media have claimed it to be the largest Warhol exhibition ever to come to Canada, to date.

When I was thinking where do I want to be? I was thinking Yorkville because I was thinking that’s where Andy would have had it. It’s the hub of fashion and the finance world. He was obsessed with money and fashion – Ron Rivlin

Having left Canada for L.A. 17 years ago to pursue a career in music, he became a talent manager for acts such as Busta Rhymes. It was there, he fell in love with Warhol and purchased his first piece just over three years ago. His collection quickly expanded to more than 100 works when he inaugurated his ´Revolver Gallery´- a Warhol dedicated space with art for sale. “I’m drawn to the simplicity and power of his art,” he said. “He would bring out the vibrancy of a mundane image and glamorize it.¨

The current exhibition will showcase more than 120 original prints and paintings, mostly from Rivlin’s personal collection and some on loan from other private owners. The works will include pieces from Warhol’s famous Marilyn Monroe, Elizabeth Taylor and Campbell’s Soup series to name a few. “I can say with certainty that many people in Toronto haven’t seen many of the works that we’re going to be bringing in,”

The Bloor street intersection with Bay will be Toronto´s homage to Warhol until the end of the year. Rivlin hopes that “dead centre Toronto” will draw a diverse crowd, including students. Out with this event (and depending on the exhibition’s success), Rivlin is also considering opening a permanent Warhol space in the city. “I just think it’s a culturally rich city where people will embrace this,” he said. “I’m ecstatic.¨

PREVIOUSTHE MOST STYLISH WOMAN IN PARIS