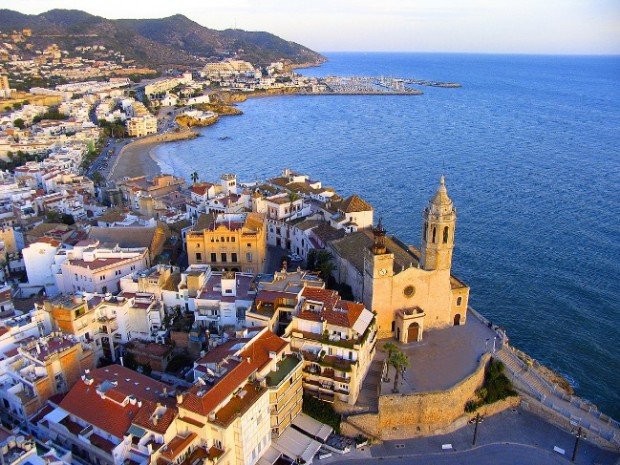 Sitges has many endearing qualities. From bohemian fiestas and social equality to dancing giants and vintage car races. These yearly celebrations help to enrich the Catalans social diary with their broad range of cultural and patrimonial orientated episodes. But, what if there was another side to this pearl of the Mediterranean. A chilling one, which could leave you quite literally terrified.

October sees the 47th instalment of the Sitges (International Fantastic Film) Festival of Catalunya. Hailed by Empire magazine as ´the number one fantasy film festival in the world,´ this established 10 day  spectacle of all things terror presents a multitude of exhibitions, presentations, some 234 screenings and discourses of horror films from all over the world.

Fiesta Internacinale del Cinema Fantastic de Catalunya is presided over by its governing Foundation which is composed of representatives from the Sitges Town Council, Generalitat de Catalunya (Catalonia’s autonomous government.) Melia Sitges, Moritz and other institutions, associations and private companies make up its sponsorship resources and platforms for international branding.

Staying true to their previous macabre themed advertising direction, this year’s campaign is based on Brad Pitt’s 1995 neo-noir psychological thriller Se7en, with a bloody torn box image paying homage it.

The shores of this historic fishing town are also an essential rendezvous for any serious movie technophile eager to come into contact with new trends and technologies applied to film and the audio-visual world. Discussions, methods and workshops bring these celluloid dreams into reality at specified times.

Parallel events out-with the multiple screenings will allow attendees to encounter ´Exposition – Dossier Sinclair: The Art of Vincente Ballestar,´ one of the creators of the dark pulp and realistic supernatural genres which rocketed him to fame with the covers of Ghosthunter and Pulp magazines for the 70’s, 80’s and 90’s in all its saturated pop coloured glory (think Dario Argento).

A more light hearted look at the industry takes place on the tenth night of October when ´the dead take to street for their revenge upon the living.´ This may sound like a quite from Homers Odyssey, but it describes the annual zombie walk where by attendees, residents and spectators go out to sea with their theatrical make up and clothing to take part in the official zombie walk  through the town centre. And quite a spectacle it is.

Nine different capacities scattered throughout the town centre will act as cinematic venues. From the imposing Melia Sitges to the infamous Cine Prado, these will perform as meeting, viewing and discussion platforms, as well as presiding at the multiple awards ceremonies, from Nosferatu to the Grand Honorary Award towards the close of the festival.

Ticket costs and availability vary according to the location and status. Matinee, Auditoir and VIP seats allow viewing opportunities from early morning to late night every day from the 9th – 18th October, subject to conditions. You can visit the official website for the full timetable of events and viewings here.

So, if you find yourself torn between the devil and the deep blue sea, then pop into this annual film festival. But don´t leave the tickets too late as they get soul-ed out early.