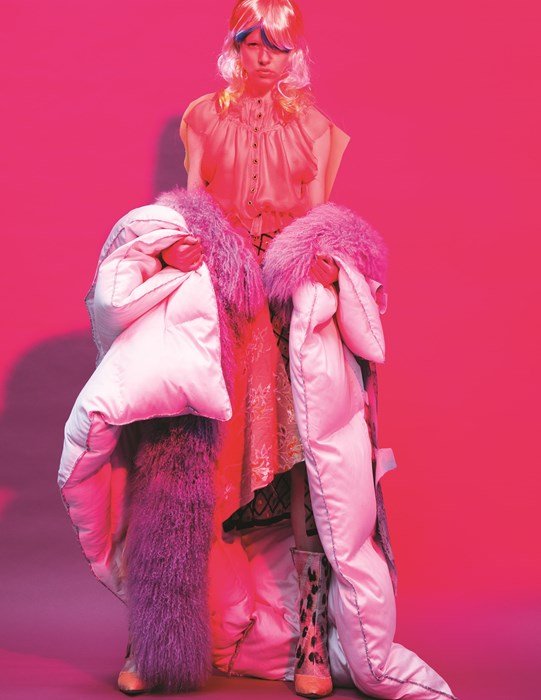 As fashion schools go, it´s not only one of the most famous in the world, but also one of the most creative. Antwerp’s Royal Academy of Arts is the famed institution that taught Avant-Garde designers such as Ann Demeulemeester, Martin Margiela and Dries Van Noten. Its end of year shows are noted for their spectacular showcases of creativity and workmanship that are so detailed that they are spread over three days.

The stands out collections for all students, first to fourth year – are placed before a panel that includes the infamous Walter Van Beirendonck, Colin McDowell and Simone Rocha amongst others. If there´s one thing that´s a sure certainty over the years, it´s that there will be the highest levels of passion, innovation and a fearless mentality from those who are destined to succeed within this cutting edge college. With this is mind, here is a rundown of the top five of the school´s graduate bank, of whom you will be hearing a lot more about in the future. 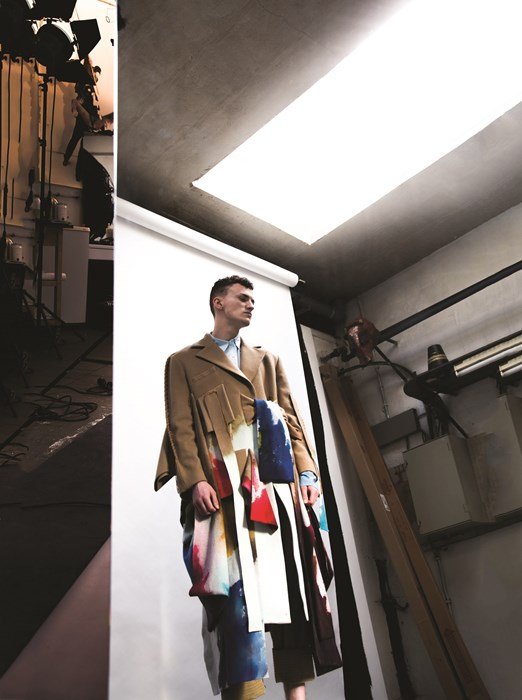 “You can say that you’re on the brink of insanity, on the brink of consciousness, on the brink of something,” explains Timo Zündorf. Coining his graduate collection “Brink”, Zündorf explores the personality and intimacy of clothing. Whilst two contrasting images, an August Sander photograph of three men in well-tailored suits and one of three punks sat in full leathers on the street in London, provided the starting point for the collection, Zündorf’s fascination lay within the value system behind the clothing. “In terms of how we interact with fashion today, but also how the world around us currently is, I wanted the garments to be something very precious, something very intimate, something very personal,” explains Zündorf. “At one point I used the term ‘emotional clothing’ for it. So then the question was, ‘Emotional, but in what way?’ Clothes are something that carry you out into the world. It’s a border you overstep; it’s what you expose, so I constructed the collection as a spectrum of emotion.” 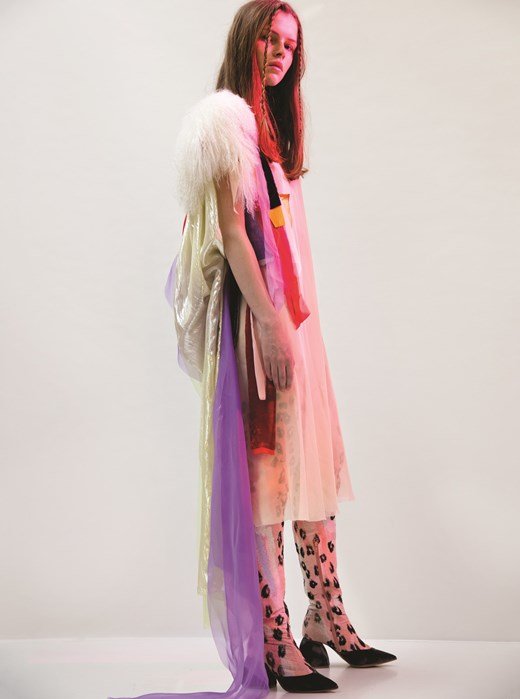 Using Jean Cocteau’s La Belle et est la Bête as a starting point, Jennifer Dols created both a collection and a fairy-tale for her graduate show. “This is the tale of the beauty who is also the beast, I dirtied the tale and made a new beauty, I show Belle her modern self, a Jekyll and Hyde personality, a werewolf,” read the start of Dols’ self-written tale. Setting out to question common ideals of beauty and how we define it, Dols’ collection was texture heavy with materials as rich as the multi-layered meanings behind them. Think dreamy ice cream-hued lace and chiffon dresses, animalistic fur outerwear embellished with oversized gems that were symbolic of tears, and high-knee boots with abnormally shaped calf panels that signified Belle’s transition into a werewolf. 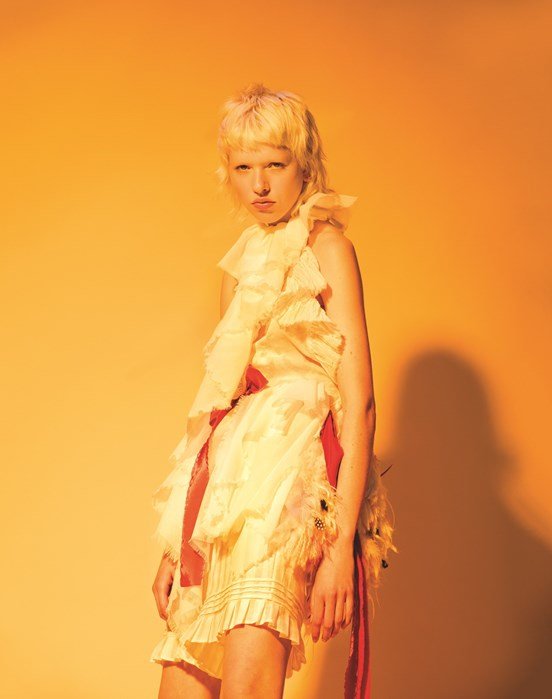 Crowning his graduate collection “The Wild Bunch”, the film Picnic at Hanging Rock was the starting point for Shone Puipia’s debut offering. Telling the story of a group of Victorian school girls who vanish during a picnic in the woods before entering a parallel universe, Puipia’s collection provides a new ending to the story. “I wanted to transport these girls to a new world,” he explains. “During the journey they transform, they become wilder, rougher.” Think silhouettes and design traits synonymous with the Victorian era, exaggerated cuffs, full-bodied frills and high necklines, fabricated from raw frayed denim and skirts and dresses constructed from strips of fabric, that the girls put together on their journey through the woods. Also featuring technicolour fur pieces created using a needle-felting technique; Puipia’s collection was wildly romantic and carefree. 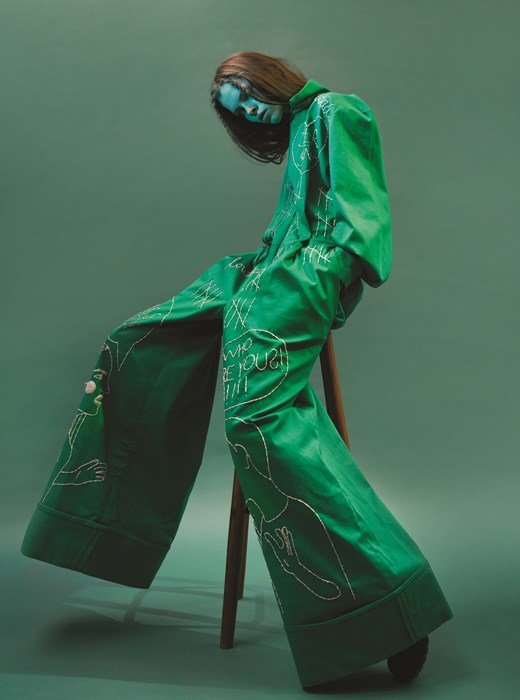 Jannike Sommar looked to the female inmates of Orange Is the New Black’s Litchfield Penitentiary Prison for inspiration when it came to designing her collection, “Miss”. “These women all have to wear the same oversized clothing, but they all have different personalities, so they take what they find in prison to style themselves,” explains Sommar. “It’s not my story, so I tried to make it more personal along the way. My girlfriend’s living in France, so I kind of pretended she was in prison and I wrote a love letter for her which I embroidered onto a sheet before turning it into a dress.” Sommar’s own tattoo designs also transform into delicate embroidery on dresses and jackets, whilst the phrases “locked up” and “meet me in the puss puss” sit alongside tallied numbers, a countdown of days spent in prison, no less. 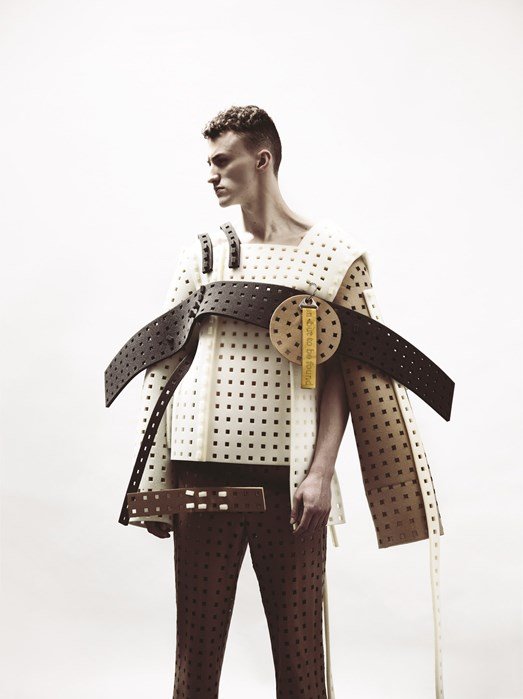 Barring certain similarities to a piece of Ikea flat-pack furniture, Emmanuel Ryngaert’s graduate collection was modular, innovative and almost entirely stitch-free. “It got me thinking, there’s modular furniture, modular housing, but why is there no fashion that’s modular?” explains Ryngaert. Taking inspiration from the shapes and proportions of children’s toys Meccano and Lego, Ryngaert’s collection ranged from wearable (a denim suit appliqued with a foam and Perspex rosette), to obscure (a laser-cut foam three piece suit, systematically constructed by way of concatenating pieces). Also posing the question, “How much (fabric) can you remove before it stops being a garment, but is only a shape?”, Ryngaert prides himself on designing unique pieces from scratch, rather than working with archetypes.