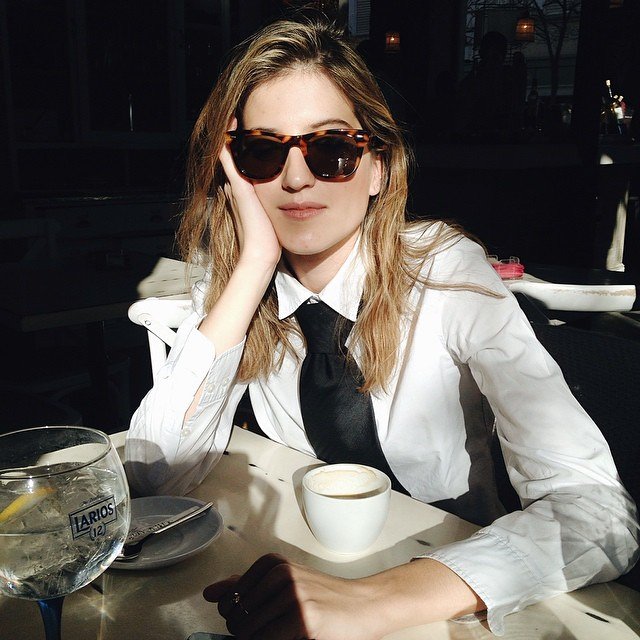 If you go to the streets of Madrid, you will see the Loewe puzzle bag hung over the arms of every fashion conscious chica in the know. To some observers ( both inside and outside the fashion scene), it would seem that there is a style revolution taking place, with many notions as to its purpose and origin – a  point which many Madrileño´s are quick to say is nothing to do with the increasing influence of British and Georgian designers in the city.

Twenty four year old art director Ines Ybarra is one of the Spain´s most stylish natives who currently calls Madrid home. Her thoughts on this modern day renaissance vary somewhat from that of the others who grace the contemporary Calles of Barrio Salamanca. Ybarra looks towards the zeitgeist and the mood of the street where, to her, the growing presence of young, native designers is what’s currently pushing Spain to the forefront of the fashion world.

“ In general, people dress very elegantly in Madrid. When I dress, I’m probably influenced by the older men – I love how they wear berets. I also love to combine blazers with trousers and skirts like older women do. It’s hard to tell what has influenced me the most as there are loads of things to absorb in this country. ” – Ines Ybarra

Fashion is certainly a talent that´s in Ybarra´s blood. Whilst currently enjoying collaborations with venerated designers as Sybilla and being chosen as the face of campaigns for design newcomers such as Paloma Wool, Ybarra is very much in the hub of this effervescent creative Spanish world.

Since returning to her native Spain after a sabbatical at London art school, Ybarra has a revived interest in her Madrid; from its majestic gallery spaces to intimate plazas in fashionable neighbourhoods, each and every day acts as a narrative which pays homage to Spain´s long, rich art pedigree, and in doing so, she has integrated the city´s distinctive sense of elegance into her own personal aesthetic. Ybarra took time out to speak about why Madrid is the future of Spanish fashion and why it´s breakout designers are set for international acclaim. 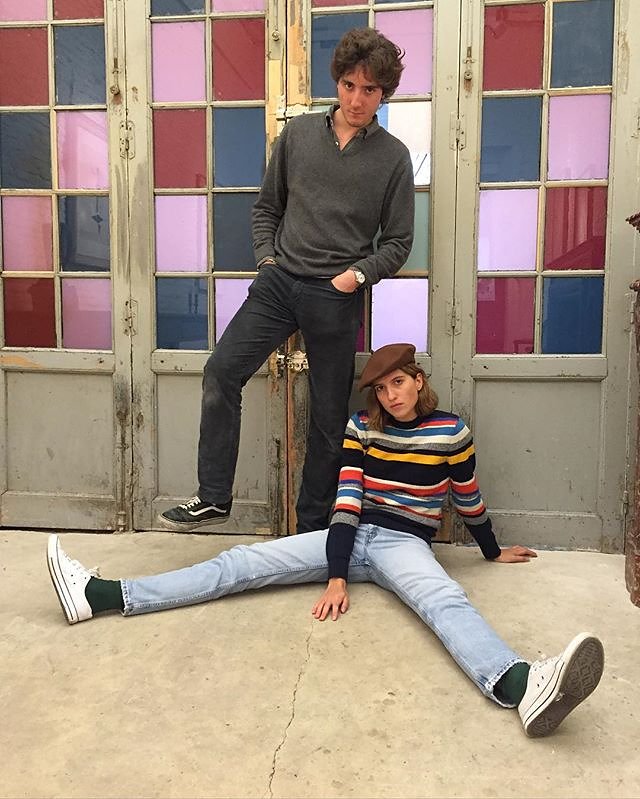 “I remember that one of the first things I did when I came back to Madrid was to investigate the city’s wide array of unique shooting locations. I read all the blogs I could find to discover unique and interesting places – I even used Google Maps to study all the parks and lakes I didn’t know. At the age of 24, I finally started to properly get to know the city I have lived in for so long.”

“We have so many talented upcoming artists such as Juan Garaizabal, who makes beautiful sculptures, and performing artists like Filip Custic and Kito Muñoz. My favorite gallery in Madrid is without a doubt Javier Lopez & Fer Frances on the outskirts of the city, hosted in a gorgeous modern house. I also love The Goma, Machado-Muñoz, Ivorypress, and Galería Marta Cervera. My favorite museum would have to be the Reina Sofía. It’s not necessarily the one with the best private collection, but I just love walking down those wide corridors with super high ceilings. The museum that I feel has the best exhibitions is the MAPFRE Foundation, but I also love the CaixaForum and the Thyssen-Bornemisza Museum.”

“I see everyone wearing loads of vintage pieces or vintage imitation. But I guess the same is happening in the U.S., especially with brands such as Maryam Nassir Zadeh and Mansur Gavriel and online shops like Lisa Says Gah. With local designers like Sybilla, her clothes adapt to all kinds of women. You just don’t want to take off Paco Pintón’s unique sweaters. His bombers are also very cool. Malababa are experts in leather and Babaà Knitwear is the best knitwear for adults and children. The best brand to work with apart from Sybilla is probably Paloma Wool – the creativity and experimentation going on at her studio is brilliant.”

Taking Cues from the Older Generation

“In general, people dress very elegantly in Madrid. When I dress I’m probably influenced by the older men—I love how they wear berets. I also love to combine blazers with trousers and skirts like older women do. It’s hard to tell what has influenced me the most. There are loads of things to absorb in this country! We have had so many great artists in this country, like Velázquez, Goya, Joan Miró, and Picasso. In architecture we had Gaudí, and now we have super-talented people such as Ricardo Bofill or Xavier Corbero, who is a sculptor and architect. Musically, we had Lola Flores, Marisol, and Paco de Lucia: Their musical artistry has now been carried on by other great Spanish singers like Rocio Jurado, Farruquito, and Isabel Pantoja. Although I’m not so sure whether they owe their fame to their talent or their polemical lives!” 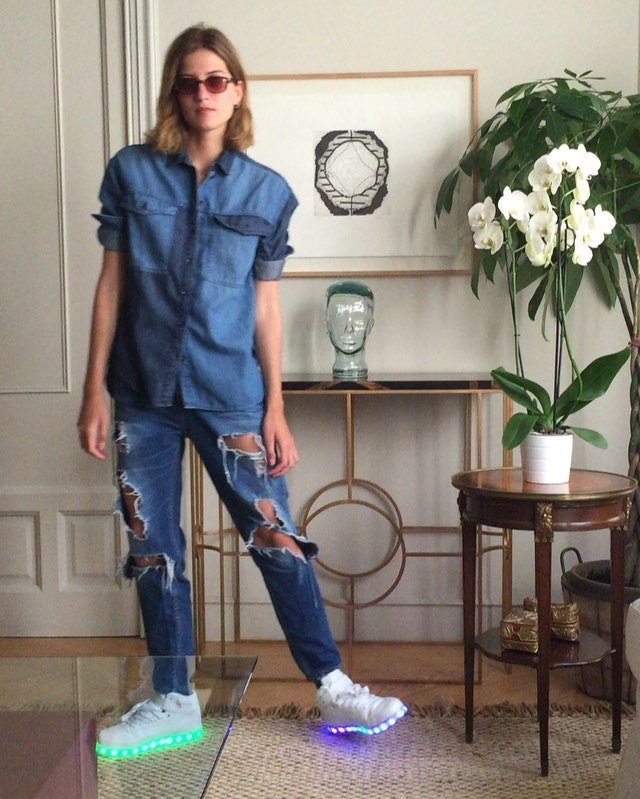 The Style Of Ines Ybarra

A Spanish Style Renaissance Is Afoot

“The essence of Balenciaga is no longer here, neither is the essence of Spain in their designs. There are more interesting things going on here. At Loewe, Jonathan Anderson has managed to keep the essence of Madrid by collaborating with people like Fass Films, a young film production company I just joined. Luis Venegas is the founder, editor, and publisher of Candy, EY! Magateen, Electric Youth!, Fanzine137, and The Printed Dog. Interestingly, Madrid is going through a second Movida Madrileña – a countercultural movement that took place mainly in Madrid in the ’80s that was characterized by freedom of expression and transgression of the taboos. Director Pedro Almodóvar became the best-known example internationally of this movement. The new people in this Movida are Sita Abellan, Angela Huete, Filip Custic, Juan Ortega, Javier de la Blanca, and Aaliyah Rosales.”

But Her Favorite Restaurants Are Cultural Institutions

“I’m really inspired by Bar Cock, where all the creative people have been meeting for 30 years. I also love Bar La Venencia – it opened in 1922 and they only serve food and wines from Cadiz, a city in the south of Spain, so if you want a Coke or a beer, I’m afraid its not the place. Toni2 Piano Bar is open all day and all night, it’s by far my favorite – my friends and I go there between 4:00 and 6:00 a.m., and there are people singing typical Flamenco songs by the pianoforte.”

The Best in Spanish Shopping

“In the neighborhood Malasaña, all the restaurants there are just so diverse; it’s also where all the vintage stores are. I love Lolina Vintage – they serve the best coffee. Ojalá by Andrés Jaque is also very cool – it has a room filled with sand and puffs downstairs. Tuuulibreria is a place where you decide how much you want to pay for a book. For shoes, About Arianne, Magro Cardona, Bimba y Lola, and Mint and Rose are the best. Bimba y Lola also has the best jewelry, along with Malababa, Them Bones Jewelry, and Sansoeurs.”

“It’s going to be even bigger than what it is now. The only thing Spain is missing is good fashion shows, which is always great propaganda for a city. But when you think about it, the shows from Delpozo by Josep Font in New York are a representation of Spain. The shows from Loewe in Paris represent Spain. Zara is the biggest fashion company in the world with Mango close behind, and they are both Spanish brands.”